Exciting remakes and fandom favourites coming to theatres near you

Looking at the list of box office hits this year, it may be a little hard to tell what year it really is. Have we travelled back to our childhood or are cinemas across North America capitalizing on our need for nostalgia?

People in multiple fandoms are also on the edge of their seat this year as big conclusions and origin stories will be hitting theatres. They’ll finally be satisfied from big cliffhanger endings in the Marvel Universe and Star Wars franchise –– or will they?

Marvel has been steamrolling box office records for the past several years, churning out successful classics. The Marvel Universe keeps getting bigger as they continue adding to their sequential releases. If you’ve yet to see Avengers: Infinity War, there may be some spoilers.

Captain Marvel comes out this March starring Brie Larson. Although it doesn’t fit in the timeline it is a flashback to the 1990s, and speculation says that it should reveal how the Avengers might survive Thanos’ wrath. 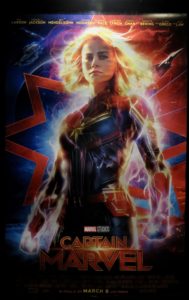 Don’t worry Marvel fans, Avengers: Endgame is coming out at the end of April. The second part of the Infinity War should bring resolution to the problems Thanos created for the heroes of the Marvel Universe. Rumour has it though that we may have to say good-bye to a favourite character or two.

July sees the return of Spider-Man in Spider-Man: Far From Home. Tom Holland returns to the role after the Infinity War has ended, so spoiler I guess he won’t be one of the characters we have to bid farewell. Jake Gyllenhaal will appear as the villain, Mysterio.

Although the X-Men are in the Marvel Comics Universe, they have been noticeably absent from the sequential releases of movies leading up to and following the Avengers. Dark Phoenix, however, will hopefully fix some X-Men fans disappointment with how the franchise has been handled up until now. The movie comes out early June and features Jennifer Lawrence and Sophie Turner. Dark Phoenix is supposed to highlight one of the X-Men’s most loved characters Jean Gray (Turner) in hopes to rekindle some love from fans.

Star Wars fans rejoice as J.J. Abrams returns to the director’s chair for Star Wars: Episode IX. The third part of the trio of sequels released over the last couple of years is set to hit theatres in late December.

Not much has been said about the film yet, but as always there are lots of rumours surfacing. One thing is for sure, it will feature the return of Adam Driver’s, Kylo Ren, Daisy Ridley, and John Boyega. This is supposed to be the finale for the Star Wars series so fans should prepare themselves for the best and the worst.

Shazam! Starring Zachary Levi will hit theatres in early April. An origin story from DC comics features a teenager who receives the power to turn into an adult superhero with the abilities of super strength and flight.

Fans are hoping that this film will break the DC darkness that has resulted in some disappointment for comic book fans in the DC Universe.

The talented Tim Burton will take on a live-action remake of Dumbo in April. The original from 1941 tells the classic story of a circus elephant that had all of our millennial heartstrings being pulled in different directions. Although Tim Burton seems like an odd pairing for such a heartwarming story, the trailer has people convinced it was a pretty good choice. 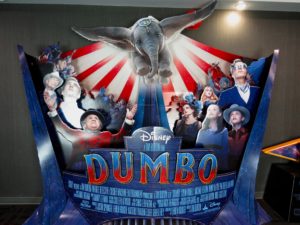 The original animated version of Dumbo was released 78 years ago in 1941. This version is set to release on March 29. Photo by Grace Mason-Parkinson

Aladdin is also getting the live-action remake treatment this May. First released in 1992, the animated classic featured the late Robin Williams as the genie, who will now be played by Will Smith, and some classic Disney movie magic to bring the rest of the tale to life. The movie has received some scrutiny for whitewashing the cast of one of the few Disney films about people of colour.

Step aside toddlers and children, us university students are ready for Toy Story 4 which comes out in June. Since the first Toy Story was made in 1995 expect a bit of an older crowd in the theatre for this classic. We laughed and cried for Toy Story 3, but left many fans satisfied with what everyone thought was the finale.

So what are they going to do to us in this one? Guess we’ll have to wait and see where Woody, Buzz and the gang end up this time.

The much anticipated The Lion King live-action remake will hit theatres in July. Director Jon Favreau returns to Disney remakes after great success with The Jungle Book, but this time he has an all-star cast with him. Some big names such as Beyoncé, Donald Glover and James Earl Jones will take on the classic rolls. If you’re going to remake a beloved favourite, I guess there’s no other way than go big or go home.

Disney is playing with fire, or well I guess ice, by introducing a sequel to their very successful Frozen in November with Frozen 2. Both original directors and the original cast return for the sequel that will have everyone singing along and wanting to build a snowman.

With so many great movies coming out it’s going to be hard for students to find either the money or the time to get their butts to the theatres.

However, there are reduced pricing nights on Tuesdays. Scene members can also receive an even further 10 per cent discount, and with all these new movies it might be a good time to get one of those Scene cards people are always bugging you about at the theatre.