Andromeda is colliding with the Milky Way – in four billion years

On September 22 the Halifax Planetarium hosted a free astronomy show as part of this year’s Science Literacy Week: a nationwide showcase of Canadian science with partners like museums, universities and libraries.

Tucked away in a dim corner room at Dalhousie University, there is a dome that takes up the whole space and looms up into the ceiling. It’s covered with squares of faded cream and blue fabric and looks like an extra-large, round tent. It’s a bit shabby and the equipment inside hails from the 1950s, but although it’s a little noisy, the projector gets the job done.

That’s the Halifax Planetarium – the only one in the city and one of the first in Canada.

The Planetarium was plunged into darkness for an hour, with pinpricks of light dotting the roof of the dome. About 30 people had the chance to learn about locating constellations, planets and galaxies visible in the autumn sky from presenter Patrick Kelly. 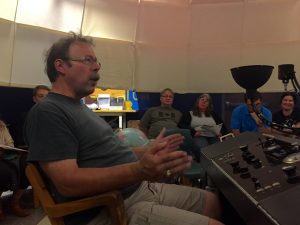 Science literacy is important to helping people understand the world they live in and how it works, said Kelly, especially in the current technological age.

“Most people are interested in some aspect of science. Find a subject where they’re giving some talks on it and just go,” he said. “Learn. Listen.”

That’s why Joanne Cass came to the show. Cass, a Halifax resident who grew up in Cape Breton, just got a telescope and is learning how to use it. She needed help decoding the complexities of the night sky.

“I grew up looking at the stars. But I didn’t know where anything was.”

“You don’t have to go get a science degree to understand more about your world,” Cass said. “I think that’s important. Whether it’s your food, your environment, your earth, your weather or the stars.”

Among many cosmic occurrences, the main topic of the Planetarium show was locating the Andromeda galaxy, the closest and largest galaxy to our own Milky Way, at 2.3 million light-years away. If it’s a clear night, Andromeda can be seen with the naked eye in the western region of the sky.

“Most [galaxies] you can’t see without using binoculars or a telescope,” said Kelly. “But Andromeda, you can just see it with your eyes, as long as you’re in a nice dark spot.”

“It’s kind of hard not to miss, once you’ve sort of seen it, to know what to look for.”

Being further away from city lights and light pollution lends a better view of the night sky. Andromeda shines as a hazy smudge in the sky, about as bright as the moon. It might not be visible to the unaided eye inside the city. 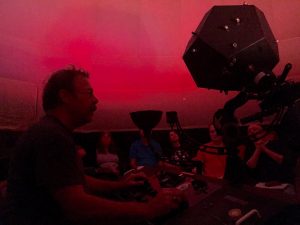 In reality, the human eye isn’t sensitive enough to see most of Andromeda anyway, says Kelly. The part we see is only the very brightest cluster of stars that make up the galaxy. The rest of Andromeda actually spreads out across the sky, much like the Milky Way.

Astronomers might be able to see Andromeda up close in the future, but not for a long time. That is, until Andromeda is set to collide with the Milky Way – in about four billion years.