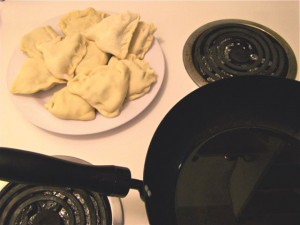 In the early 1970s, Robert Atkins came up with a diet that would become wildly popular in the early 2000s, after a slight reinvention. Originally, the diet involved drastically limiting a person’s consumption of carbohydrates in order to alter their metabolism; the idea was that people would lose weight and therefore become happier and healthier.

Sucks to you, Atkins diet! I like carbohydrates. They make me happy. Plus, with all the walking I’ve been doing since the Halifax transit strike started, I could use the extra carbs for energy. And what better way to get them than in the form of potato and lentil samosas?

As far as doughs go, this recipe is pretty easy. Mix the flour, salt and oil in a bowl. With oil-greased hands, pour in the water and work the ingredients until you’ve got a firm, but elastic, dough (you might need a little extra water for this). Then, placing your ball of dough on a lightly floured surface, knead for a couple minutes until your dough is nice and uniform. Rub a little bit of oil on the dough and set it aside for at least 20 minutes.

The potatoes and lentils can be cooked simultaneously. Boil your diced potatoes until they’re cooked, but not mushy (about 20 min). In another pot, bring the lentils and water to a boil, and add half a teaspoon of masala and half a teaspoon of coriander. If the lentils absorb the water too quickly, add an extra quarter cup of water to be safe. Once the lentils have been boiling for about 10 minutes, reduce heat to medium and simmer. Stir every few minutes with a wooden spoon to prevent them from sticking to the bottom of the pot. After another 20-25 minutes the water should be absorbed, and the lentils should be nice and mushy. Turn off the heat and let cool for a few minutes.

On medium heat, put the three tablespoons of oil in a frying pan. Throw in the cumin, coriander, cayenne and masala, followed by the peas (if using frozen peas, be sure to thaw/rinse them first). After about a minute, toss in the cooked potatoes and add the sugar and salt. Cook for two more minutes, stirring frequently. Add the cooked lentils and mix everything together. After about a minute, remove from heat and let cool.

Divide the dough into five or six balls. On a lightly floured surface, roll out each ball into a circle, six inches in diameter. Then use a sharp knife to cut each circle in half.

Here’s where it gets a little tricky: Starting with the first half-circle, dab a little cold water along the edges. Form the semi-circle of dough into a cone by bringing together and firmly closing the two halves of the straight edge. Holding the cone loosely in your hand (as you would an ice cream cone), pack in as much of the filling as you can, leaving room to seal the top. When you seal the top, do not leave any openings. Pinch the edges tightly together. Repeat this for each half-circle of dough.

Put about two cups of oil in a wok or deep skillet, and set the stove to med-high. Use a little crumb of dough to test the oil. If it starts to sizzle right away, you’re good to go. Throw in as many samosas as can fit in the oil, and cook for about five minutes on each side or until golden brown. When they’re done cooking, let them cool on top of a paper towel for a few minutes. (If you like, you can save the remaining oil for future use.)

Now you can flip Atkins the bird and enjoy your meal.