Fashion profile: Nothing is sweeter than Sweet Pea! 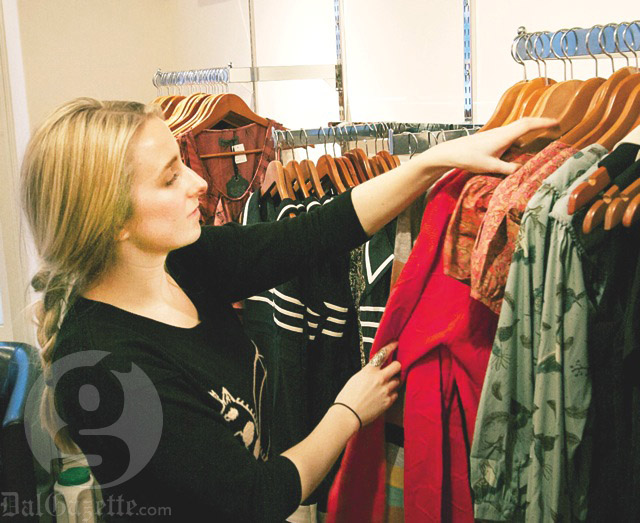 Enter to win a $25 Sweet Pea gift card, and chance to be featured in an upcoming Gazette fashion feature. Photo by Alice Hebb

Though not yet five years old, Sweet Pea Boutique has already become a staple store for Halifax shopping. It’s the place to go for dressy frocks, blouses and skirts at a reasonable price point for the average young lady. It’s atmosphere is classy and upscale without being intimidating. In short, it’s struck the perfect chord in Halifax’s youthful shopping scene.

The reason for this may come down to one simple fact: owner Johanna Galipeau was 19 years old when she opened it. Safe to say, she knew the market.

When most girls would be in their second year of university, trying to decide what they want their major to be, or whether they’d like to move out of residence next year, Galipeau had already made the decision that she would leave school to pursue her dream of owning a successful boutique.

That dream became a reality, and then some. Not only was Sweet Pea a success, but Galipeau now owns two other trendy shops: Twisted Muse and Sparrow Shoes, both located in the Mills shopping centre on Spring Garden Road.

How did she make this decision? And wasn’t she even just a little bit afraid?

“Sometimes I do think ‘Why was I so ballsy?’” Galipeau laughs. “But I think that’s part of getting in to business. You can’t second-guess yourself. You have to be a little naïve just to get yourself out there.”

With the backing of her parents, both of whom had past experience in business ventures, Galipeau launched the shop in 2007, immediately after leaving her arts program at Saint Mary’s University.

“The opportunity came with the space,” Galipeau says in regard to the shop’s prime real estate at 1542 Queen St., a well-known boutique area.

From there, she filled it with a wide array of well-designed “girly” clothes from brands such as B.B. Dakota, Peel, Grab, Lovely Girl and House of Spy.

Although the boutique’s success speaks for itself, Galipeau dealt with her fair share of obstacles in the beginning.

“It was hard at first. Because I was so young, people wouldn’t take me as seriously,” says Galipeau. “I knew I just had to hang in there. I just had to earn my way in.”

And earn it she did. In July 2010, Galipeau opened Twisted Muse, which features a more casual, urban look, and in December of that year, she launched Sparrow Shoes. Galipeau is now a serious player in the Halifax retail industry.

“I grew up here,” Galipeau sums up, looking proudly at her shop.

To celebrate the store that made it all happen, and that continues to make it happen for all young fashionistas searching for a darling dress, the Gazette and Sweet Pea have decided to partner up and offer the ‘I heart Sweet Pea’ contest.

Simply visit Sweet Pea’s Facebook page, “like’ the page, and post which brand at Sweet Pea is your favourite, along with your Dalhousie email address. You’ll be entered to win a $25 Sweet Pea gift card, and the opportunity to be featured in an upcoming Gazette fashion feature.