A city connected through appreciating art

For an eighth consecutive year, the Nocturne art festival astounded those who explored downtown Halifax and Dartmouth. While the festival draws people out, artists and attendees are also noticing how art is drawing people together.

Several projects on Saturday night were centered around the theme of connecting people inhabiting a single city, and their collective experiences.

At the Halifax Central Library there were multiple art installations on display. Outside, passerby’s attention was captured by landscapes of marshes contrasted with suburbia. Projected 20 feet up on the side of the reflective building, this was part of the Backlands, Badlands and Burbs project by Susan Tooke.

Under that were several white painted boxes on the ground, where participants lined up for a chance to lie inside, watch and listen with headphones.

Inside the library, a project called Are We Really Strangers? attempted to create what they called a “real-time social network”. One of the collaborators, Damian Lidgard, says the hope of the project is to show that we’re part of a larger community.

“In Halifax people always say there’s 6 degrees of separation, it seems that everybody knows everybody,” said Lidgard. “Our hope is to be able to show that.”

With a collage of photos projected on the screen, users could take turns selecting faces they recognize. Lidgard and his colleagues, including Derrick Riley at Dalhousie’s Computer Science department, and a team of about seven exchange students, have been working on details of the idea since April.

“You can be standing next to a stranger and have your photo taken, but when you go into the network and start to make connections, people you know might know the person next to you,” says Lidgard.

This is Lidgard’s fifth year as a Nocturne collaborator. He says he thinks the event is important for art and the community.

“Having time for people to be creative creates a lot of good energy; people meet people they don’t know,” he says.

“Everybody comes out to the city and out at night and interacting with other people and the various projects, I think it’s a great idea.”

Inside the library’s Paul O’Regan Hall, the Dalhousie Fountain School of Performing Arts gave a moving performance on Halifax’s history, entitled Echoes, every 45 minutes. Near the staircases, headphones sat on a table, playing Becka Barker’s How To Say piece.

This installation recorded pronunciations of phrases, one person trying to mimic the other precisely. From when Nocturne began at 6 p.m., the first floor of the library was filled with curious families, students and couples taking in the art and music.

Heather, a Halifax resident attending Nocturne for her first time, said the energy in the evening is like a buzzing.

In line to participate in Are We Really Strangers?, she said, ”It shows how you can build such a great social network and not even know it, not even know that you know so many people in one place. It’s sharing a common interest especially when it comes to appreciating art and history, just the connections that people have in general.” 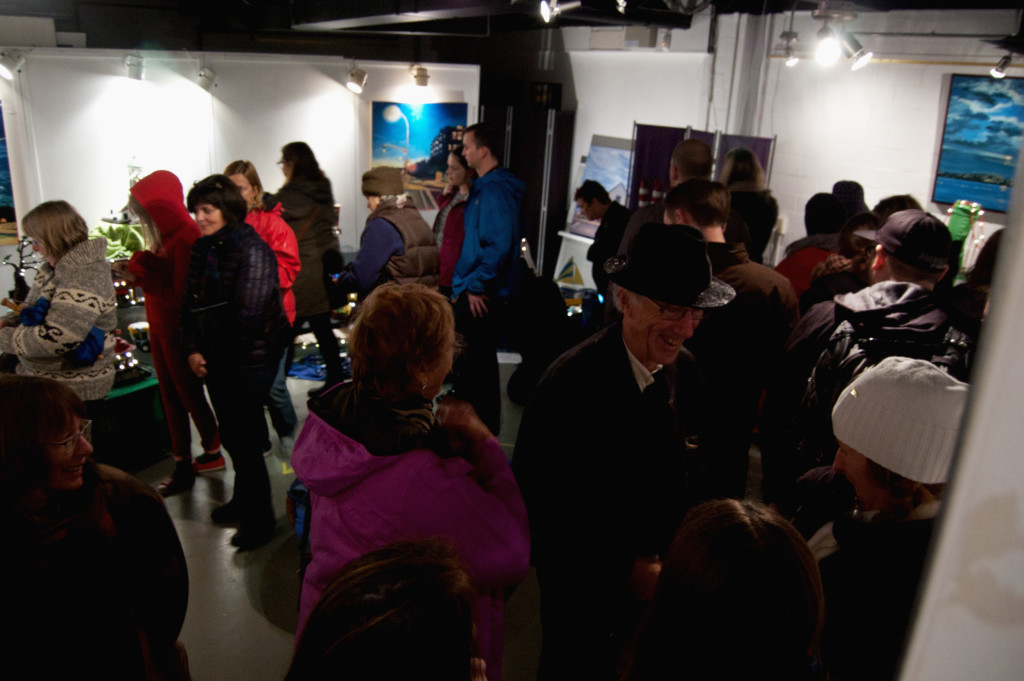 Other participants were surprised by parts of Nocturne.

“I think what’s really interesting is when you’re reading the material that guides you to make a choice and then you go to see what it is, it’s different from what you imagined,” says Margaret Perry.

Perry was at the library events with her daughters Laurel and Charlie, who are in high school and attended Nocturne for the first time last year. After enjoying it, they invited their friend Paige English.

“I had no idea what it was but it sounded cool. I like the interactive the best I think, or at least being able to talk to the people that made the art and stuff like that,” said English.

Although rain put a slight damper on the Nocturne events, it’s clear that Halifax residents still came out in swarms to take in the various sights and sounds.

“I enjoy seeing the shared values in art. A lot of times these days people say they like art, but they don’t really go out there to see it, explore it. Whereas here, you can see that people really do care about it, and go out of their way to make time for art,” says Charlie.