Briefs of the week

On Wednesday, Oct. 10, Dalhousie University officially unveiled its IDEA Project – a renewal of the Sexton campus. Announced in September 2016, the $64-million project received $32 million from the Government of Canada.

The Sexton campus schools students of Engineering and is also home to Atlantic Canada’s only school of Architecture.

The Student Union of Nova Scotia College of Art and Design (SUNSCAD) is boycotting Art Bar + Projects “due to the Art Bar’s continuing inaction against sexualized violence.”

In a letter addressed to students and community members, SUNSCAD stated that Art Bar management “took no steps to address the issue” when the alleged misconduct of a former manager came into public conversation over the summer.  “The manager was allowed to finish his contract without repercussion. It is unacceptable that no investigation or consultation with survivors occurred,” read the statement.

“We are demanding that all organizations and individuals managing the Art Bar + Projects create a committee to develop a sexualized violence policy that will affect all events, patrons and employee involved with the Art Bar + Projects. The committee must include adequate representation of students, survivors and survivor advocates.”

The statement was posted on SUNSCAD’s Instagram story on Oct. 13. Read it in full below. 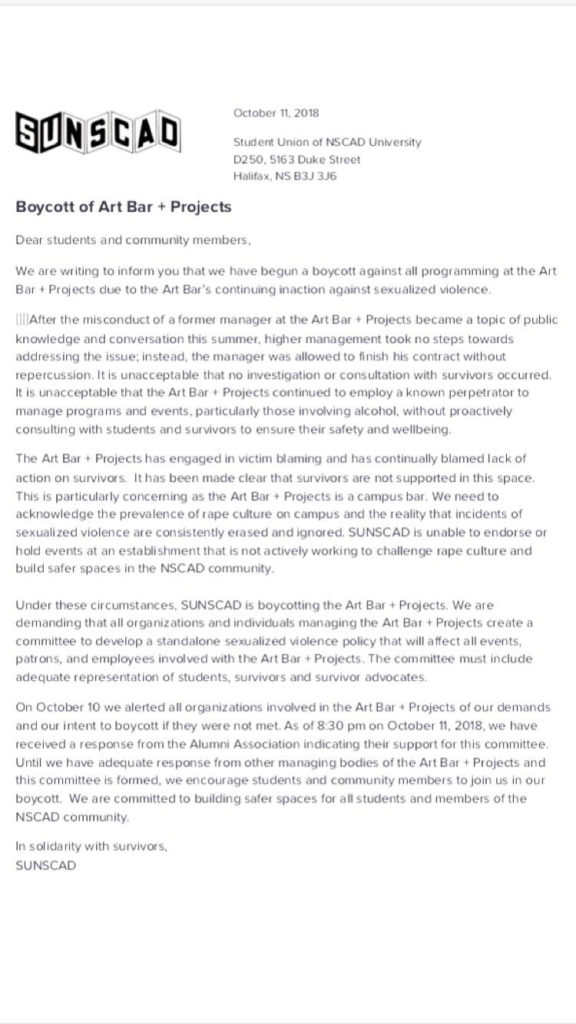 A St. Francis Xavier University student who was investigated for sexual assault has withdrawn from the school. On Oct. 8, an article from Brett Bundale of The Canadian Press told the story of a Toronto woman who left St. FX after “it quietly set aside its decision to suspend” the fellow student who allegedly assaulted her, despite a university panel finding him responsible.

This was because he’d filed an appeal – but no one communicated that to the victim. On Oct. 12, CanPress reported that the alleged rapist has now withdrawn and the university’s president has apologized for St. FX’s handling of the incident.

“In this particular case, there were clear gaps in communication and apparent issues relating to our appeal processes that negatively affected our university community and, in some cases, retraumatized victim/survivors,” President Kent MacDonald said in a statement. 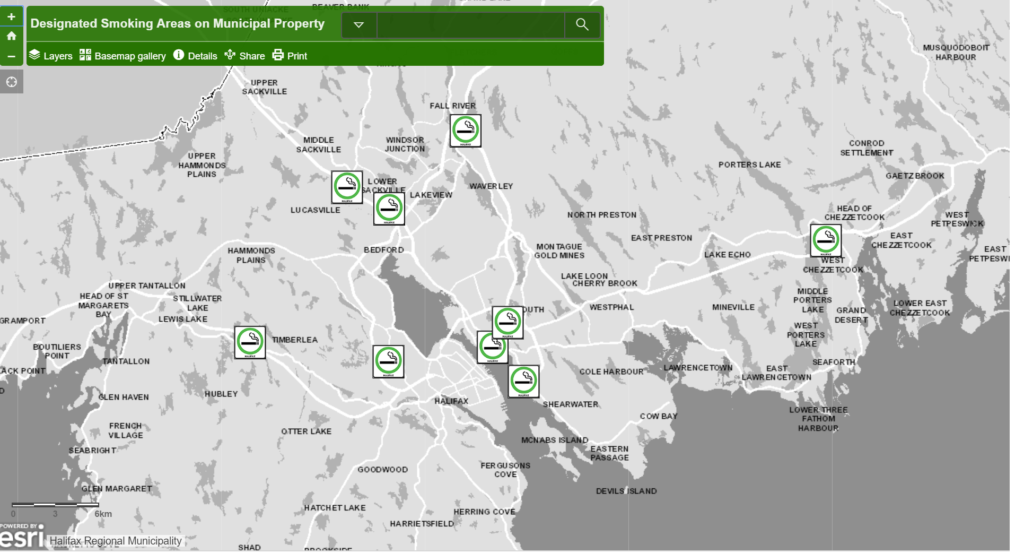 For those looking to (legally) light up in HRM, there are slim pickings. As part of the amendments to the municipality’s respecting nuisances bylaw, smoking will be prohibited on municipal property starting on Oct. 15. As of the afternoon of Oct. 14, a mere nine designated smoking areas are indicated on the online map. Many of the areas are at Halifax Transit terminals, with none on the peninsula so far.

MSVU calls for the return of Halifax Transit Route 18

The Mount Saint Vincent University Students’ Union is demanding the return of Route 18 to Halifax Transit. When service changes went into effect on Aug. 20, Route 18: “Universities” was one of the multiple transit routes on the chopping block. One of its stops was right in front of MSVU.

Now that it’s gone, the Students’ Union has issued a press release stating that the change “disproportionately impacted Mount Saint Vincent University students’, faculty, staff and the outside community.” According to the release, the call for the route’s return has gained more than 875 supporters in just a few days.

The Supreme Court has ruled that the federal government is not obligated to consult with Indigenous peoples before drafting laws.

The Mikisew Cree First Nation in Alberta had argued that “consultation efforts should be made before any bill that could affect their rights is introduced in Parliament,” while “Ottawa argued that approach would threaten parliamentary supremacy and undermine the role of Parliament — and the separation of legislative, executive and judicial powers — by subjecting laws that have not yet passed to judicial review,” as reported by CBC.

A 7-2 decision ruled in Ottawa’s favour. However, “the court found there is still an obligation on the government to act honourably and maintain the ‘honour of the Crown’ when drafting legislation that could affect Indigenous people.” Whatever that means!