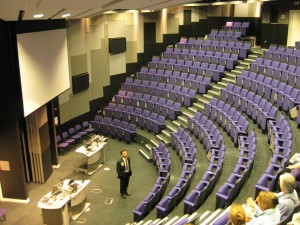 Restructuring is going to have to happen to Dalhousie’s pension plan, says financial writer Bill Tufts. He says dramatic changes need to be made in order for the university to remain sustainable.

According to Tufts, back in 2008 “these pension plans got whacked very hard due to negative returns in the stock market.” Tufts says a long-term downturn in markets have created a bad situation. “Where they got caught off-guard is that the investments haven’t returned and 2011 is going to be a disaster for those same markets. That’s what we see in the third quarter reports out of Dalhousie—the disastrous results of 2011.”

Many pension plans are required to be solvent, meaning a fund needs to have the money to pay all of its obligations, namely any debt and the pensions of retired workers. The Dal pension plan was granted exemption from a solvency test until 2013, but Dal’s annual financial statement revealed the plan only has 60 per cent of what it would need to pass that test.

Ken Burt, VP of finance and administration, commented on the situation. “In 2013, if we don’t have an agreement with the employee groups and the economy hasn’t recovered, we’re going to be responsible for our solvency payments.”

In a Dal News release, Burt said, “If we are not moving towards a workable solution, we’ll have to begin to create a contingency fund to make those payments, and there will be a direct hit on the operation of the university on top of any changes in provincial government funding.”

Tufts warns that a shortfall in the pension plan translates into some unpalatable options for the university if things are left to the last minute. “It becomes very difficult to make changes at that point. Employees don’t want to contribute more money into [the pension plan], and they have these grandiose promises that you’re going to retire at age 55 with 70 per cent of your income for the rest of your life.”

The solutions as far as Tufts is concerned are few: “If you have a shortfall, someone has to pick that up. Currently there are only three options to fund that in the short term: you can cut back on services, you can raise taxes and tuition to cover it or you can borrow money to cover that shortfall.”

Tufts notes that this is not a Dal-specific problem. “Many schools are grappling with this problem; it’s on a global level. You can’t just kick the can down the road anymore. You have to deal with it.”