Dawgfather sets his sights on the DSU 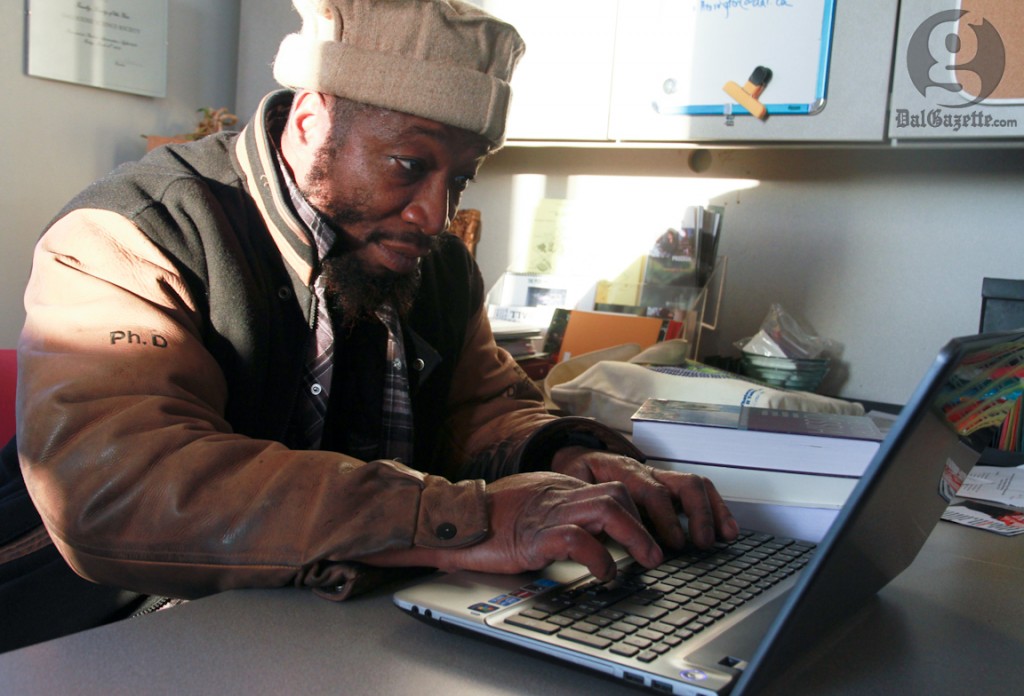 After an unsuccessful run for HRM council,  Dawgfather PHD is considering jumping back in the ring in this spring’s Dalhousie Student Union (DSU) elections.

While he’s refused to discuss the subject with the press, his Twitter account has been abuzz with his plans to run for Dal Student Union president and take “perpetual” control of the student union.

As Twitter tells it, the Dawgfather intends to put together a “Rainbow coalition” of “Chinese, Arab, White and African” students and, with a focus on voter registration, organize the “powerful political sleeping giant” at Dal. If he’s serious about his intentions, he’ll have to earn more than the 5.9 per cent of votes (357 in total) his one-man campaign garnered in the municipal election. But is he even eligible to run?

Katelynn Northam doesn’t see why not. She was responsible for overseeing the 2012 student elections as the DSU’s chief returning officer. According to the DSU constitution, says Northam, there isn’t anything preventing the Dawgfather from throwing his hat in the ring.

“There’s basically one rule,” says Northam. “You have to be either a full or a part-time student.” That gets you automatic membership in the student union, she explains.

While the Dawgfather hasn’t confirmed whether he’s a student yet, he has tweeted about his intention to enroll in a history of rock ‘n’ roll class. While no course by that exact name exists, MUSC 2019.03: The Rock’n’Roll Era and Beyond is a close fit.

Jacqueline Warwick teaches the course this spring and says there are no prerequisites to attend. The Dawgfather had better hurry—the class is already nearly 80 per cent full. But before he’s even eligible to register for a class, the Dawgfather has to be admitted to the university. Assuming he’s accepted and enrolls, then according to DSU bylaws the Dawgfather is off-leash and eligible to run.

Students have mixed views on the idea of the Dawgfather running for DSU.

Fahad Kabir is a first year sociology masters student. He feels the Dawgfather may have a misrepresented understanding of what the school needs.

“Just because you’re popular doesn’t mean you know what’s going on,” says Kabir. “You go around Dalhousie campus and everyone will know who the Dawgfather is,” he says. “That doesn’t necessarily make him a good candidate.”

“One hundred per cent I hope he’s elected,” says Tristan Temporeli, a second-year biology and neuroscience student. “He is more involved in most of these issues than anybody I’ve talked to on campus.”

But Matt Fitzgerald-Chamberlain has reservations about supporting the Dawgfather’s bid for the DSU. “I think anyone who wants to run … has to be committed to it and not just be doing it for their personal gain,” says the third-year computer science student. “If he’s just going for the (council position) where he could make the most hot dog sales, that might not be the best for everyone.”

According to former DSU president Chris Saulnier, it’s up to students to decide whom “they want to responsibly manage almost $3 million of their money and represent them to the outside world.”

Saulnier’s advice to students? That they start evaluating by reading the Dawgfather’s Twitter feed.