From the Archives: Political Visitors

Dalhousie has a history of hosting politicians

On September 28, the Dalhousie Student Union will be hosting an all-candidates debate on youth and student issues in the McInnes room on the second floor of the Student Union Building. You should definitely attend.

To salute the brave politicians who are about grace our campus, we’ve compiled an archives section chronicling some of the other political visits Dalhousie has hosted over the years. Based on past events, it’s hard to say what sort of welcome the debaters should expect — students’ reactions to our guests have ranged from a “deafening ovation” for soon to be Prime Minister R.B. Bennett in 1928, to the “snickering” of “erudite lawyer types” upon the arrival of feisty Newfoundland premier Joey Smallwood in 1963. 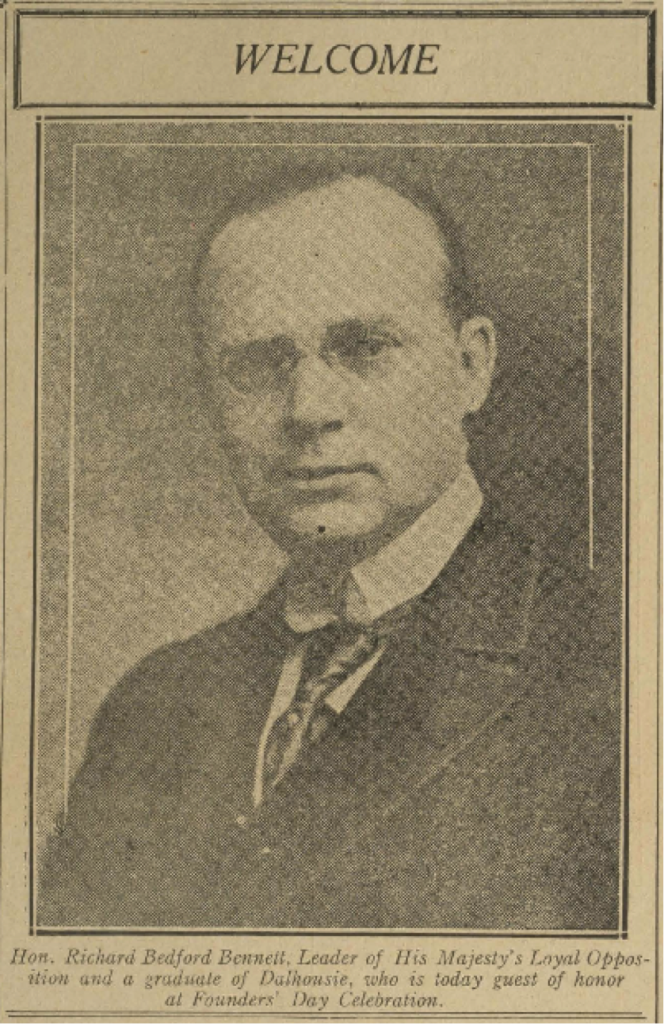 Dalhousie’s first Founders’ Day Celebration, held a week ago today, was, without doubt, an unqualified success. We were especially fortunate in having with us our most distinguished graduate Hon. R. B. Bennett, leader of His Majesty’s Loyal Opposition.

The ceremony took place in the Gymnasium where every available inch of space was used to accommodate those present. Long before the beginning of the program the hall began to fill rapidly and when the time came to start hardly a seat was left in the building.

The program proper did not commence until eight o’clock but from half past seven, a half-hour was devoted to group singing of the college songs, led by the Choral Society and accompanied by the Dalhousie Symphony Orchestra under the direction of Sina S. Singer.

On the platform were, the Governors of the University, the Faculty, and members of the Students’ Council, in their academic robes, the Premier of Nova Scotia, members of the cabinet, the Mayor of Halifax, members of the Supreme Court, representatives of sister universities, and various other friends of Dalhousie. As the academic party and friends proceeded to the platform the orchestra played the War March of the Priests from Athalia, and, when Mr. Bennett himself appeared the students rose to their feet and made the gym ring with a Dal yell.

Mr. G. Fred Pearson, Chairman of the Board of Governors, acted as chairman for the evening and first called Dr. Strachan of Edinburgh to open the ceremony with prayer. Next the orchestra played a selection from Tannhauser after which the entire assembly sang Glory for Dalhousie.

Mr. Pearson then made a few introductory remarks. He thanked the board for selecting him as their chair- man and made a touching reference to his predecessor, the late Mr. George S. Campbell. Mr. Pearson then went on to speak of Mr. Bennett. The Conservative party deserved the greatest credit, said Mr. Pearson, in choosing Mr. Bennett as their leader. (Cheers).

He is a distinguished lawyer and a distinguished Dalhousian. He has shown in the past that of all his many interests, Dalhousie is one of the nearest and dearest to him.

Next, J. Gerald Godsoe, President of the Students’ Council presented Mr. Bennett, on behalf of the student body with an illuminated address.

Mr. Justice Russell, who had been one of Mr. Bennett’s professors at the Law School, was given the honor of introducing the speaker. With his characteristic wit he welcomed Mr. Bennett and assured him that all Dalhousie, no matter what their politics, would wish him the greatest success in his political career. Mr. Justice Russell was vigorously applauded by the students who stamped and cheered enthusiastically.
Mr. Bennett then rose, and after a deafening ovation, delivered the finest speech that has been heard in the gymnasium for years.

Mr. Bennett brought down the house with his address and the crowd applauded even more vigourously than they had done when he started. Dean Llwyd of All Saints Cathedral then pronounced the benediction after which the assembly sang the National Anthem.

This closed the program proper, but many stayed to listen to the final selection of the orchestra and to meet Mr. Bennett. 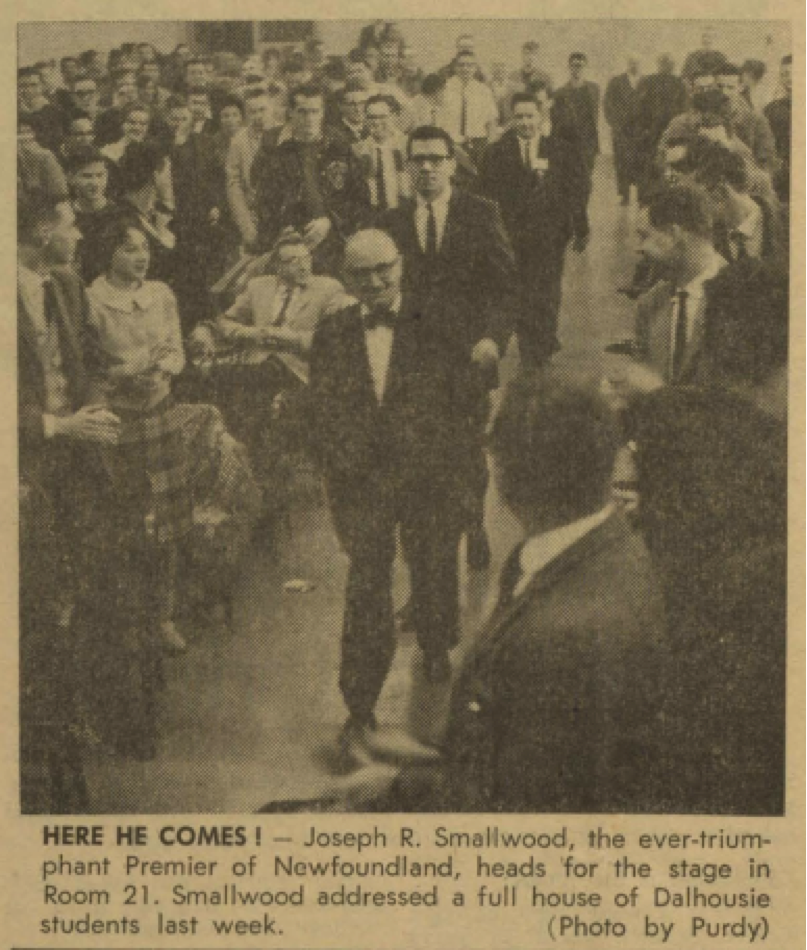 “I have a non-ending appetite to stay in power,” confided Newfoundland’s Joey Smallwood with characteristic modesty.

Arriving a half-hour late to address a packed mob in Room 21 last week, the fiery premier entered to the strains of a “We want Cashin” chant, organized by some of the more erudite lawyer types snickering bravely in the front row. Smallwood promptly responded with an aimable discourse on his perennial enemies on the Newfoundland political scene. Commenting on Richard Cashin, who turned Liberal after graduating in Law from Dalhousie two years ago, Joey stated: “He is an exciting fellow. He is the most decent, the most civilized man, that I have met; yet tough and realistic without being cynical. And yet, he is as idealistic as a baby.”

Smallwood felt that the latest Cashin differed from his progenitors only in that he had picked up an education. From this he generalized that one of the most important functions of the universities is to bring forth the radical and rebellious elements in human nature. “If at the age of twenty five or thirty you aren’t a radical, a flaming revolutionary, God what a stinking Tory you will be at fifty!” exclaimed Smallwood. 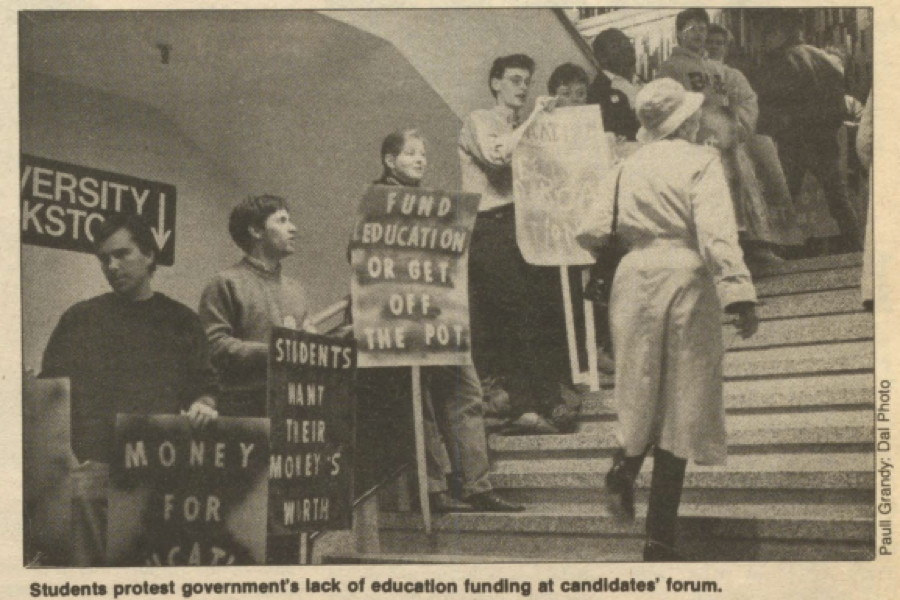 Verses were chanted, slogans yelled and placards displayed by a large group of concerned students last Thursday night at the all-candidates meeting held at Dalhousie. The students were there as part of a student union sponsored protest to demand action of the candidates present to bring the strike to a quick end. “Legislate to educate” often echoed this concern in the hall.

The Dalhousie Faculty Association’s strike was not directly addressed during the meeting’s question period, but it was given sympathetic attention in all the candidates’ opening statements.

“Still bubbling, Stew!” was one sardonic interruption from the audience as McInnes gave a short review of his past accomplishments, including the Halifax harbourfront clean-up project of which he said he was “quite proud.”

Hecklers were out in full force, directing themselves each time to McInnes as various issues were addressed, including Canada’s role in NATO, in international development and in research and development spending.

Wage parity was high on the agenda of a group of dockworkers who attended the meeting. With three separate questions they attempted to have McInnes explain why after he had promised change, east coast workers were still earning $3 .36 less per hour than their west coast counterparts.

McInnes replied that the wage gap “would be narrowed by one third, ” a response which brought cries of “liar!” from the workers.

By now frustrated by the constant heckling, the moderator, DSU Treasurer Frank DeMont yelled back, “If you think he’s a liar, you don’t have to vote for him, but let him speak!”

When asked about their parties’ future relationship with US President-elect George Bush, McInnes replied the Conservatives “don’t have to kowtow, but we have to recognize the reality of the USA as a big power.” NDP candidate Larkin took the opportunity to voice the first Free Trade opinion of the evening with “yes, let’s face reality, but let’s get out of the free trade deal while we can.” Liberal candidate Clancy stated that Canadians have to face Americans as independents, “from the other side of the fence.”

All candidates were sympathetic in their responses when asked what improvements their Parties would make to the Canada Student Loan Program. Clancy and Larkin were “committed to an overhaul of the system,” while McInnes told the audience to “look to considerable relief from our party program.”

Miguel Figueroa expressed a more detailed solution to the problem, stating that “(Communists) would get rid of the loans system, and implement an all-grant program.”