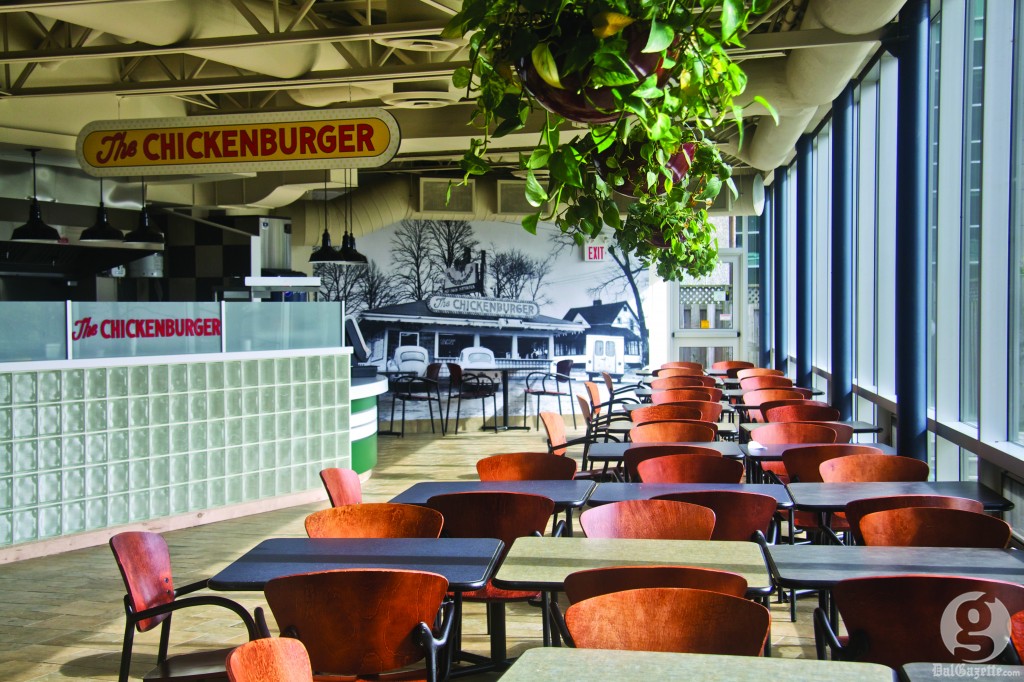 Students have a range of new food options at Dal this week. (Adele Van Wyk photo)

Food services at Dalhousie have been a hot topic in recent years, and the end of a four-year contract with Sodexo in the Student Union Building (SUB) prompted a change by the student union to find a new food service provider this year.

So, say good-bye to Booster Juice and hello to Chickenburger.

The Dal Student Union (DSU) made the change for an important reason: control. With the Sodexo contract coming to an end, the union was faced with several options.

They could renew the contract, continue with the services provided, and leave the power with Sodexo. They could find another company to operate in the building independently, again leaving the power to the contractor. Or, they could find a company that reports to the union rather than working beside them, and that’s what DSU president Jamie Arron says Chartwells is doing.

“They came forward with an incredible proposal,” says Arron.

“They understood what we were looking for in the sense that they proposed a management fee, which is a fundamentally different type of arrangement than what we’ve had in the past.”

Groups like Campus Action on Food (CAF) and the Loaded Ladle have brought food services on campus under scrutiny in recent years, demanding the establishment reconsider what it is offering the student body in terms of services and accountability.

CAF has even gone as far as publicly calling out the union on their website, which reads: “Food contracts at Dalhousie serve commercial interests at the expense of students. Students are presented with expensive, unhealthy, and often unethically sourced food, and are prevented from creating or seeking out alternatives.”

CAF existed before food was a major issue at Dal, a group of 12 students who were unhappy with the food services on campus. To bring these issues to light, they hosted guerilla feedings. They cooked the food elsewhere and set up in the SUB until security took them down.

Security was necessary because Sodexo had it in their contract that no food but their own could be served on campus. This was their exclusivity contract.

John Hutton, a fourth-year student on the DSU food taskforce and NSPIRG board member, remembers the beginning of the food services struggle.

“Four years ago food was not the big issue on campus,” says Hutton.

“It became an issue that the student union felt they had to switch over because students raised the issue through organizations like CAF and the Loaded Ladle and even the King’s Food Co-Op.”

Shelley Strang-Tobin, food services director for Chartwells, says that the exclusivity contract is still in place but excludes student-run groups and societies, who will be able to provide their own food.

Another recent change was a move to increase inclusion of the Loaded Ladle, which now has a permanent SUB residence in room 314.

“We’re providing them with the space with the intention that they continue to ramp up their operations, ” says Arron.

“We’re not giving them that space for their existing needs, but because we see them as a critical part of the long term future.”

The Loaded Ladle is excited for the space and the opportunities it will bring but, like the DSU, looks forward to what opportunities could exist in the future.

“I would really like to see a space that is the Ladle’s space, something that we have autonomy over,” says Ciarra Glass, current board member of the Loaded Ladle.

“Something that our group can use and decide how to use ourselves, like being able to share our space with other student groups,” she says.

Arron says Chartwells was selected for a host of different reasons.

“Chartwells understood the importance to us of localness, variety, of catering to international students, of sustainability,” continues Arron.

“They understood how food is about more than just putting cereal in bowls, it’s an opportunity to build and create something.”

While Chartwells is similar to Sodexo in that both are large food service providers, Strang-Tobin says Chartwells wants to differentiate itself from the get-go.

“Menu planning, involving the students, not only at the executive level but as well as the student body, to help develop menus; figure out what people want to see and what they’d be interested in buying. We have a lot to bring to the table,” she says.

Chartwells will be working with the sustainability office’s campus garden, just outside the SUB, in growing the foods that students will be eating. They’ve had success in the past with growing the foods locally before at what was then the Nova Scotia Agricultural College in Truro.

And of course, while some things change, others stay the same.

“I’ll still be here six days a week,” says the Dawgfather from his van outside the SUB.