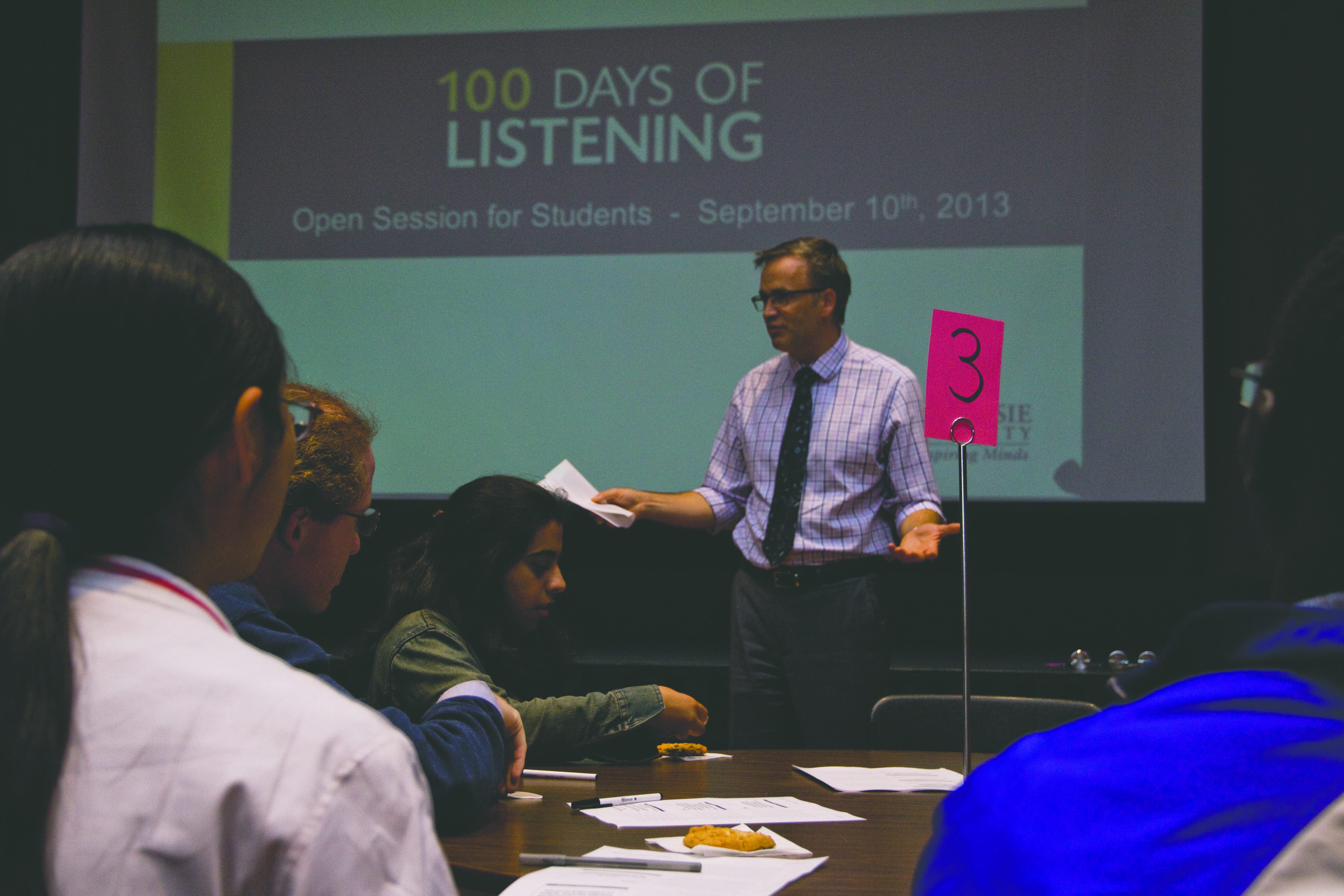 Dr. Richard Florizone speaks to those few in attendance (photo by Bryn Karcha)

Fifteen or so students and some administrators sat awkwardly in half of the McInnes Room in the Student Union Building for one of the 100 Days of Listening sessions.

“It’s understandable that in the first week students have lots of other things to do,” laughs Dr. Richard Florizone, Dalhousie’s new president, “but it was nice to see a few of them come out and really engage in the topic.”

100 Days of Listening is the president’s way of gauging the needs and interests of the people who make up the university.

The event was advertised on campus but had a small turnout. A large portion of the group was cajoled in by Florizone when attendance was noticeably non-existent, and had to leave early, although that didn’t deter the conversation. The topics varied from tuition, class size, to how international students feel at Dal.

At least a third of the room identified themselves in their questions to the president as international students.

One girl praised the international center and said it made great efforts to make everyone feel at home. Another said she knew other students who changed schools for financial reasons.

Alia Karim, a second-year student, says that she finds financial aid at Dalhousie—through scholarships, grants, and bursaries—to be too little and too narrowly awarded.

She struggles to pay for a cellphone and nice clothes but says she needs them to be professional.

“The future is really bleak.”

Hidaya Ahmad spoke up about how professors and TAs were more accessible when she started her undergraduate degree but as she got further in, they got further away. They became too busy and she didn’t feel the same sense of support from staff and administration towards the end of her degree as she should.

Online submissions have been more successful, the campaign receiving 400 submissions at last count, since it began July 2. Florizone did say, however, that he hopes more people come out for the next two 100 Days events open to students.

“The big picture for me, of all of this, is that we’re talking about ‘where will we go in the future with Dal’ because we’re building on success,” says Florizone.

“That’s not to say that we don’t have challenges but whether it’s the scores of student engagement, which is above the national average, or the growth of research or enrollment, we really are building on success.”

The in-person consultations have only just begun, starting with individual meetings with government officials and administration, then going to smaller group meetings, including this past August DSU council meeting.

Florizone has been recording his experiences on a blog, which can be found at 100daysoflistening.tumblr.com.