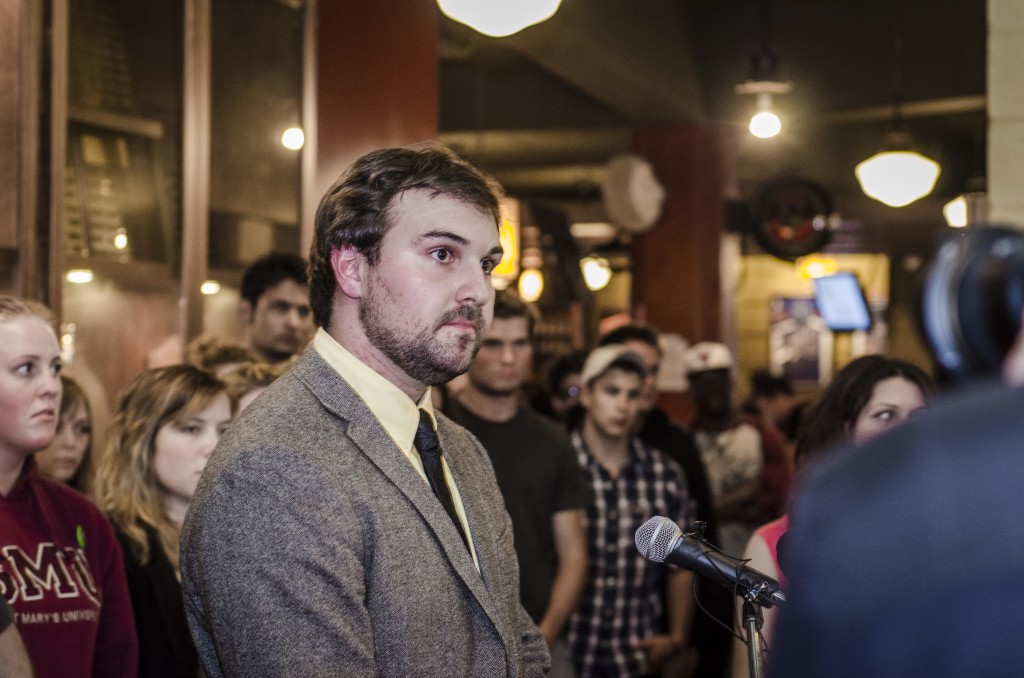 SMUSA president Jared Perry addresses the press on September 5 before stepping down the next day. He participated in the chant. (Calum Agnew photo)

The 110-page document, “Promoting a Culture of Safety, Respect and Consent at Saint Mary’s University and Beyond,” was made in response to an orientation week event in September where freshmen were led by frosh leaders in a chant with the theme of underage rape.

The executive summary of the report includes 20 recommendations on how SMU could handle issues of sexual violence, inclusivity and safety on campus.

One of the recommendations suggests SMU should “establish clear standards of behavioural norms that would apply to all members of the university community.”

The report shows student leaders at SMU identified 23 “sources of sexualization/sexism during O-Week,” including “society and cultures.”

One response suggested to “repair the harms caused by the O-week practices” is to “come up with new (clean) chants about DAL.”

“The University thanks the President’s Council for its important work and commits to implementing all of the recommendations in a timely manner,” said Dodds in a media release on Dec. 19. “This will not be easy, but it’s necessary and so we have already begun to work on implementing many of them.”

The same day, a commenter on SMU’s official Facebook page said that if the report is “as well thought out as your smoking and e-cigarette policy,” it “will be another complete failure and hardly worth the paper it’s printed on.”

In reply, SMU’s Facebook account said “the council’s report is substantial and includes a broad range of recommendations based in best practices found at other institutions and from the direct experiences of some of the council’s members.”

“The University will be judged by our timely actions and not on the independent council’s words alone,” said SMU.