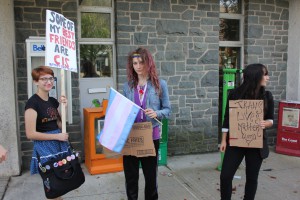 Participants in the rally for transgender rights hold signs in front of Dal’s Student Union Building. (Photo by Natasha MacDonald-Dupuis)

Transgender students and their allies held a visibility rally outside Dalhousie’s Student Union Building on Monday for the second consecutive year.

Participants held signs and transgender flags in efforts to raise awareness for transgender rights and demand better and safer trans resources on campus.

The three-hour-long demonstration was organised by trans student Jessica Dempsey, who is awaiting a ruling from the Nova Scotia Human Rights Commission after filing a complaint last year against Aramark, Dal’s food services supplier.

Dempsey also filed a human rights complaint against Dalhousie, alleging professors refused to call her by her preferred name and repeatedly outed her in class.

The former management student says that some improvements have been made in the last year to improve transgender rights on campus, but progress is slow.

“This morning, my preferred name was put on my medical file at Dal Dental. That’s huge. They’re the first to have done that. Now why can’t the university do the same?” says Dempsey.

Approximately 25 people attended the rally, with participants coming and going as the event progressed.

A trans participant, who wishes to remain anonymous for security reasons, was not content with the modest attendance.

“Today could have had a better turnout. I feel like there’s an issue with trans allies. I don’t think cis allies are there for trans people on campus … they don’t actually show up or talk about the issues,” says the participant.

According to a study published in the Journal of Gay & Lesbian Issues in Education, transgender and gender non-conforming students are one of the most underserved populations on college campuses.