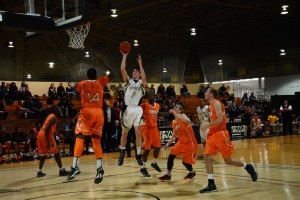 The Scotiabank Centre will play host to the Atlantic University Sport (AUS) basketball championships for the first time since its recent rebrand.

Though the stadium is the same, the tournament structure is revamped. This time, we get to see both the men’s and women’s teams compete under the same roof.

For the Tigers, the expectations are, as always, high. The women Tigers enter as one of the favourites to make it all the way to the championships, while the men have proven they can defeat the best in the league.

The second-ranked Dalhousie women’s team enters the tournament with a first-round bye, where they will face the winner of Thursday’s matchup between the UPEI Panthers and the UNB Varsity Reds. The Tigers have fared well against the Panthers, going 3-1 against the team on the season, and have beaten them by 10 or more points on two different occasions. In the one game the Tigers had against the V-Reds, the Tigers stormed their way to a 68-56 victory.

But no team in this division should be ruled out. A tight race among the league’s best four teams, including the Saint Mary’s Huskies, UPEI, and Memorial, resulted in a critical weekend that had major implications on team’s final placements. The Tigers were fortunate enough to capitalize on the opportunity against the Cape Breton Capers, a team they’ve already had previous success against. The two wins to cap off their season against CBU landed them second in the standings and the pivotal first-round bye. Now, only four points separates the top four teams.

The Tigers should consider it a disappointment if they don’t at least make it to the finals. If Dal’s Courtney Thompson, who is leading the league in points per game with an astounding 23.9, can continue playing at the pace she has all season, it’ll be hard for any team to get past the Tigers.

The men’s side should see some tight, nail-biting games in the first round. There’s no reason why the Tigers shouldn’t walk away with a victory over the CBU Capers. The Tigers have proven time and time again that, when they want to, they can be one of the best teams in the league. Jumping out to a 5-1 start to their season by the holiday break with one of the youngest, inexperienced teams in the AUS was a strong indication of that. The team slid in January, however, going a dismal 2-6 to start 2015 and slowly sliding down the rankings. From there, it’s a been a battle for the Tigers to regroup and find the early spark they had in November. Ritchie Kanza Mata, Kashrell Lawrence and Jarred Reid will all need to have the tournament of their AUS careers in order to take home the title.

Look for the Memorial Seahawks to play the role of spoiler. The Seahawks were with out Vasilije Curcic for the first eight games of the season, where they went a dismal 2-6. Following his return, the Seahawks went on a three-game winning streak, beating tops teams such as CBU, UPEI, and the Tigers. Their 6-14 record shouldn’t be an indication of the type of team they have developed into today. Though it doesn’t look like they’re going to make it to the finals, they definitely could make an impact on the quarterfinal matchups, and possibly give the team they face in the semifinal a run for their money.