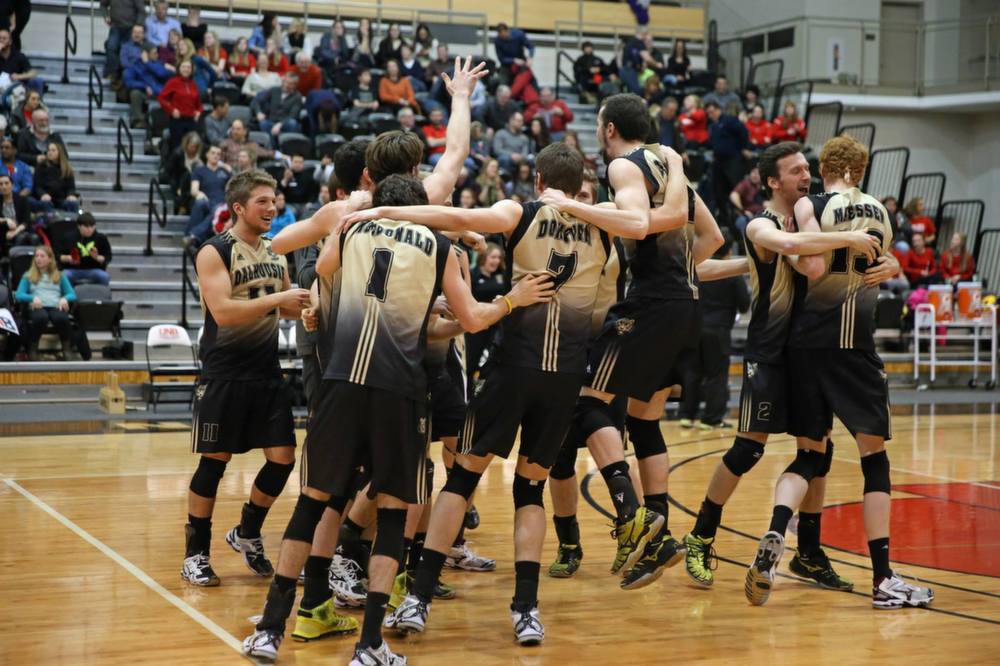 Jonathan MacDonald (1) and Matthew Donovan (7) join their Tigers teammates in celebrating an improbable win. (Photo by Fran Harris via the University of New Brunswick)

The Atlantic University Sport (AUS) men’s volleyball crown is returning to Halifax, as the Dalhousie Tigers retook the title from long-time rival University of New Brunswick on Feb. 15.

The Tigers secured the AUS championship by winning 2-0 in a best-of-three series, and scored a spot in the Canada Interuniversity Sport (CIS) national championship tournament. The CIS championship will be hosted by the University of Calgary from Feb. 27 to March 1.

The fourth-seeded Tigers play fifth-place Laval in the quarterfinals on Feb. 27.

After Dal took game one of the series at home, the team travelled to Fredericton with a chance to clinch the title. The game began in UNB’s favour, as the Varsity Reds took the first two sets 25-22 and 25-20.

“We started playing better after being 2-0 down and the third game was really close,” says Ota. “Both teams had chances to win the game, and fortunately we were able to pull it out at the very end.”

It was not until the third set that Dalhousie secured their first set of the night at 25-21. In a tight battle to the finish, the Tigers took the fourth and fifth sets to claim their 35th AUS title.

“It was important for us to stay calm even though the situation was pretty crazy and I am really proud of how are guys were able to hold it together there,” says Ota.

The player of the game went to Dal’s Alex Dempsey, who secured a team-high 15 kills in the game. Connor Maessen led the squad in blocks with 11, and Adam Sanderson recorded 20 digs.

“He has become a better player and a leader of the team as well,” Ota says of Dempsey. “If it was not for him or the others stepping up their games we would not be in this position.”

Ota, who was named the AUS coach of the year, had two weeks to prepare the team for a return to the national stage, but for now is proud of his team’s result in the AUS final.

“It was definitely one of the more dramatic games we have had in my 15 years at Dalhousie, I don’t think we’ve ever come back from a 2-0 deficit like that in a match to win,” he says.

“But [for nationals] I think we’re trying to prepare as if it were any game.”