For the fourth time in a row the Dalhousie Field Hockey team are champions.

“This team is the most impressive team I have ever coached,” says the team’s Head Coach Linda Bonin. “We had an impressive coaching staff again this year and the girls themselves, just the intensity they put in their game is very high quality.” 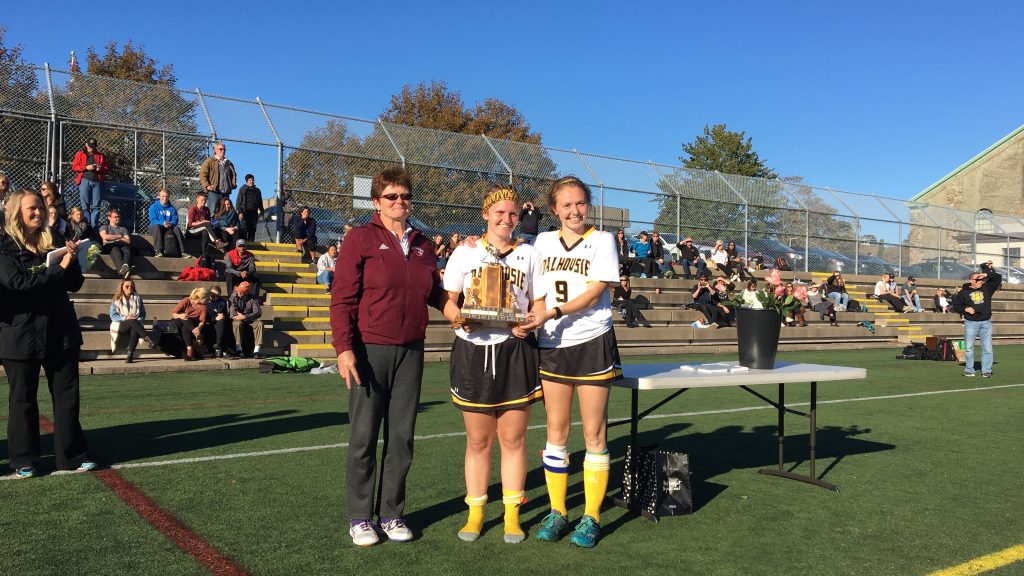 This was a rematch of last year’s championship game where Dal won 3-2 in a shootout against the Panthers. There was a lot on the line for the Tigers in this game, with a win they would end their season by going undefeated.

The Tigers came out strong in the first half. They forced the play in UPEI’s end of the field for most of the first half, and had a number of good scoring chances. Dal’s most dangerous chance came when Maya Palacio deflected a shot on net but Panther’s goalkeeper, Jaclyn MacKinnon, was great stopping every shot that was fired her way.

“It was frustrating but I think we saw that coming so we knew we had to stay calm, just stay patient and it will come,” said graduating player Samantha Spooner, on the Tigers inability to score in the first half.

The Tigers didn’t give up. In the second half Dal player Maureen Parker spun around a defender, took a few steps to get close to the net, and fired the ball past MacKinnon to make the score 1-0.

The Tigers didn’t let up, they continued to pressure the Panther’s and UPEI couldn’t create many good scoring opportunities to tie the game.

As the clock hit zero the Tigers stormed out onto the field to celebrate their undefeated season.

“All I can say is I’m very proud of the girls on how they perform on the field, they do Dalhousie so proud,” said Bonin.

Before the championship trophy was handed out, players received individual awards.

Samantha Spooner says it “means a lot” to graduate on top. She explains the closeness and work ethic of the team is what makes the Tigers successful.

“We’re a family. We have always had some strong players come to Dal and we worked really hard,” said Spooner.

“Success we have basically comes from the athletes we get from across the country and outside of the country,” said Bonin. “They get here, they dig their heels in and they work hard. They are so coachable, they put into practice what we teach them and it leads to a positive outcome.”

Previously, the top two Atlantic teams would move on to the OUA conference in Ontario to play for a spot in the CIS (former name for U Sports) championship. However, that hasn’t happened since 2014.

“This team, they’re just amazing it is just so wonderful to coach them and the only thing I can say is it would be awesome to take this team outside the Atlantic to compete, they deserve that, they are at the next level.”