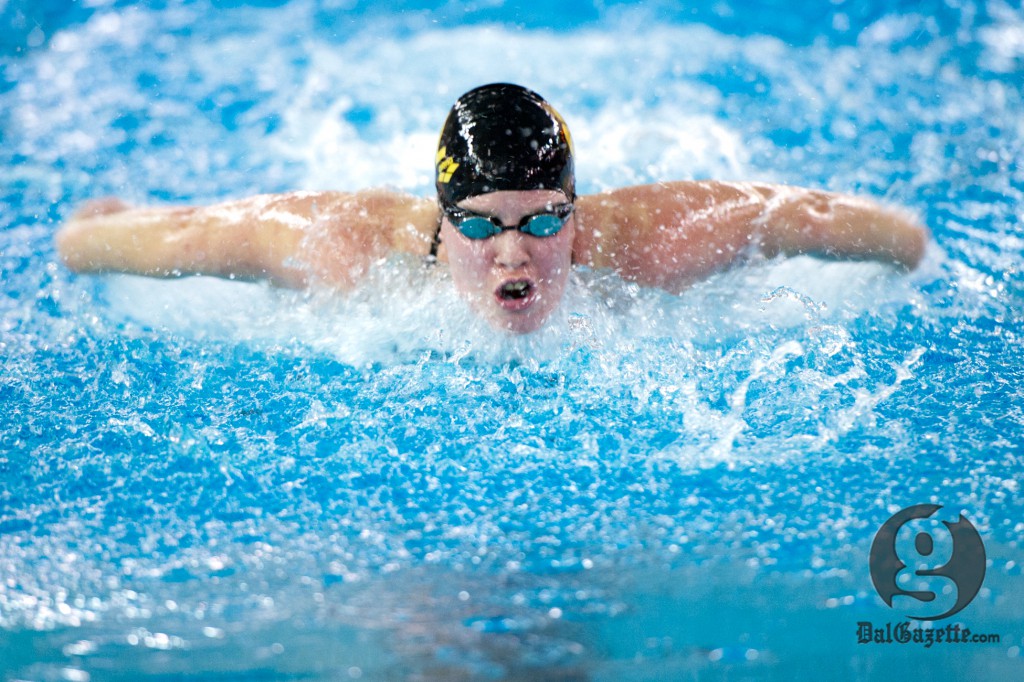 Rookie Meghan Toswell and Co. are hoping to keep their momentum into the next semester. (Chris Parent photo)

This was a semester of predictability. Our teams that we expected to dominate did so. Our teams that we figured would encounter some growing pains have experienced a rocky few months. If you are the Dal women’s soccer team, this predictability would be a good thing. There’s no such thing as getting tired of winning the conference banner. But if you are the women’s hockey team, you’re begging for an end to off-ice instability. Hopefully a permanent home residence in Truro starting in January will make all the difference.

A semester of few surprises won’t stop the Gazette‘s sports section from passing judgement on what was, at the end of the day, another thrilling few months of campus sport. We hope you enjoy our third ever ‘Semester in Review.’ – IF

If you didn’t know already, the women’s soccer team won back-to-back AUS championships—but that’s not all they did this year. They finished the regular season second overall with a 10-2-1 record, led the AUS with 31 goals, had an eight-game winning streak and won both of their pre-season games. When the women weren’t dominating on the field, they were dominating in the classroom. Eleven players were named CIS Academic All-Canadians. – KG

Dal swimming is off to a fantastic start with new head coach Lance Cansdale. The women’s team is strong and very deep and should once again sweep the AUS title—the question is how far will they make it at nationals. The men’s team likely won’t send as many swimmers as the women’s side to the year-end meet, but the men that will qualify are talented. Olympian David Sharpe has been a standout, swimming full time for the black and gold—he has already broken two AUS records. – PS

We at the Gazette are tough markers. One small blunder against Saint Mary’s at the beginning of the season knocked this team’s grade down from an A to an A-. But it is still a well-deserved grade as this year’s lacrosse team played far better as a whole than any other squad in Atlantic Canada, only losing once. – GB

In the yearly bout between Dal and St. Francis Xavier for cross-country supremacy, the Tigers were relegated to second place status this time around as Dal’s rivals swept the podium in both team competitions. Dal’s women, however, got the revenge they were looking for at nationals, finishing on top of their AUS opponents in eighth place. – IF 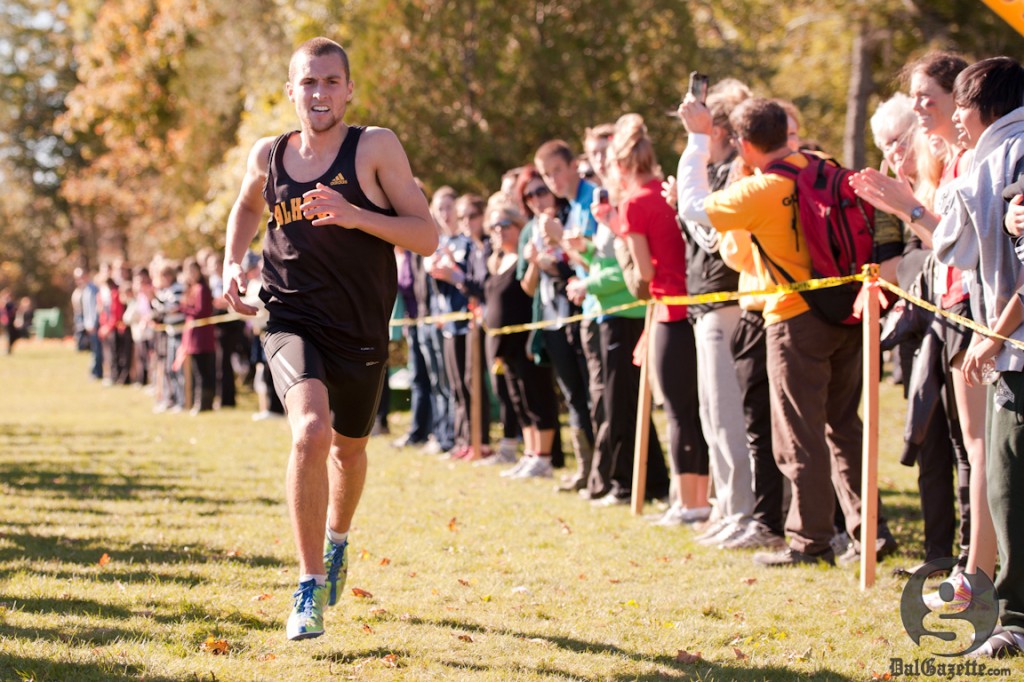 A program known for its blowout wins and sheer dominance in the Nova Scotia University Rugby League, it’s championship or bust for men’s rugby. So when the team fell in the finals for the first time in six years, it was a definite disappointment. Have no fear though, Tiger fans, this setback will serve as motivation for redemption next season. – AH

Handed a big boost when CIS sanctions were thrown at other programs, the Tigers looked to pick up momentum at the right time heading into the playoffs. Striker Tyler Lewars was finding the back of the net and the defence was standing tall, but the team fell short against a resilient UNB team in the semifinal. – HW

Critics would argue that this team has not performed to its full potential. Several blown leads at the hands of Acadia, Moncton and St. Francis Xavier brought back memories from a dismal 2011-12 campaign in which Dal suffered an 11-game losing streak. But with a 4-6-2 record and only a point out of the playoffs, this season has been a vast improvement thus far. – AA

This squad was as two-faced as they come. On the road, this team was as good as any, winning twice and narrowly losing two others including a tight semifinal. It was at Wickwire Field, however, where Dal football seemingly debunked one’s belief in home-field advantage, losing in three lacklustre appearances to a combined scoreline of 59-22. This is a good team—they just have to be more consistent. – IF

You’ve got to cut the women’s hockey team some slack. They lost their home arena this season after hosting the AUS championships and have been forced to play wherever they can be squeezed in ever since. Add in allegations of hazing and you start to feel for a team that is still trying to find chemistry and their identity without veteran Jocelyn LeBlanc. Lacking scoring depth, the team has struggled and now sit at the bottom of the standings. – HW

Best of the Dal Tigers: 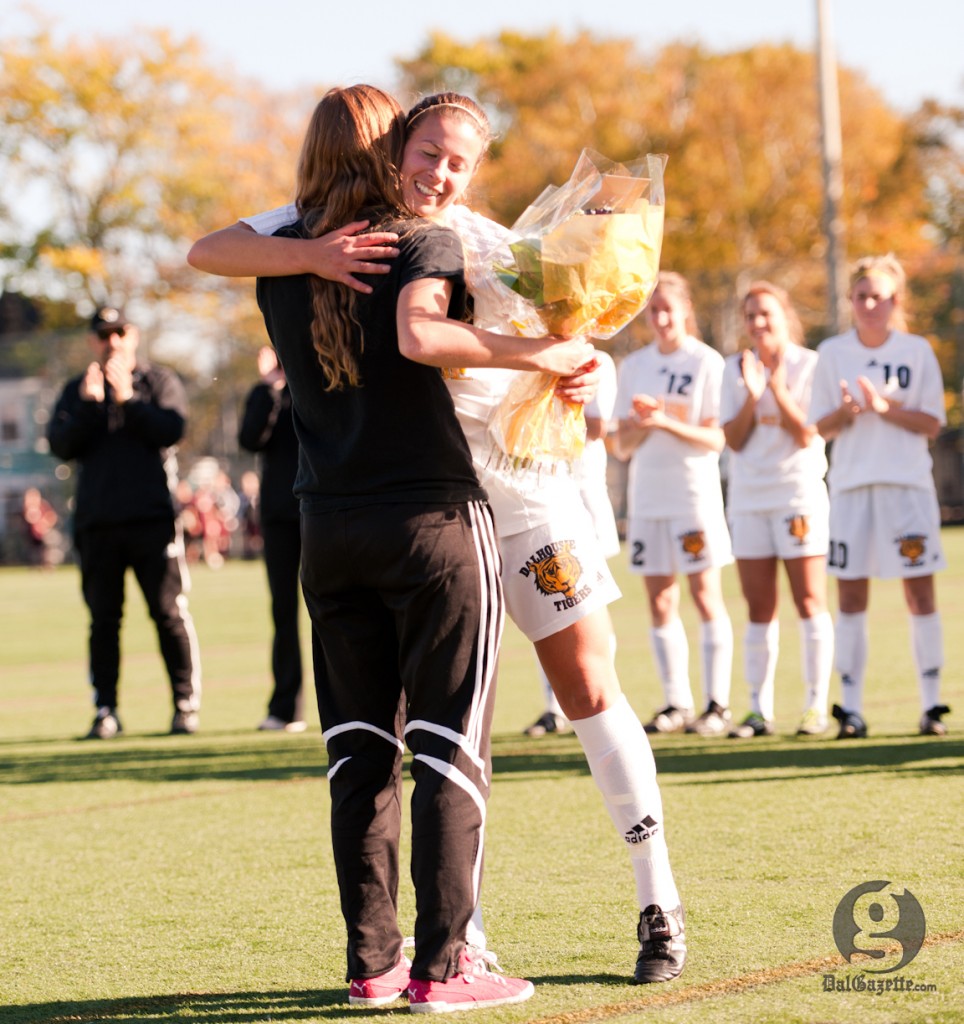 Women’s soccer captain Rieka Santilli was second in the league in points and second in goals. She also scored two game-winning goals in the regular season. What’s more, she was named the AUS MVP this year and a CIS first team All-Canadian for the second season in a row. If that doesn’t make someone a ‘Best Player,’ what does? – KG

Dal did not win, but that did not stop any Tigers supporter lucky enough to have watched this game to have faced a roller coaster of emotions. Dal fans understandably had little to cheer about in the first half, down 3-0 early. But the Tigers didn’t quit, nearly completing an unforgettable comeback. A tally in the 45th minute and a clutch two goals midway through the second half tied the match at three apiece. Dal’s rally and season would come up short in the end as they lost 4-3. – IF

Nathan Rogers had a clutch performance for the ages in a semifinal match where his team rallied from a three-goal deficit but couldn’t find the game-winner they were after. Rogers scored not one, not two, but all three of his team’s goals. If that’s not all, he was the only Tiger to find the back of the net in the playoffs, scoring the only goal in a 1-0 quarter-final. Oh, and did we mention all this scoring prowess is  from a defender? – IF 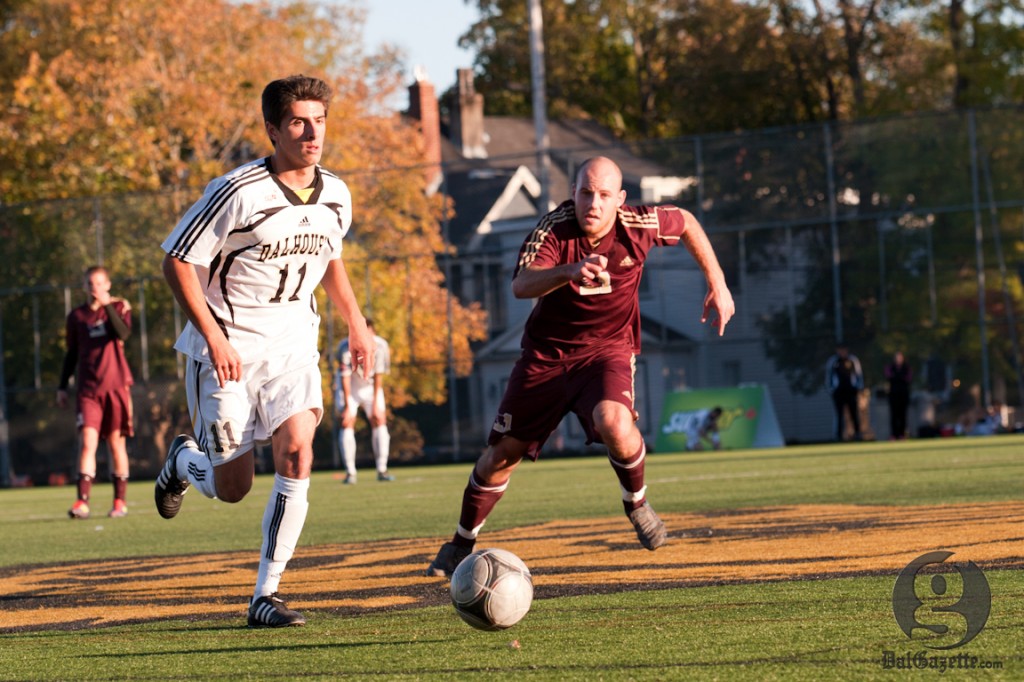 Aaron Hoyle and his men’s soccer teammates finished off their season with a semifinal loss. (Chris Parent photo)

The Tigers made the X-Men look like they’ve never held a lacrosse stick before when they wrecked St. Francis Xavier 21-6 in the Maritime University Field Lacrosse  championship. They dummied the X-Men on offence and barely let anything get by them on defense. Sure, you could credit the X-Men’s bad play to tiredness from their quadruple overtime game the night before, but can you really say that was the reason they lost by 15 goals? No, you cannot. The Tigers were used to these kind of blowouts all season, beating teams by more than 10 goals on six different occasions. – GB

The women’s soccer team had been dreaming of this since the end of last season when they won it all. Peaking at the right time, the Tigers played spoilers to Cape Breton’s perfect season, capturing the league title in style. Enjoy the top of the AUS soccer world, ladies. – AH

Glimpses of brilliance by the men’s hockey team have given fans reason to hope for the first time in a while. Now just a point out of the final playoff spot despite earlier struggles because of recent victories against St. Thomas and UPEI, Dal’s continued vigilance should eventually payoff. Increased home attendance from their league-worst total may be just the cure this team needs. – AA

Whoever said that athletes aren’t smart got it wrong. Fifth-year defender Miranda McMillan and second-year sprinter Nathan Musoke were named CIS Top 8 All-Canadians after maintaining a perfect 4.3 GPA in the 2011-2012 year. Both from the science department, McMillan had nine A+ marks and Musoke had 11. Smart and athletic? These two are total powerhouses. – KG

Ask any longtime follower of the men’s volleyball team what a rebuilding year is and they won’t be able to give you a straight answer. That’s simply because they don’t know the definition. They have their sights on first, just like they have for the past three decades at least. This team is awarded “Best Upside” because, despite seemingly starting from scratch with the addition of 11 new players, this team has already proven that they have what it takes to win the AUS championship once again. A second title in a row and their 25th in 26 years is definitely within grasp for this young squad. – GB 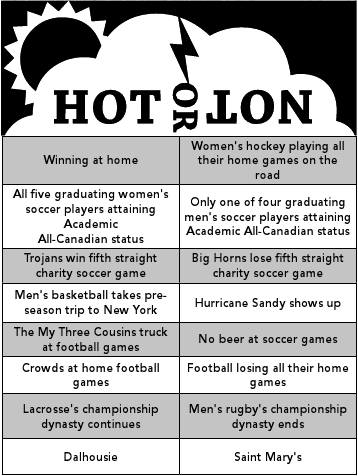