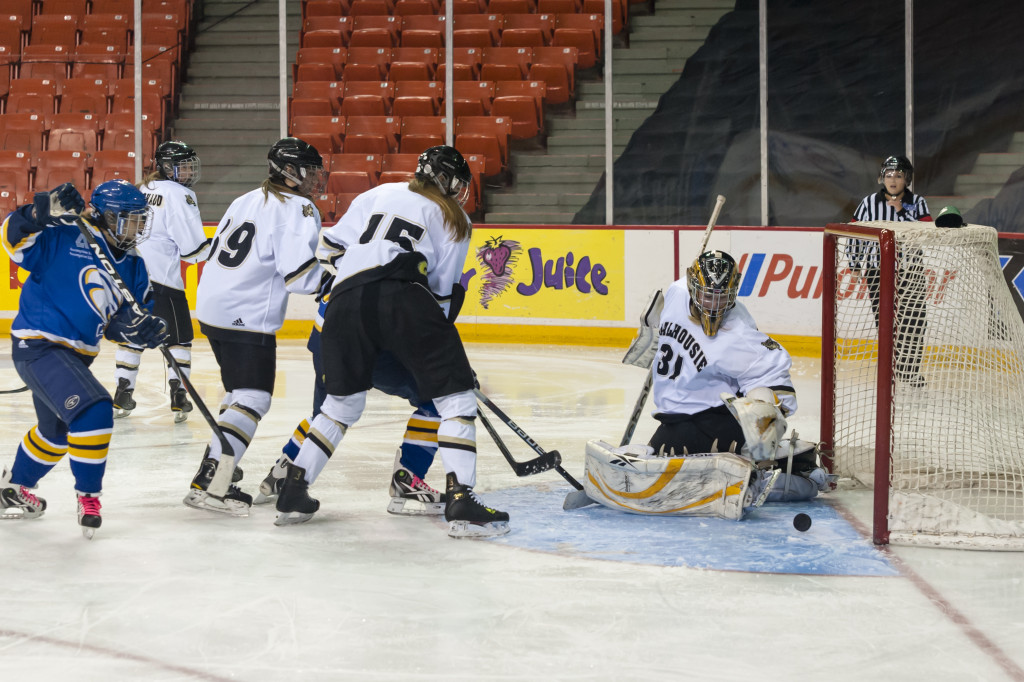 The Dalhousie women’s hockey team broke its silence Thursday afternoon with the release of a written statement. The statement details their side of the hazing saga that suspended all non-rookie players for the remainder of this season.

The statement comes on the heels of a Thursday noon deadline set by the team, before which they had requested a meeting with Dal president Tom Traves. They had intended on withholding their statement from the media if a meeting was arranged within their time span.

The team released their statement after the deadline passed, as part of their fight to revoke their penalties.

“We gave the university a lot of time to go through the process. We’ve stayed quiet just to respect that and let things fall into place,” said third-year Isabelle Germain, one of three team members to speak to the Gazette on Jan. 10.

“We accept responsibility for our actions and don’t want to diminish that,” she said. “At the same time, we want to see the restorative justice that was promised to us. We felt like now is the time to speak.”

Dal spokesperson Charles Crosby said that Traves was out of the office today but is expected to respond to the team’s letter shortly. Crosby added the university only received a meeting request from the women today.

The team has kept quiet on this hazing controversy since news of the suspension broke on Jan. 3 that the university suspended 19 of 24 players. The results of an investigation in first semester revealed a party that involved “drinking, humiliation, intimidation, personal disrespect—it was bullying,” said Crosby.

Crosby told the Gazette that despite the team’s personal appeal to the president, they are unlikely to be successful.

“We’re in no different a place than we were a week ago when this first came out,” he said. “I read the statements and they’re still being extremely selective in terms of what they’re sharing actually occurred at the party.

“The consequences are a result of the actions and one can’t undo the actions,” he added.

The statement said the team held a party to welcome its five rookies. The first years waited in a room as their teammates prepared the evening’s activities, the letter explained.

“They were sent on a scavenger hunt to find whipped cream, hot peppers, and sardines which they were later asked to eat. They then returned to dress up in odd clothing, play drinking games, and answer questions with the intention of getting to know everyone better and feeling more comfortable as part of the group,” it read.

The statement was apologetic and it asserted that nobody was forced to do anything.

Instead of a suspension, which they believe “far exceeds the severity of the events that occurred at the party,” team members are proposing a restorative remedy to educate the community on their mistakes. An explanation of this remedy is not included in the statement, but the team believes the best way to do that is as an active member of the Dal Tigers.

“If you will permit us to wear our Black and Gold, we promise you that we will do Dalhousie proud,” the letter reads.

Crosby said the university is open to the team’s suggestion of creating an education program.

“I think that would be a great thing, in terms of building towards next year and a great way to take a learning experience from this experience,” said Crosby, adding that implementing an education program would not revoke the team’s suspensions.

Though the ordeal, first-year player Laura Brooks said her time on the team has been positive.

“The experience of playing on the team has been great. We’re a family. We get along really well and I feel like we can talk about anything.”

She also feels that the punishment is unfair, saying it’s the team’s senior players who will miss out the most now that their university hockey careers have come to an unexpected end.

“I feel awful for the fifth-years and fourth-years who worked so hard for this team and they could have played their last game. I never felt bullied, I never felt upset,” she said.

“In the end, I’ve enjoyed being on this team more than any other I’ve played for.”

One of those graduating players is Miranda McMillan, who was the only player to speak to the media last Thursday when the penalties were announced.

“We were completely shocked with what we were told [last] Thursday. When I talked [to The Chronicle Herald], I was still very upset and in shock about it.”

She said the team was focused on returning from the holiday break, putting the investigation behind them as they worked toward a playoff spot.

Now that the team has gone public, they hope the university will review its decision and choose to go with a restorative justice approach, rather than a full suspension.

But above all, the team knows they let people down and want to move forward.

“We know we’re role models, and that there are young girls who look up to us and we want them to know that hazing is wrong,” said Germain.

“While we wish we could go back and make this never happen, we do know that moving forward we want a chance to pass on what we’ve learned and educate others on the issues surrounding hazing.”

“We want a chance to make this a positive, show others that we’ve learned and we really feel restorative justice is the way to go and help everyone learn from this,” she said.

“We can only hope that the university changes it mind and agrees with us.”