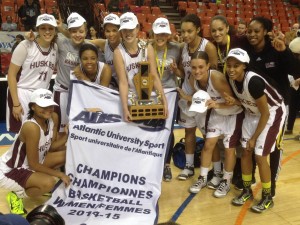 Third time’s the charm for the Huskies.

With their past two meetings resulting in a win for each team, it was bound to be a close game between the two. In the first matchup of the season, the UPEI Panthers handed last year’s undefeated champs their first loss to break a ten game winning streak.

The first quarter started off slow, with both the Huskies and Panthers each putting up a single basket in the first five minutes. UPEI’s strong defense kept the Huskies from scoring, but it was their poor field goal percentage, just 11 per cent, that kept them from pulling ahead. SMU were slow on the boards, which UPEI took full advantage of, driving the ball back to outshoot SMU 18-12. The quarter wrapped up with SMU leading by just one.

Even if it didn’t seem possible, shooting was even worse for UPEI in the second quarter. Their field goal percentage dropped to a mere eight per cent, sinking only three of 30 attempts, bringing their first half shooting percentage down to ten. The Panthers’ saving grace was their foul point conversion rate, which amounted to more than half of their total 16 points by the end of the half.

UPEI was unable to maintain or improve upon their performance in Saturday’s semifinal where they had a commanding win over Dalhousie. Finnish forward Emma Valikoski led SMU with nine points, while their season high scorer Kennisha Luberisse, who averaged 12 points per game, was unable to score the entire game. At the half, UPEI trailed 21-16.

The second half opened with both teams picking up steam. UPEI’s defensive brick wall started to crumble, and Laura Langille racked up a couple big three-pointers for the Huskies, extending their lead to 11 at the five minute mark. SMU racked up more points in the first five minutes of the second half than they had the entire first quarter, while UPEI more than doubled their entire first half score in the third quarter alone. The Panthers were able to maximize on the 21 personal fouls against SMU and posted a much-improved 42 per cent from the field in the quarter. As the buzzer sounded, the Panthers were able to narrow the gap to just four points, trailing SMU 38-34.

Desperation for both teams kicked in in the final quarter, with several tussles for the ball and the score staying close. While the scoring slowed down, the ferocity from both teams remained high. With only 2:30 left, UPEI was able to cut SMU’s lead to just three points. But as quick as UPEI managed to come back, they lost it just as quickly. A stream of personal fouls against UPEI helped SMU widen their lead to complete their three-peat with a final score of 57-50.

In SMU’s first season without Justine Colley, CIS all-time high scorer and female athlete of the year, the young SMU team was able to keep pace with the veteran-heavy UPEI squad.

Langille, who was the defensive and overall player of the game, acknowledged that the team changed after Colley’s graduation.

“The team dynamic was definitely different this year,” she said. “We knew we needed to spread the scoring out among the five players and that’s exactly what we did.”

Both Langille and head coach Scott Munro credited the team’s win to preparation and experience.

“We’ve had lots of girls here before and our confidence in a big game is what got us through. We defended well and did what we had to do,” said Munro. “Looking ahead, we’ve got a three-game series so we’re just going to be focusing on getting through each game.”

Saint Mary’s is off to the CIS championships at the Université de Laval, with the action getting underway March 12.