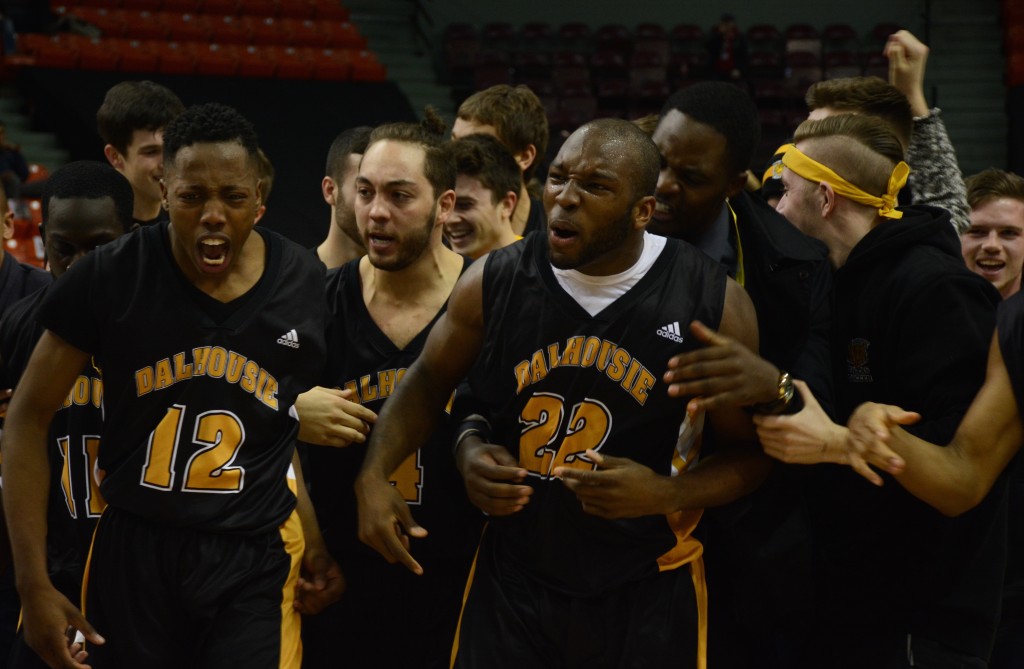 It was a game fit for Hollywood.

In the first quarterfinal game of the Atlantic University Sport (AUS) championships, the Dalhousie men’s basketball team came from behind to beat the Cape Breton Capers with an amazing buzzer-beater.

Despite the eventual win, it was far from an easy game for Dal. Perhaps it was the jitters or maybe the distracting drum line in the Cape Breton fan section, but whatever the reason, Dalhousie was in a serious funk for most of the first half.

Things got off to a rough start for the Tigers who only managed to post an embarrassing six points the entire first quarter. The Tigers were all over the place in terms of defense and play execution. Point conversion was an obvious struggle for the Tigers.

The second quarter didn’t start off much better for Dal with CBU leading by nine at one point. But third-year Kashrell Lawrence made several huge steals to keep Dal in the game. Something clicked in the last four minutes of the half and the Tigers, led by Lawrence and first-year Maurice Colley, came alive and clawed their way back to trail the Capers 30-26 at halftime.

Dal ended the first half with a field goal percentage of just 28.5 per cent, which was still a vast improvement of their earlier first quarter conversion rate of just 10 per cent. While Dal certainly had a disastrous half, it was CBU’s high turnover rate that kept Dal from being utterly dominated on the scoreboard. In the second quarter, Dal hit 20 points to CBU’s 17, thanks to a couple key steals.

Dal stayed on CBU’s heels the entire third quarter, tying things up right off the bat at 30. They kept pace with CBU, tying things up again at 37 before CBU was able to pull ahead again. Cedric Sonogo had a killer third for the Tigers, with his defensive play just as strong as his offensive, posting 10 points. The quarter ended with Dal trailing again by four, 45-41. 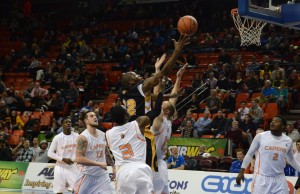 Lawrence had a game-high 22 points in the Tigers’ quarterfinal win. Photo: Jennifer Gosnell

The final quarter had fans from both sides riled up. Tied at 48 a piece, Sonogo sunk a foul shot to give Dal the lead for the first time in the game. The lead went back and forth for the next five minutes, leaving the Tigers trailing by four with three minutes remaining.

Things really started heating up at the two-minute mark when Dal’s Jarred Reid made a steal and dished it to Ritchie Kanza Mata, who made a great basket to tie the score at 58. With 45 seconds remaining, CBU’s Akeem Isaac-Phillip sunk two foul shots to give them a two-point lead. Dal quickly answered with Reid sinking an off-balance jump shot to tie the score at 60 with just 23 seconds remaining.

CBU’s inbound pass was stolen by Kanza Mata, who passed it up to an open Lawrence. With the shot clock and game time both running out, Dal wound down the clock passing the ball back and forth. Second-year Tiger Sven Stammberger got the ball and made his way to the basket, only to find Lawrence on the outside of the key. As the clock neared zero, Lawrence lined up and fired a shot right over the heads of CBU players just as the buzzer sounded. After a disastrous start to the game, Dal won 62-60.

Despite the positive outcome for Dal, the celebrations will likely be tempered with stern words from head coach Rick Plato. If Dal hopes to win again in the tournament, they can’t afford to have another horrible start, especially given their next opponent. Dalhousie faces the top-ranked UNB Varsity Reds Saturday at 6 p.m. in the first game of the semifinals.