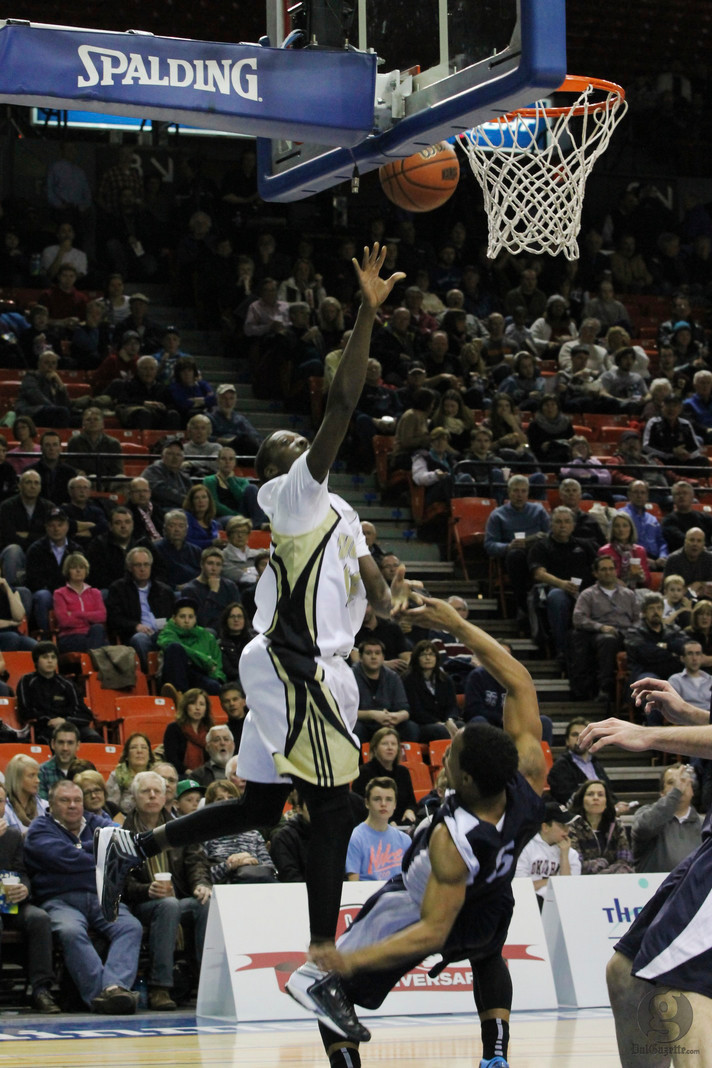 A spot in the semifinal was out of reach for Dalhousie. (Shauna Brown photo)

In what’s been an up and down year for Dalhousie’s men’s basketball team, inconsistency reared its ugly head yet again— but this time it cost them their season.

Despite a strong finish that gave them a fourth-place ranking, the Tigers could not capitalize on their late season momentum as they fell in dramatic fashion to fifth-seeded St. Francis Xavier 74-70 Mar. 1 at the Halifax Metro Centre.

A strong crowd of approximately 4,200 was treated to an absolute classic, which saw St. FX fend off a late Dal charge to advance into the semifinal against top-seeded Cape Breton Mar. 2.

With the score 59-45 heading into the fourth quarter, the Tigers caught fire and went on a 15-2 run to bring them within one point late in the game. Jeremy Dunn came up huge for the X-Men with two clutch three-pointers to stop the rally and give his team a six-point advantage in the dying minutes.

“We did a good job sticking it out down the stretch,” says Dunn, an AUS first team all-star. “It felt great to make those threes late in the game. Give credit to [the Tigers]; they’re a very scrappy team.”

But the match ended with controversy. With the X-Men leading 72-70 in the final 30 seconds and the scoreboard reading four fouls for Dal, the Tigers intentionally fouled St. FX, thinking that it would send the X-Men to the free throw line. Havoc ensued on the Dal bench, however, as an error was revealed. After deliberating with the referees, the stat keepers revealed that Dal only had three fouls. The mix-up resulted in an inbound pass for the X-Men instead, wasting valuable time in Dal’s comeback attempt.

In this next possession, St. FX’s William Donkoh was intentionally fouled and iced the game by converting both of his free throws to give the X-Men the victory.

Dal’s streaky play all night served as a metaphor for their season. Heading into the new year, the Tigers were 2-5 and did not look like a playoff team. But in posting a 9-4 record in 2013, Dal turned into a completely different squad.

Head coach John Campbell said his team never seemed to find solid footing against the X-Men, largely due to their inability to find a groove offensively.

“We were far too inconsistent to win a playoff game,” he says. “I’m proud of our guys for battling back in the fourth quarter, but you can’t expect to win against good teams when you’re playing like that.”

Hassan Abdullahi had a game-high 20 points for the Tigers, while Jarred Reid had 16 points of his own to go along with eight rebounds. Dunn and Tyler Vernon led the way for St. FX with 17 points apiece.

After the game, fourth-year Tiger Simon Marr stressed that his team must use this loss as motivation for next year.

“We have a young team; all of our guys are coming back next season,” he says. “I think if we work hard all summer we can come back and avenge this loss.”