Playing the game of love 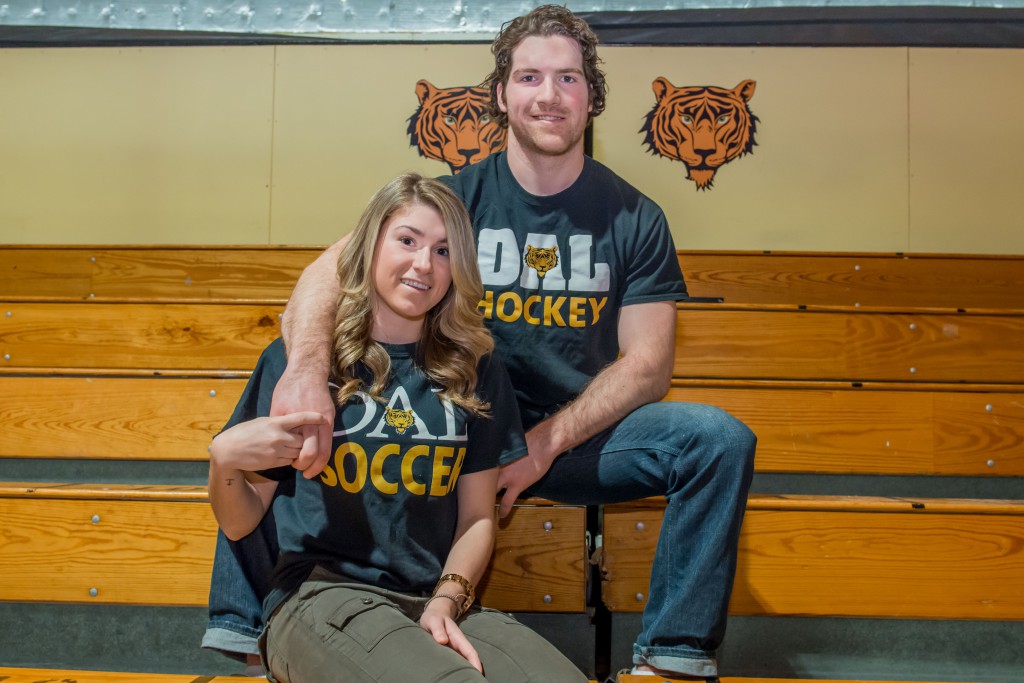 Though they’re both Dalhousie athletes, Ben and Ashley also form a team of their own. (Photo by Amin Helal)

Here at the Gazette, we know that if there’s one thing Valentine’s Day is good for, it’s testing your partner in a series of elaborate mental challenges. That’s why we sat down with Dalhousie Tigers hockey player Ben MacAskill and soccer player Ashley Donnelly—together for ten months—to put their knowledge of one another to the test. Turns out, they’re pretty good at this.

Ashley’s Moment of Truth (How Well Do You Know Ben?)

Who is Ben’s favourite athlete?

Ben MacAskill: I thought it was pro athlete…

BM: … I thought it was pro athlete.

AD: Is it the hockey guy with the good hands? Last name with ‘L’? The one you showed me a YouTube video of?

What is Ben’s biggest pet peeve?

What is Ben’s favourite food?

AD: Is it a meal, or just one thing? Steak and mushrooms?

AD: Why not? That’s my favourite.

BM: Yeah. She introduced me.

What is Ben’s favourite book?

BM: I don’t think you’ll know this one…

If Ben could listen to only one musician for the rest of eternity, who would it be?

BM: Think of how many CDs are in my car.

According to Ben, who is the messy one in the relationship?

What is Ben’s favourite movie?

BM: Did I answer that [on the question sheet]?

BM: I forgot about that one.

DG: What would be your favourite movie?

According to Ben, how did you two meet?

AD: You grabbed me at the Grawood. And we went to Starbucks together. Is that what you said?

BM: Yeah—what did I say?

DG: (reading back) ‘At the Grawood on St. Patrick’s Day. Grabbed her and said hello. I had her at hello.’

What is Ben’s favourite hangout spot in Halifax?

If Ben could be a movie star, who would it be?

AD: Who is it? Who would you want to be?

BM: (pauses) Who was your man-crush before me? Lives in your town [Burlington, Ont.].

AD: Ryan Gosling? That’s who you’d want to be? (laughs) Oh my gosh.

DG: I would probably choose Ryan Gosling too.

INCORRECT (But we still learned about ourselves)

What does Ben consider the better sport: soccer or hockey?

DG: Do you go to each other’s games?

AD: He didn’t come to mine, but I went to his. (laughs) I go to every one of his. I’m very dedicated.

Who has been the most influential role model in Ben’s life?

AD: Your grandpa? Or your dad? Your dad.

DG: And why is that?

BM: He was just always there for me. He came to watch all my games, would always tell me how I could be better.

What does Ben consider to be his best quality?

AD: I think Ben’s very humble and really nice and everyone loves him. I’ve never heard him say a bad thing about anybody in this world. He’s just one to love.

BM: I was going to say kindness, yeah.

And finally, of course, the necessary Twilight question: Team Edward or Team Jacob?

DG: That was a pretty solid round.

Ben’s Moment of Truth (How Well Do You Know Ashley?)

What is Ashley’s favourite sports team, in any league?

AD: You watched one of the games. Maybe two. In Halifax.

Who is Ashley’s favourite athlete?

BM: You always do better than me…

What is Ashley’s biggest pet peeve?

BM: Learn those ones pretty quick.

If Ashley could listen to only one musician for the rest of eternity, who would it be?

AD: This is a hard one, because it was hard to think of.

BM: Yeah, you like a lot of different stuff. Beyoncé.

DG: I’ll have to figure out if that one actually counts.

What is Ashley’s favourite hangout spot in Halifax?

DG: Back on track.

What personal athletic achievement is Ashley most proud of?

BM: (pauses) Coming to Dal and playing for Dal? AUS championships? CIS nationals? All those?

What is Ashley’s favourite movie?

AD: And something else.

AD: White Chicks! We literally talked about this.

What makes Ashley laugh, every time?

AD: Yeah. (they both laugh)

BM: It’s not even my joke. Two turtles are sitting by a pond, and one turtle and says (begins drawing out every syllable, like a turtle) ‘When it rains, do you get water in your mouth?’ And the other turtle says, (puts on turtle voice again) ‘no.’

BM: You can’t really write it down. You need to see it happen.

According to Ashley, what’s the better sport: soccer or hockey?

DG: It would have been really interesting if one of you had said the opposite.

AD: I already said I thought he was my favourite athlete. And he didn’t say I was.

BM: I’ll never live that one down. You *are* my favourite athlete.

According to Ashley, where was your first kiss?

What is Ashley’s favourite exercise routine?

DG: What about least favourite?

AD: Yeah, sprints. I hate them.

What is Ashley’s favourite book?

Who has been the most influential role model in Ashley’s life?

What does Ashley consider to be her best quality?

BM: She has so many amazing qualities, but… she makes me laugh all the time. Very funny. (turns to Ashley) What do you think?

BM: Is that what you think your best quality is?

BM: That’s not what you were thinking of.

BM: That’s a good one. Most of the time.

AD: Most of the time, yeah. I’ve been working on that, though. (laughs) I’m opening my mind to different opinions. It’s crucial in a relationship.

And again, finally, the most important question: Team Edward or Team Jacob?

BM: You were Edward.