The Ticker (For the week ending Feb. 2) 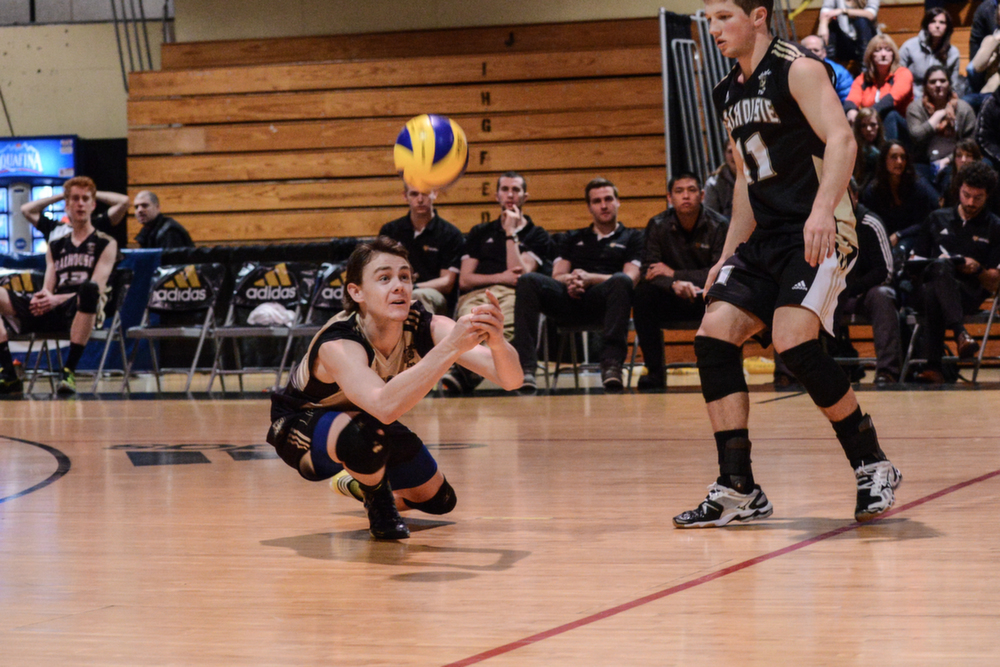 Playing UNB is always a battle. (Photo by Kit Moran)

A season-long battle for Atlantic University Sport (AUS) dominance continued last weekend, as the Dalhousie Tigers and UNB Varsity Reds—ranked first and second, respectively, in the small Atlantic conference—split a two-game series. In the first match, on Feb. 1, Kristen O’Brien’s 13 kills and Bryan Duquette’s 14 digs propelled the Tigers to a narrow 3-2 victory. The Dal players demonstrated resilience throughout the game, winning the second and fourth sets before capping things off with a 15-12 victory in the final round. However, that mental toughness evaporated on the afternoon of Feb. 2, as the Reds beat the Tigers soundly in straight sets (25-18, 25-21 and 25-16). The teams will meet again in the AUS championship. Game 1 of the best-of-three series is Feb. 7 at 7 p.m. at the Dalplex.

Abby Czenze (7) jumps for the block. (Photo by Kit Moran)

The Dalhousie women’s volleyball team extended their winning streak on Feb. 1 and 2, beating both UNB and Moncton, respectively, in straight sets. On Saturday night in Fredericton, the Tigers were forced to contest every single point—winning two of the three sets by extremely slim margins (28-26, 25-18, 25-23). Desiree Nouwen contributed 11 kills to the winning cause, while UNB’s Celina Abba delivered 10 of her own in defeat. Sunday’s game in Moncton was not nearly as close-fought, as the Tigers won the first two sets handily before putting an exclamation mark on the weekend by pounding the Aigles Bleues 25-14 in the third. Marisa Mota’s 12 digs and Maggie Li’s 11 kills led the way for the Tigers (11-4), who wrested control of first place in the AUS from Saint Mary’s (10-4) with the win. 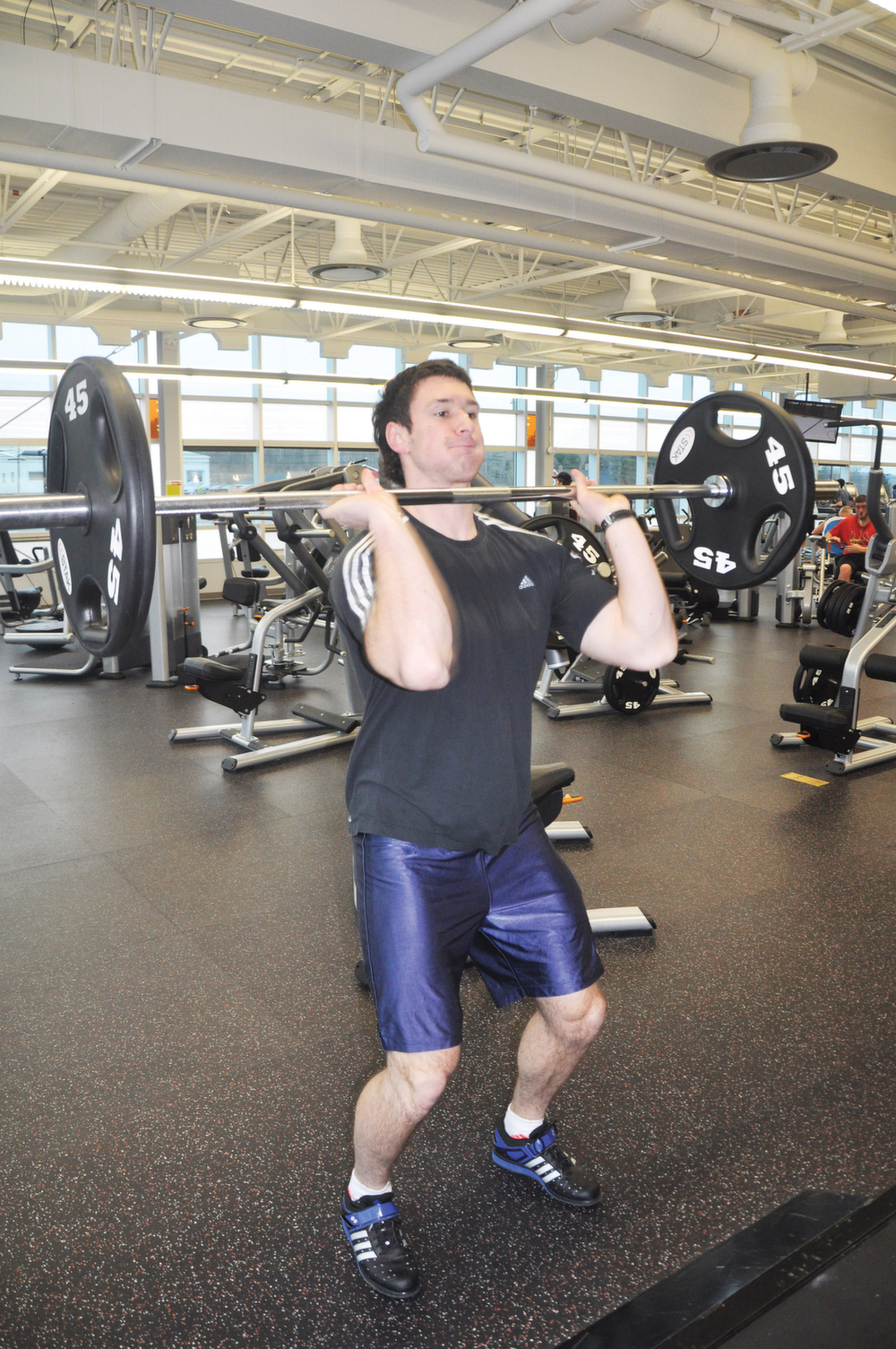 A former Dalhousie varsity athlete is on his way to the Olympic Games in Sochi, Russia. Last week, Luke Demetre—a sprinter-turned-bobsledder hailing from New Glasgow—was officially selected as the fourth member of a bobsledding team that also includes Lyndon Rush (a bronze medallist at the 2010 Vancouver Games), Chris Spring and Justin Kripps. Because the sleigh can only hold three athletes, Demetre, as an “alternate,” will be on standby  should one of his teammates get injured. During his time as a sprinter on Dal’s track and field team, Demetre was twice named an AUS all-star (in 2008-09 and 2009-10). Now based in Calgary, Demetre has spent the past four years participating in bobsleigh competitions on the Europa Cup and World Cup circuits. 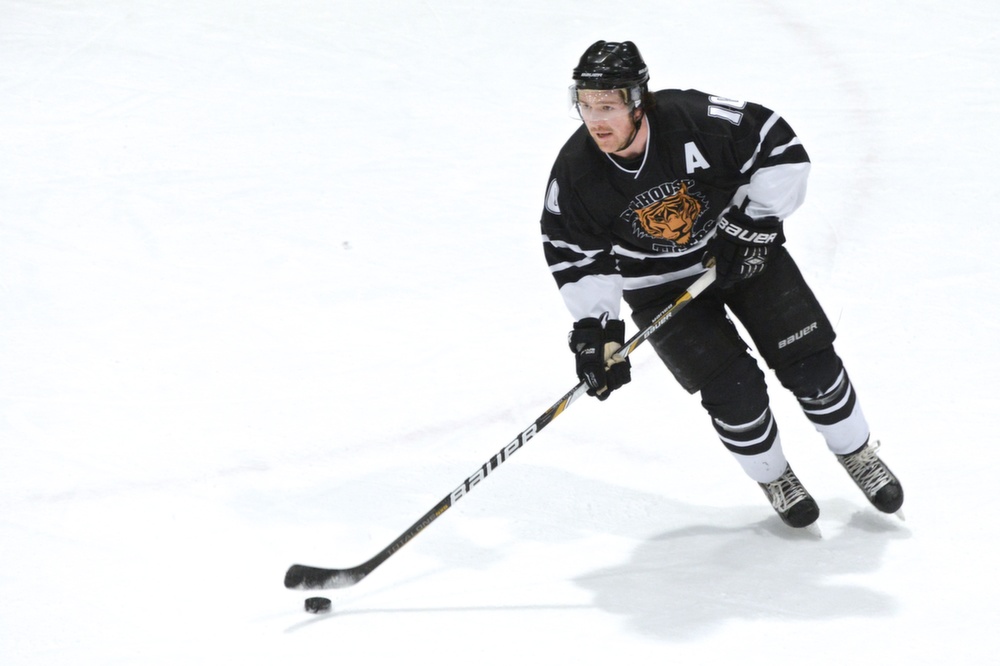 Ben MacAskill had three assists in the UPEI win. (Photo by Kit Moran)

Clearly happy to see a dismal January finally coming to a close, the Dalhousie men’s hockey team celebrated with two impressive fireworks displays on Friday, Jan. 31 and Saturday, Feb. 1. Facing off at the Forum against St. Thomas on Friday night, the Tigers nearly clawed their way back from a 7-4 third period deficit, closing to within a single goal before allowing an empty-netter in the game’s dying seconds to lose 8-6. The offensive outburst continued throughout the next night’s match against UPEI, as Andrew Langan’s hat-trick and assist earned the Tigers a 7-3 upset of the fourth-place Panthers. The women’s team experienced a much quieter weekend, falling 2-1 to visiting St. Thomas on Jan. 31. For the second week in a row, goaltender Mati Barrett was the Tigers’ best player, making 28 saves in a losing effort.