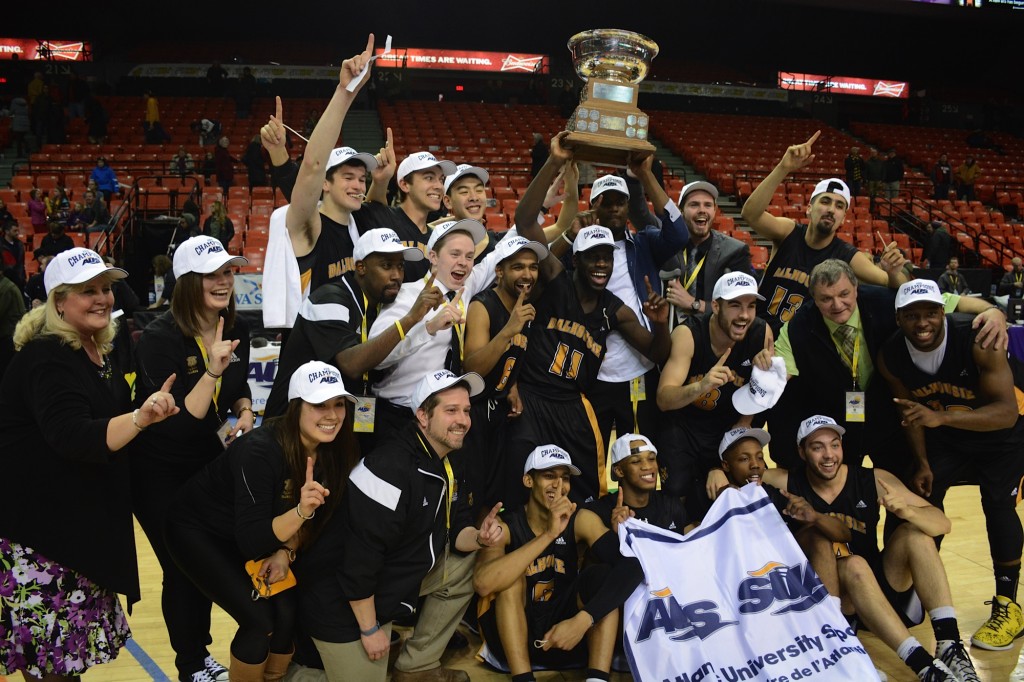 The Tigers celebrate after winning their first AUS championship since 2011. Photo: Jennifer Gosnell

Just when it looked like the clock was going to strike midnight on the Dalhousie Tigers’ Cinderella run in the Atlantic University Sport (AUS) men’s basketball championship, the black and gold managed to find a way to pull through in dramatic fashion, crowning them AUS champions in the process.

Pitted against bitter cross-town rival Saint Mary’s in front of a packed house at the Scotiabank Centre, the Tigers found themselves behind at halftime by a score of 41-28 and trailed 60-52 at the end of the third. But as they proved all tournament, Dalhousie came up big when it mattered most. With the scoreboard reading 73-71 in favour of the reigning champion Huskies and 27 seconds on the clock, Ritchie Kanza Mata drained a clutch two point jumper to send the game to overtime.

The see-saw battle continued in OT, but Kanza Mata drained a huge three pointer to put Dal up 82-78. Once Dal grabbed the lead they didn’t look back and finished extra time with the score 88-78. The Halifax-based schools put on a show in front of the hometown fans – the proverbial cherry on top of a fantastic weekend chalked full of captivating action on the hardwood.

Tournament MVP Kashrell Lawrence finished the matchup with a game-high 31 points and 17 rebounds for the Tigers, while Jarred Reid had 17 and Kanza Mata 16. Brian Rouse led the way in the losing effort for SMU with 21 points.

On the heels of back-to-back come-from-behind victories, the fifth-seeded Tigers (who finished the season with a 10-10 record) successfully conjured up the same kind of second half magic that they had in the previous two days of the tournament.

Riding a wave of momentum in the wake of Kashrell Lawrence’s buzzer-beater over Friday’s quarterfinal clash with Cape Breton, the black and gold raised quite a few eyebrows by stunning the No. 8 nationally ranked UNB Varsity Reds 85-74 in the semis thanks in large part to a phenomenal fourth quarter.

Next up for head coach Rick Plato’s crew is a trip to Toronto for the Canadian Interuniversity Sport men’s basketball championships on Mar. 12 with the aspirations of claiming the school’s first ever national title.

Plato pointed to a speech by Canadian Olympic bobsled gold medalist Heather Moyse at the league’s banquet as a major motivating factor for his team.

“The first thing I’m going to do is get them all to write [Moyse] a thank you letter,” said Plato. “Her speech hit a nerve for a lot of our guys. She spoke about triumphing in the face of adversity – something we’ve had a lot of this year.”

“It looked pretty bleak for us in all three games, but we dug deep and rose to the occasion when we needed to.”

With his teammates engrossed in jubilation around him, Reid reiterated the laser focus the Tigers displayed on accomplishing their goals in the face of adversity.

“We had one mentality coming into the playoffs and it was to make one more play, take one more step, win one more game and make it to the finals and that’s where we made it count,” said point guard Jarred Reid.

It’s important to point out just how far the school’s basketball program has come in a very short time. Coming off a 2013-14 campaign where they went 6-14 in the first year of the Plato era, few could have predicted the squad’s deep postseason run and were an afterthought by many heading into the tournament.

Amazingly, Dal only has one graduating player on the roster (John Traboulsi), meaning the tight-knit group is primed to parlay this year’s championship experience into what could very well be the start of a dynasty for years to come at Atlantic Canada’s largest university.