The game opened with each offense struggling to move the ball. The Hurricanes were able to gain an edge in field position when a ‘coffin corner’ punt by Hurricane Jay Dearborn had the Tigers starting their third possession of the game from inside their own 15-yard line.

Unable to move the ball down the field, the Tigers intentionally conceded a safety on 3rd and long to open the scoring and give the Hurricanes a 2-0 lead.

The decision to concede the safety and gain field position paid off for the Tigers on the next Hurricanes drive.

Tigers cornerback Rob Wilson picked off a tipped pass from Hurricanes quarterback Anton Sianchuck to give the Tigers the ball back within the Hurricanes 40.

The Tigers were unable to fully capitalize on the opportunity and settled for a Wilson field goal from 30-yards for a 3-2 lead at the end of the first quarter.

The Hurricanes opened the scoring in the second quarter when Sianchuck eluded the Tigers rush stepping up in the pocket and scampering for a 25-yard touchdown run up the left sideline making the score 9-3.

The Tigers answered right back with a sustained drive of their own. They marched the ball down the field on the back of RB Zach Leger and QB Nick Hunsley who connected with Gullimae Bernier for a 30-yard gain to spark the drive.

The Tigers were unable to punch it into the end zone and settled for another Wilson field goal try. A low snap disrupted the timing and the kick went wide right for a single point ‘rouge’ and a 9-4 score at the half.

The second half opened with a bang for the Tigers. Leger was able to bust a big run off right tackle to get the ball inside the Hurricane 20. A few plays later Hunsley lofted a pass into the end zone to Alex Bayne running a wheel route up the left sideline, Bayne outmuscled a Hurricane DB climbing the ladder to make the catch and put the Tigers up 11-9.

The Hurricanes responded by marching down the field with two Sianchuck to WR Jeff Hillier completions on hitch routes to the left sideline and a few big runs by RB Carson Halliwell. The Tigers D bent but did not break as the Hurricanes only came away with a Dearborn field goal from 30-yards for a 12-11 lead.

The turning point of the game came on the next Tigers possession. They failed to block the Hurricane edge-rush off left tackle forcing Hunsley to try and drop the ball off to his RB but the pass landed in the hands of Hurricane DE Dylan Echlin who went 35-yards for the pick six and a 19-11 lead.

Both teams were able to gain some yards in the fourth but neither offense was able to score again. The Tigers had a promising drive where Hunsley found Bernier for a couple of big completions on seam routes up the middle, but the march ended with a Wildens Sertyl interception for the Hurricanes.

“We’re bigger and stronger than we were last year,” says Wetmore. “I’m certainly happy with the guys we have.” 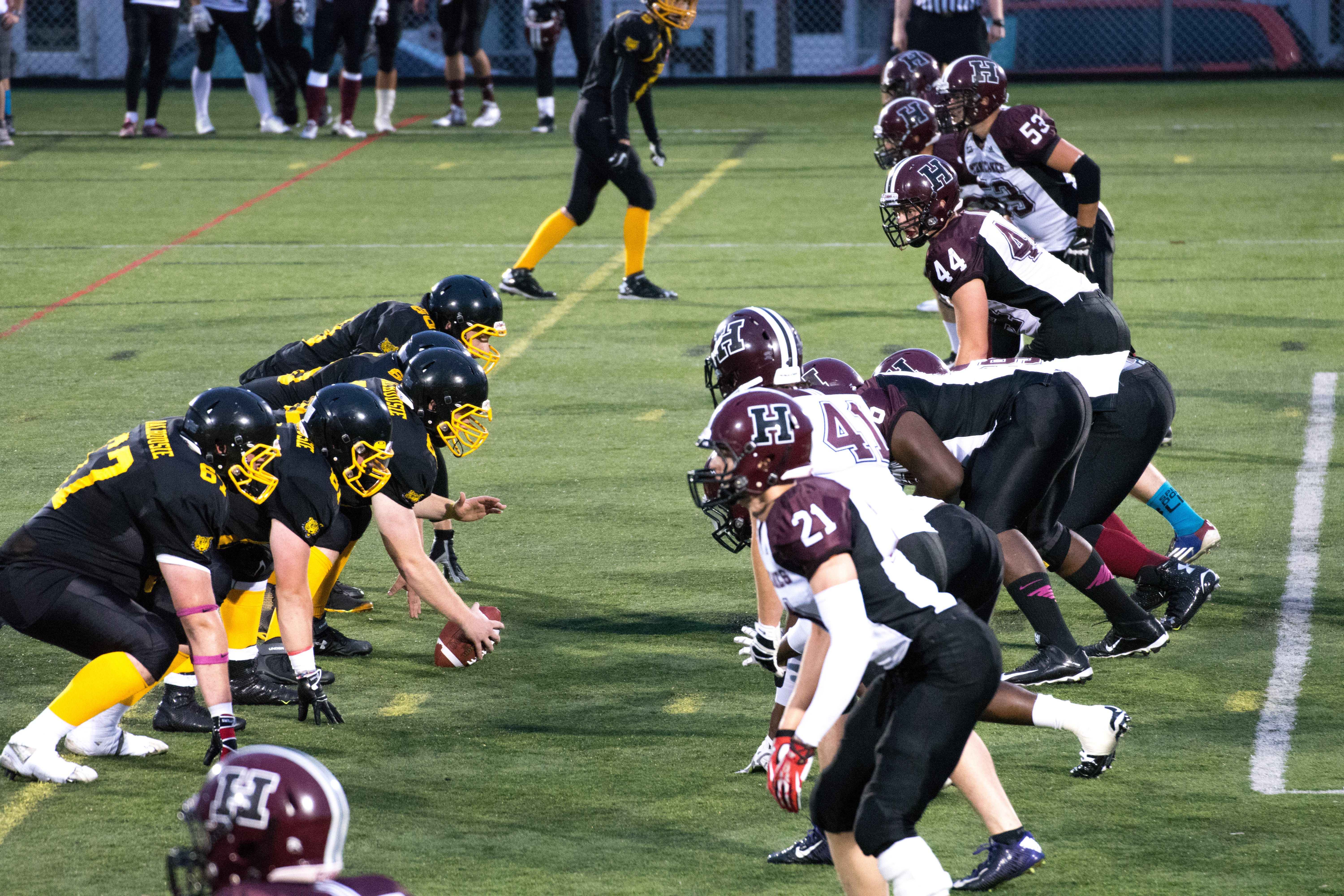 Statistics were unavailable at the writing of this article.

Other Notes: Tigers defensive lineman Emmanuel Gilbert was a force in the game. He had three sacks, a number of quarterback hurries and made some big tackles in the run game as well.

Stefan Strecko did a great job returning kickoffs and punts. He showed sure hands and a knack for catching the ball in the air. He should solidify a position that was a major weakness of the team last year.

Wilson was tremendous for the Tigers in the kicking game, specifically on the punt team. He was instrumental in turning field position in favour of the Tigers with deep directional kicks that allowed the coverage team to get downfield to make tackles. The punt team was a big issue for this squad last year and appears to be vastly improved this season.

The Tigers are on the road on Sept. 26 and will play their next home game at Wickwire Field on Pinktoberfest Saturday, Oct. 3 against the University of New Brunswick Saint John Seawolves.