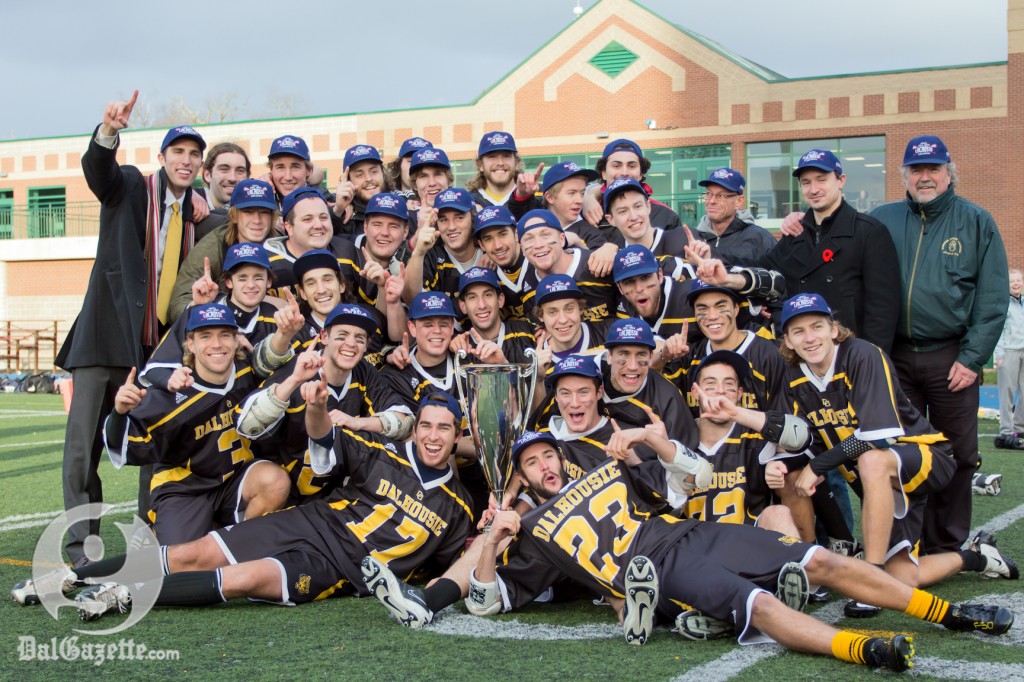 The game started with a slight mist and ended with a downpour of celebratory Mountain Dew.

The Dalhousie Tigers defeated the St. Francis Xavier X-Men by a score of 21-6 in the Maritime University Field Lacrosse (MUFLL) Championship at Huskies Stadium on Nov. 4.

The championship was Dal’s fourth title in five years and the second season in a row these two teams have met in the final.

Tigers head coach Glenn Dunbar was quick to praise his team after winning another MUFLL trophy.

“These guys came together. We have lots of rookies but there is no ego and they are a hard-working group,” he says.

The X-Men, coming off a quadruple overtime semifinal that lasted until almost midnight the night before, struggled to keep up with the Tigers. They did, however, keep it close for the first quarter and remained feisty throughout the match.

Play was back and forth early in the game. Entering the second, the score stood at 6-3, a poor indicator of how close the game actually was.

Momentum shifted to the Tigers in a big way in the second quarter. A huge hit by one of the Tigers leveled an X-Men, leading to a Dal goal to make it 7-4. On the ensuing play the X-Men missed a string of shots. When the Tigers finally regained control they took the ball up the field and scored, resulting in an X-Men time out and the fired-up Tigers to take momentum.

Dal continued the scoring and by half they led 11-4.

The Tigers never looked back in the second. They showed patience on offense and overwhelmed the X-Men the odd time they actually had to defend their net.

On the other hand, the X-Men, with a shorter bench and seemingly tired from last night’s victory, struggled as the championship wore on.

Despite a young core, Dal fourth-year veteran Stu McIlhone, playing in his last university game, thinks the team is in good hands.

McIlhone didn’t have much time for an interview though, as he was called back to the field by his teammates.

The victory and the Mountain Dew still need to be savoured.