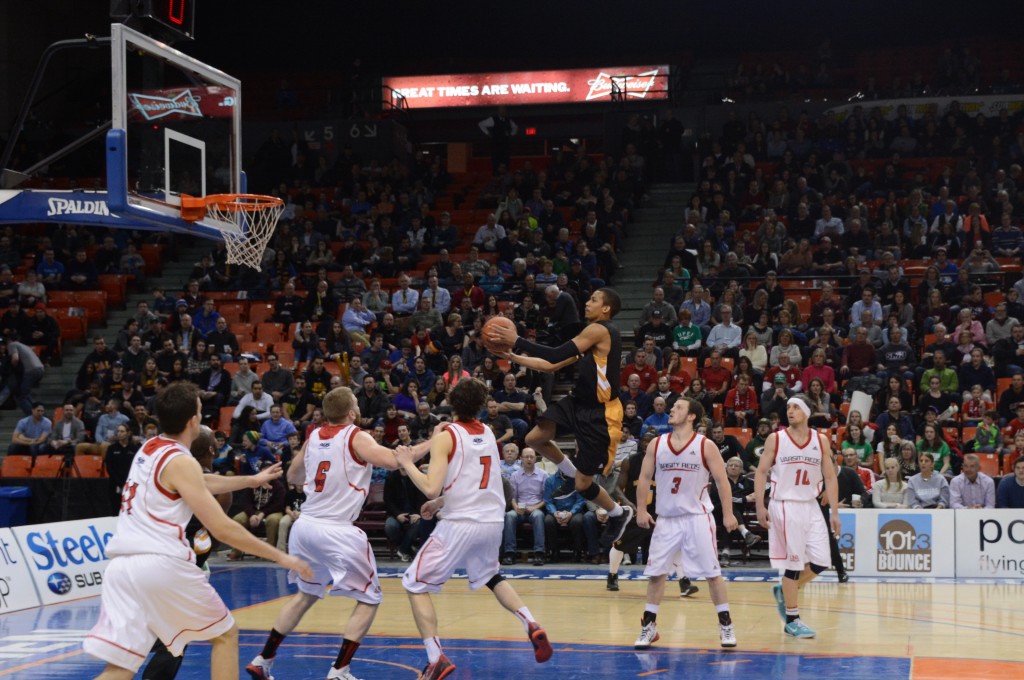 If you didn’t know Sven Stammberger’s name before, you certainly know it now.

In semifinal action at the Scotiabank Centre Saturday evening, the Dalhousie Tigers topped the University of New Brunswick Varsity Reds 85-74 to punch their ticket to the Atlantic University Sport (AUS) championship game and will face the winner of Saint Mary’s and UPEI.

The underdog Tigers trailed 40-29 heading into halftime and 58-57 at the end of the third. Momentum started to shift in favour of the black and gold thanks to a three-pointer that put Dalhousie up 70-68 with the clock reading 4:10 in the fourth frame. After a Richie Kanza Mata layup, the second-year Stammberger sunk yet another trey that sent the hometown fans into a frenzy.

That sequence of plays proved to be too much for the CIS eighth-ranked V-Reds to overcome. Despite finishing the season with a 16-4 record and earning a first round bye, UNB folded in the fourth quarter and let the game slip away. The outcome is a theme that’s become all too familiar for fans of the red and black; the last time the V-Reds raised a championship banner was all the way back in 1967 – the only title to their name.

Stammberger finished with a game-high 20 points and 11 rebounds. Jarred Reid led the way at point guard, dropping 19 points as well as contributing three steals and five boards. Kashrell Lawrence – fresh off a game-winning buzzer-beater over Memorial the night before – bounced back after a rough first half to finish with 15 points and 11 rebounds.

With one game standing between them and capturing a second championship in the last five years, Reid is remaining focused on the task at hand.

“We need to play with the same heart and consistency we’ve shown all season long,” he said. “We just need to come out and play our Dal Tigers game.”

Unlike their semifinal counterparts, wins didn’t come as easily for the Tigers. Finishing the year with an even 10-10 record, the squad suffered a major blow in their first game back in the new year once big man Devon Stedman went down for the season with a knee injury. Reid is a firm believer that the adversity the team faced this season provided a foundation for the title run.

“Losing Devon was a big loss for us,” said Reid. “But we always found a way to come back during the season and it’s obviously helping us out during the playoffs.”

For UNB, an elusive return to playoff glory will have to wait at least another year. For Dal, a team that’s clearly embraced the underdog role it’s been given, will try to prove themselves one last time on the biggest AUS stage.

The Tigers will play in the championship game against the Saint Mary’s Huskies Sunday at 4:30 p.m.