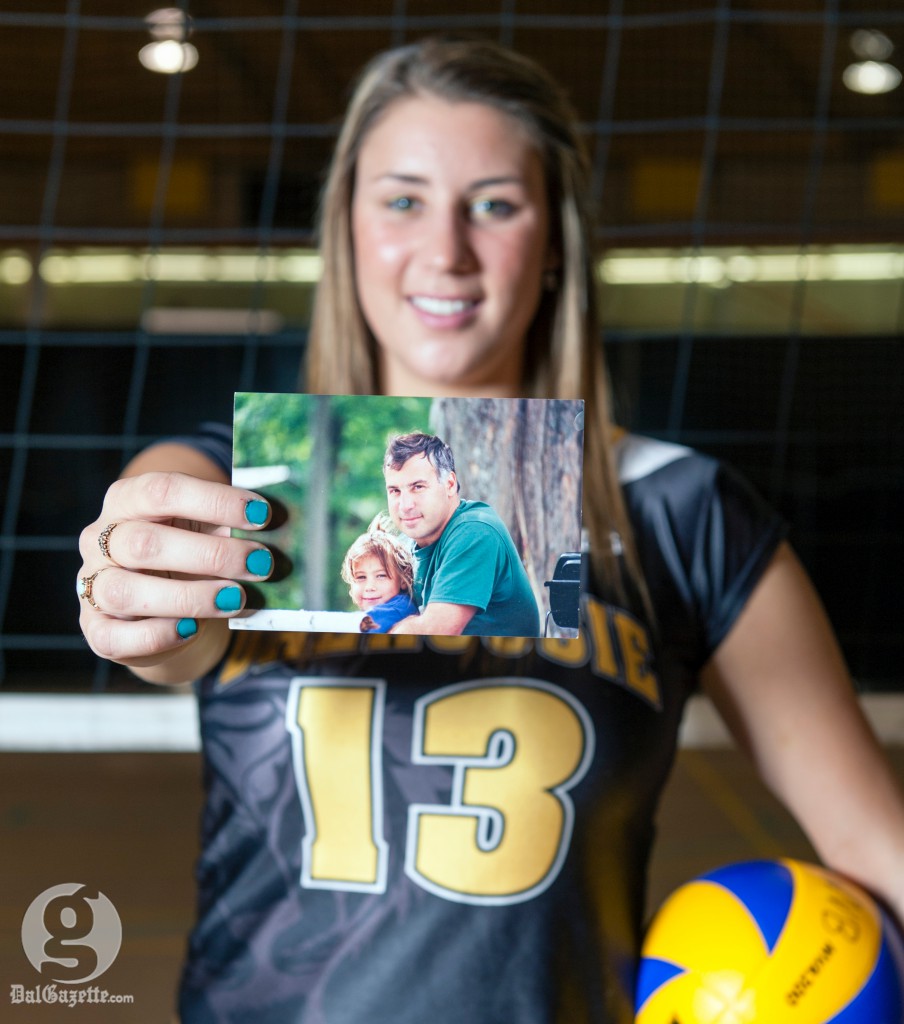 Successful athletes tend to share a common trait: they are constantly striving for greatness.

Louise Facca is a fifth-year therapeutic recreation student and a left outside hitter on the Dalhousie women’s volleyball team. Among her achievements, Facca is a two-time AUS first team all-star and last season’s team MVP.

“I obviously want to just try and be the best athlete I can be, and represent the program,” says Facca. But her family and teammates know there’s more that drives her to succeed.

Louise’s father, Adrian, was diagnosed with chronic lymphocytic leukemia in 2004. He died in May 2011 at age 53.

“I’d say he was the strong, silent type,” Louise recalls.

Adrian’s work as the vice president of a transportation company required him to travel frequently, but he always made an effort to watch his daughter’s games on webcast. “If my mom was here watching me, I knew that my dad was watching me in China, or in Vancouver or wherever he was.

“Last year, when he passed away, I started working harder,” says Louise. “I just had way more motivation to make him proud.”

Her hard work hasn’t been limited to the volleyball court. Louise chose to get involved in Light the Night, a nationwide fundraising event hosted by The Leukemia & Lymphoma Society of Canada. She found out about it while browsing Twitter.

“The premise is that you go in the evening and everyone walks with a lighted balloon,” Louise explains. “You carry red for people who are supporting, survivors carry white and you carry gold in memory.

“I thought it was a really cool idea and, obviously, the cause is really close to my heart.”

Louise’s mother, Lorraine, met her husband at Dal, where she played varsity volleyball. She currently lives in Aurora, Ont.

“I think it’s absolutely wonderful,” says Lorraine. “The Toronto event has already happened, but I’m definitely supporting (Louise) in her walk. Not only is it a great community thing to be involved in, but it has special meaning for her.”

Louise wasn’t sure her teammates would be as enthusiastic, but she was pleasantly surprised.

A group of roughly 20 fellow student athletes—representing Dal volleyball and track and field—will be taking part in Light the Night. The group is less than $500 away from their $2,000 fundraising goal.

Volleyball teammate Tarah-Lynn Truant will be part of that delegation, and has raised $350 so far.

“We got off on the right foot, talking to everyone we know,” says Truant, a third-year commerce student. “We wanted to give back, and this was a cause that was close to home for us.”

Light the Night will take place on Saturday, Oct. 20 at the Halifax Commons at 5 p.m. For Truant, there is plenty to look forward to.

“Having this experience with the team and seeing the entire community come together will definitely be a memory we’ll take with us,” she says.

And, although it helps, Louise doesn’t need a special day to remember her dad.

“There’s obviously not a day that goes by that I don’t think about him,” she says. “He was my biggest role model.”

Note: The original version of this article mistakenly identified the teams taking part in the event as volleyball and cross-country. The teams are in fact volleyball and track and field. The Gazette regrets this error.