The Dal duo educates people around the world about climate change

Caitlin Grady and Jasveen Brar’s passion for environmental initiatives and activism stems from their identity as Canadians.

“North America is a huge contributor to climate change,” says Grady. “We’re forcing people to suffer and adapt to global warming—and it’s all our fault. We don’t deal with the consequences, we let other people deal with them.”

“I’m from Medicine Hat, Alberta,” says Brar. “I live in the province known as the black eye of Canada. Growing up, I had such an un-environmentally conscious community. Knowing that there was a big problem and people didn’t care made me want to do something.”

Earlier this year Brar and Grady went to Merit360, an annual conference in New York that brings together 360 young leaders from around the world to talk about the United Nations Sustainable Development Goals.

“Our group was focused on climate action, and through that we developed a project with eighteen other people that we’re working to implement,” says Grady. “We want to launch a pilot project in Ghana next July. We’ll have a bus, with climate scientists, NGO representatives, the Red Cross.”

Their project is called the Climate Express.

“It’s a resiliency solution on wheels,” says Brar. “What we’re trying to do is bring in global leaders and changemakers to communities that are feeling the impacts of climate change.”

Education is of utmost importance, as many communities don’t understand the connection between climate change and what is happening within their communities.

“We’ve identified three communities we want to go to in Ghana who are affected by droughts as a result of climate change,” says Grady. “This will build resiliency in communities most vulnerable to climate change by connecting them with experts who can give them the resources to build a resiliency plan.”

“We want to work with the locals in the area,” says Brar. “This is something that can be applied to communities around the world, even in Canada.” 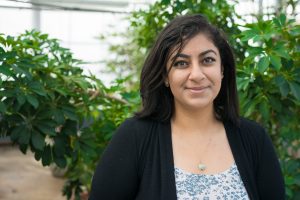 While Brar and Grady are both involved in The Climate Express and the Your Environment and Sustainability Society (YESS), each have participated in individual sustainability initiatives

This past summer Grady did an internship in Kenya, working with communities to help ensure that their income generating activities are sustainable.

“They ran community chicken hatcheries, but they weren’t very sustainable because winters in Kenya are getting colder due to climate change,” she says. “We had to develop strategic plans so that these chickens could survive and continue bringing income to the community.”

She is also a member of the DSU Sustainability Office.

Brar travelled to the Arctic this summer through a program called Students on Ice that runs expeditions to the South and North with the mandate of educating youth on what Brar describes as “the greatest classroom on Earth.” Brar references her 2014 trip to Antarctica with the same program as a turning point in her environmentalism.

“I realized I needed to do something more,” she says. “I started with changing my degree to ESS, just so I could learn more. To change the world you’ve got to know how everything works first.”

She also credits science fairs for her passion for the environment. She works as the director of the Halifax Science Fair, judging and mentoring students. Additionally, she is involved in Let’s Talk Science and works for Youth Science Canada.

Brar is recognized as a “Top 30 Under 30” in Alberta for her environmental work.

“It can be a bit of a depressing topic—it’s really overwhelming to talk about the fate of the world!” she says. “It is important to be optimistic. We are the first generation to feel the effects of climate change and the last generation to be able to do anything about it.”