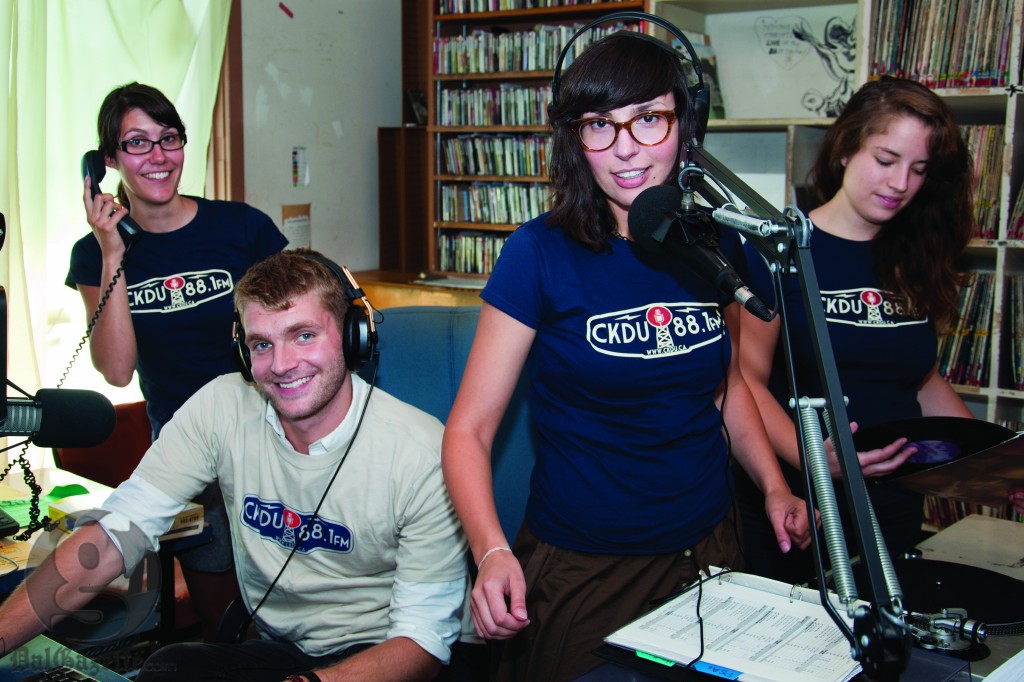 I was driving home last Wednesday in serious need of good tunes. I didn’t have any CDs, and all the usual radio stations were uninspiring. So I tuned into 88.1 CKDU, Halifax’s only community campus station. Last time I listened to CKDU they played Bollywood music and had a gentleman read people’s futures. This time, I caught the tail end of DJ Mindtrip’s Big City Beats, a trance and electronic show. And it was pure magic—exactly what I needed for the long journey out of the city.

Trance is not everyone’s cup of tea, but the beauty of CKDU is that there are currently 101 different programmers actively broadcasting over their airwaves, so you are bound to find at least one show you love. Megan Clark, who hosts a show called Why Folk, Why Not? Tuesday mornings, features banjos, washboards, spoons and maybe even jug band for country and bluegrass enthusiasts.

”One of the things that is so exciting about CKDU is how many amazing and different programs air every day,” says Clark. “CKDU is truly original in all sorts of ways.”

There are 10 different languages featured in CKDU’s programming, not to mention shows that represent a variety of different cultures from all over the world. For the politically-minded, CKDU offers shows like Democracy Now! or Third Wave Radio, which are alternatives to mainstream news.

CKDU is accessible both to listeners and to those who want to work behind the scenes, says station coordinator Gianna Lauren.

“People can come from any background, they don’t need a journalism background, and they can learn the [necessary] skills,” she says.

“People can walk through this door and feel like they have found an open space that is community oriented.”

As a student at Dalhousie, you’re automatically a member of CKDU.

“Students pay through the student levy, which we are extremely grateful for,” says Lauren. “We wouldn’t exist if it wasn’t for students.”

Students might fear the over-commitment of a radio show on top of school, work, and family—but Lauren says they needn’t worry.

“We offer quite a bit of flexibility for students who are busy and have a bunch of other things going on outside of their class schedule if someone only wants to have a show once a month or get involved without necessarily having show” says Lauren.

CKDU is a radio station for the Halifax, but it is also a Dalhousie student society. “The only way we can be more in tune with the student body is if we get more and more student broadcasters and volunteers, and we are always looking for more.” says Lauren.

CDKU must work hard to keep their station current with quality equipment. The annual funding drive is a way for the station to spread the word about its programs and raise money for facilities. The funding drive starts Sept. 22 and CKDU aims to raise $28,000 dollars for a new production studio.

“Radio stuff is expensive. The mixing board alone costs $20,000,” says Lauren. The money it takes to refurbish a radio station is well outside CKDU’s not-for-profit budget.

“$28,000 is not an arbitrary number,” says Lauren. “As a not-for-profit organization, we are not going to ask for more money than we need.”

CDKU will host 16 events as part of the drive in HRM, ranging from live music to panel discussions. Money raised goes directly to the station. Students on tight budgets may be wary of donating money, but Kat Shubaly, the funding drive coordinator, says it’s worth it.

“CKDU is your radio station, it is what you make it at the end of the day. $30 doesn’t seem to be too much when you realize you get 24 hours a day, 365 days a year of opportunity to do anything with this station. It is whatever you want it to be,” she says.

Considering the current state of radio in this country, it’s important to support independent broadcasting in order keep our communications as diverse as our communities.