Presenting academic papers can be a six-week working vacation

Recently, I presented papers at the Sixteenth Century Studies Society’s conference in Belgium, and the British Shakespeare Association’s (BSA) Conference in England. My working vacation lasted a wonderful four weeks, across six countries.

First, I presented my paper in Bruges, Belgium. Although most conferences take place in one building, this conference – more than 1000 speakers – took place in several historic hotels, allowing delegates to tour the city as they attended various sessions.

Beer, chocolate, and canal-side cafes are everywhere in Bruges, making it a delightful city in which to mingle work and leisure. As a bonus, the tourist board donated museum passes to all the conference presenters: a Dali exhibit, a lace-making demonstration, a dungeon, and a brewery, to name a few.

I then travelled to the tiny country of Luxembourg – I had wanted to go there ever since I spelled it incorrectly on a high school history test.

After the train trip, I needed to catch a bus up to the castle where I would stay. Unfortunately, the bus driver took me to the wrong castle. It was over 30°C, I was toting my large suitcase, there were no more buses that day, and the town had no taxis. I was in a bit of a panic. But I walked into a bar, the bartender called somebody and negotiated for someone from my castle to pick me up.

With much relief, I managed to get to the Château d’Urspelt and live in luxury for two glorious days. 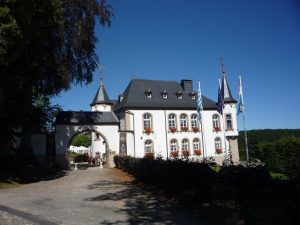 My next stop was Germany. I wanted to go there because my ancestors are German, but I couldn’t decide where to go. Eventually, I used the “close your eyes and point to a map” method.

In Frankfurt, the canal was lined with live theatre and musical venues, food trucks, and make-shift bars. I ate African food and drank local, apple wine while talking to a charismatic elderly man from U.S.A. and listening to Latino music.

In Düsseldorf, I was entertained by a series of outdoor choral performances and a gourmet street food festival. This experience culminated in a lively 50s-style dance with a feisty Italian vendor. 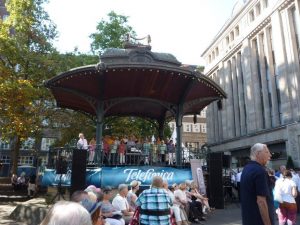 A choir performs in Dusseldorf, Germany. Photo by Shawna Guenther.

Holland was the next place I visited. Of course, Amsterdam is a popular destination. I rode the double-decker bus and canal boats around the city, walked the red light district, and passed the various marijuana cafes.

None of that really interested me, and it wasn’t really a good view of Holland. So, I took the train to Haarlem one day and walked around the charming historic city where there were windmills, Delft pottery, Dutch food (especially the cheese), and a slower pace than Amsterdam.

By this point, I was becoming a tired traveller, but I still had another conference to attend.

So, I flew to Nottingham to visit a friend.

The University of Nottingham campus is absolutely breathtaking, and is located near the ruins of the castle where the English Civil War is believed to have started. At the castle, ten pages of Leonardo da Vinci’s notebooks were on display at the castle.

The museum provided life-sized cut-outs of the Mona Lisa for people to take selfies as the iconic painting. Then, I travelled to Cave Castle in the town of Brough (pronounced ‘bruff’) before heading to Hull for the BSA conference.

Because 2016 is the 400th anniversary of Shakespeare’s death, the BSA conference theme was death, and the papers cheerily reflected all aspects of this theme.

I spoke on suicides of the Bard’s dramatic women.

One evening, four of us previous strangers dined at a Moroccan restaurant, sampling many traditional dishes accompanied by British lager. After the conference, a colleague and I drove south to Chester where we walked on an ancient Roman wall built in 26 A.D. where we saw the ruins of an amphitheatre.

Then, I boarded the plane in Manchester for my flight back to Canada, stopping for a layover in Reykjavik, Iceland. It is a curious thing to come in for a landing as you see thermal spas, ice, and chunks of lava rock scattered over the land.

Now that I am back in Canada, I am not looking forward to a long winter, but I will be back in Europe in January to attend conferences in Lyon, France and Northampton, U.K.