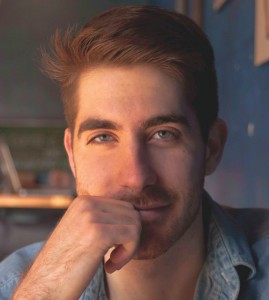 On a rainy Thursday evening in January, Johnny Martin and a few of his friends gather around a table at the Seahorse Tavern, sharing pitchers of beer in the dimly lit, and completely empty, bar. What might look like just another pre-Mellotones rendezvous is actually a well-deserved break from an exhausting afternoon photo shoot. Dark-haired and unshaven, Martin definitely looks the part of a brooding artist. Flanked by two sets of models, clad in only Martin’s tank tops and a pair of jeans, along with his faithful photographer and a few extras, Martin is in his element.

Martin is using the bar as a backdrop for photographing a set of images to complement his first clothing line. Coming out under the label he’s created, Amerigo Clothing, Martin’s vision is equal parts business and pleasure. Amerigo Clothing is named after Martin’s great-grandfather, an Italian ship designer from Livorno. The line of T-shirts and tanks he’s been busy single-handedly designing, marketing and curating for over a year will be released in just a few weeks under the label CHEAPER Collection.

But how did Martin get from point a: high-achieving Dalhousie economics student on the fast track to investment banking, to point b: first-time designer and entrepreneur? It’s a question even he doesn’t quite know how to answer.

“I guess I kind of stumbled into it,” he muses.

Growing up in Calgary with stints in both Russia and Egypt, Martin came to Halifax in 2008 to complete the foundation year programme (FYP) at King’s. “Anyone who knew me at King’s knew I liked clothing,” he says.

After FYP, he transferred into economics, but cut his studies short once he realized his interests lay elsewhere. “At a certain point I realized I couldn’t do something that I didn’t believe in,” he says.

Once he’d graduated with a 15-credit degree in economics, Martin started creating and designing an aesthetic for shirts: low-cut tanks with his own designs on them made “from scratch,” while taking a few classes at NSCAD to learn the basics. “I had to learn to make clothing,” he says.

While Martin says what he learned at NSCAD helped him, the lessons that mattered most were the ones he got outside the classroom. “I think it’s more important to surround yourself with like-minded individuals,” he says. “That way your peers are your judges, as opposed to one, overseeing teacher.”

When Martin was just starting out, he called up Dov Charney, CEO of American Apparel, to ask for some advice. “All he said was to ‘just keep hammering at it.’ And that’s what I’ve been doing.”

But for Martin, it’s always been about more than just the clothing. “When I was a kid I worked at a bookstore and I really loved the fantastical aspect of storytelling and really just the act of creation.”

Originally, Martin says he wanted to make movies. He says he still hopes to someday, “but I realized that movies require more capital than other artistic endeavours, and I decided to do clothing instead,” he says.

But on that rainy night in January, Martin was putting the finishing touches on a series of photos now being edited into a tableau. More than just advertising the shirts, Martin sees the tableau as a mini-movie—as something that tells a story in an artful way. He developed the story behind the tableau and the shirts at the same time, hoping to create “something that really reaches out and grabs the viewer.”

He says he’s not sure when it evolved into both, but Martin sees himself more as a producer than either an artist or an entrepreneur. “It’s just as much about the story and the dream itself—what’s behind it—as it is about the clothes. The shirts are just one way to express this artistic moment.”

The designs behind the shirts themselves came from a poem Martin wrote. He says the shirts feature fragments of the poem, and when you put the shirts together, you have the full poem and the full picture.

“Bite me/ Lick me/Kiss me deeper. Don’t worry, baby, I can afford it/These days love is cheaper,” reads the complete poem on one of his tanks. The tanks are all loose-fitting, soft black creations, delicately screen-printed. On the front is a stylized set of lips, and on the back is a scripted fragment of the poem.

“It tries to conjure up that feeling, that place you are at the time, that place of love,” he says.

The shirts and the tableau are just two aspects of a mood he’s trying to express, he says. “There are a lot of people doing shirts, and people have enough shirts. I wanted to make something special and unique to show how deep the artistic expression goes.”

Currently Martin is only producing tanks, but he’s got big hopes for his next collection and says he’s not short on ideas. But as of now, Martin’s keeping those to himself. All he’ll let slip is that he “wants to graduate to a more sophisticated form. I still want to use the paradigm of the story, and as that grows, who knows?” he says.

Michael Beedie, one of the actors in Martin’s narrative photo shoot, says he’s sure this is only the beginning. “He’s one of the most driven and passionate people I’ve ever met. He’s full of vision and ideas … And while they’re not necessarily always feasible, I think he’s one of those people who will succeed or will simply die trying,” Beedie says.

Martin says this past year has been a long, hard road for him, but “it’s all about the process.”

At the end of the day, he just wants to stay true to that kid who loved stories: “You want to be true not just to yourself, but to what you were when you were innocent, when the world was but a dream.”