Perched precariously on the Northeastern shore of mainland Prince Edward Island sits a small island shaped like a crab claw. For now.

The region has been home to the Mi’kmaq First Nations for over 10,000 years, and within the past 10 years, 4.3 hectares of this homeland has disappeared – and it’s not showing any signs of stopping. 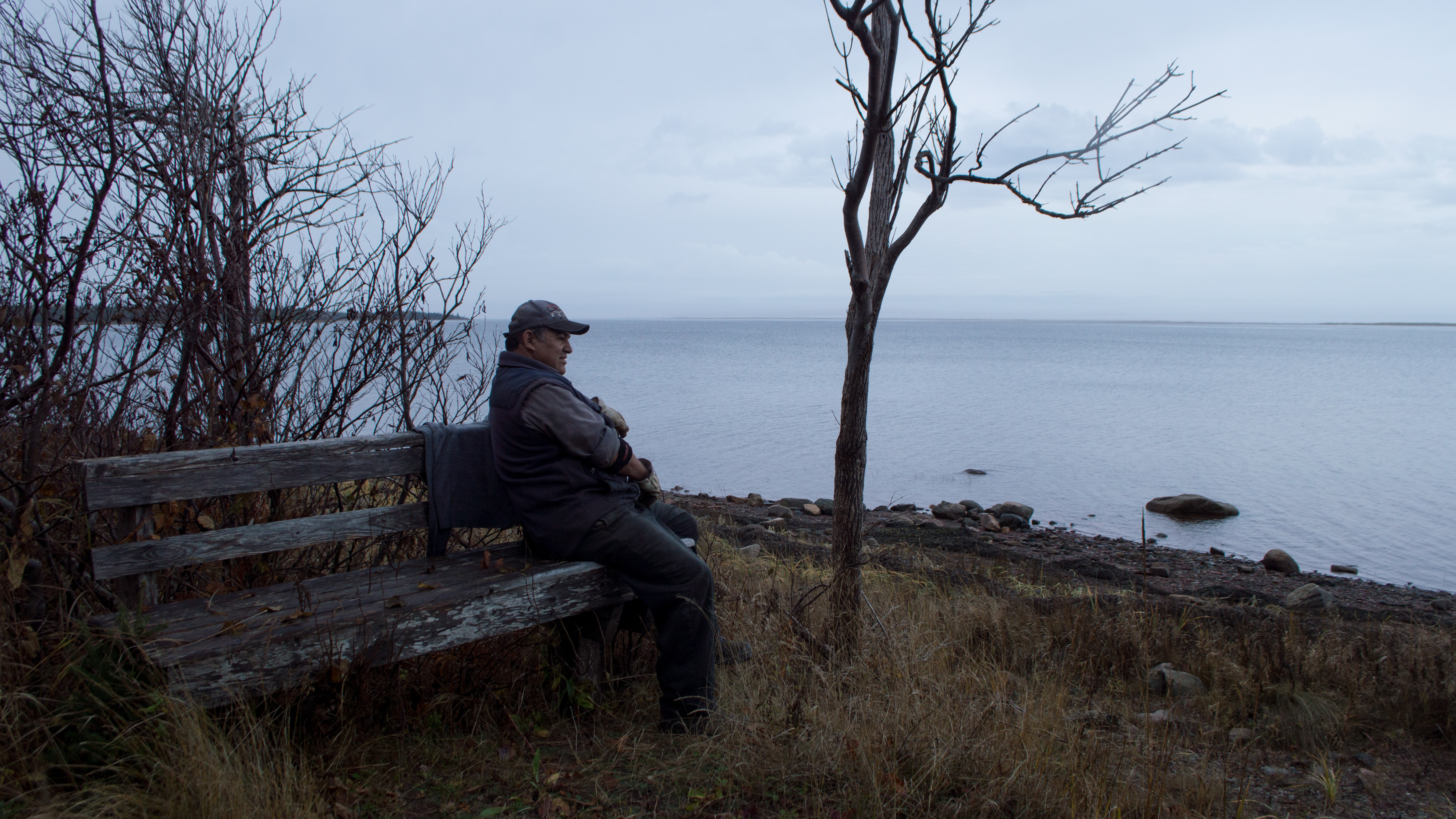 Angus Sark sits on a bench that once sat embedded deep in the forest on Lennox Island. He overlooks the “back shore” of the island, which lost almost four feet of land from hurricane Matthew in October 2016. He says he can remember a time when the rocks pictured half-submerged in the water were once in the side of the bluff where he now sat. 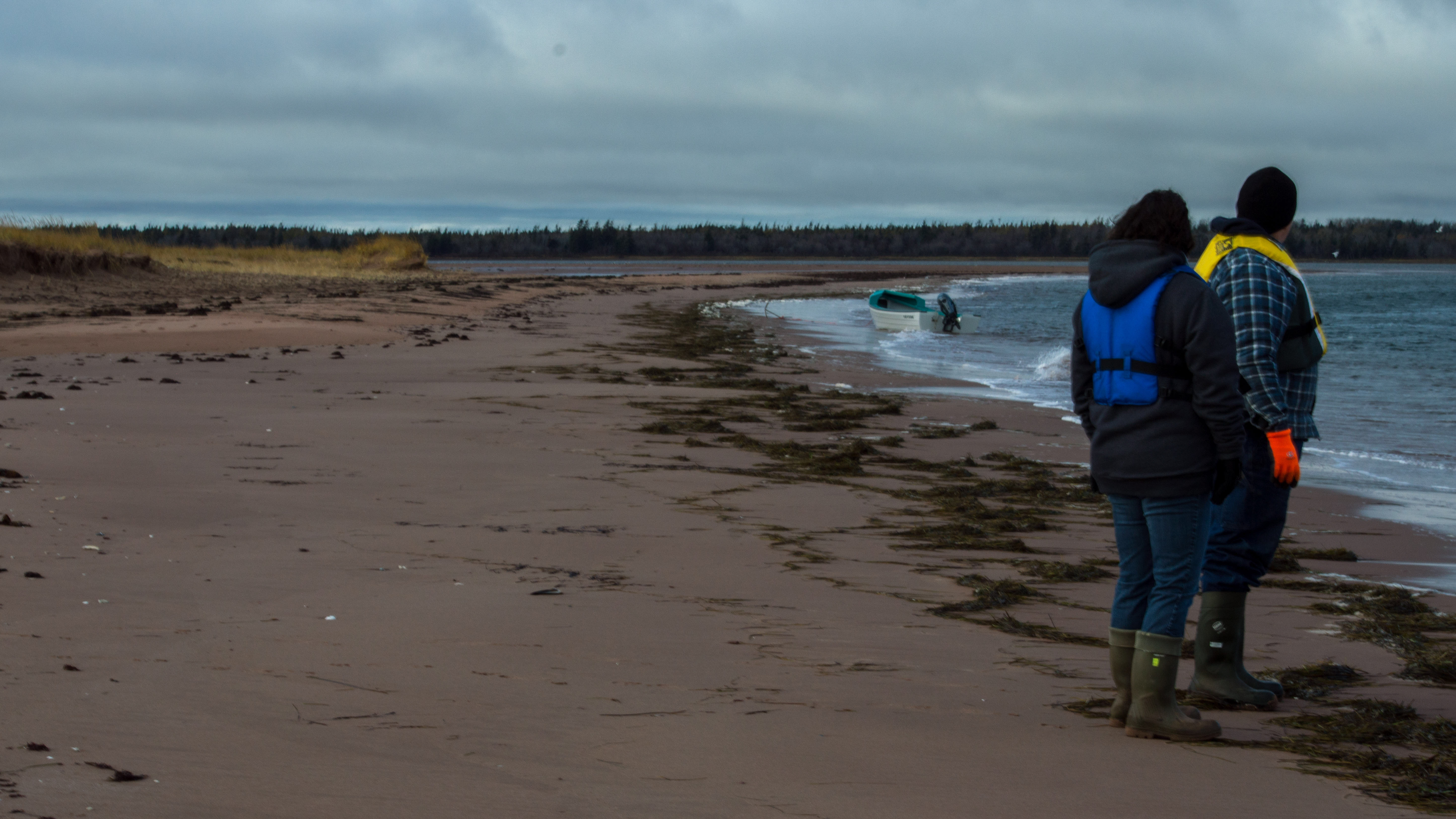 Lyndon Hardy and Brandi Coughlin walk along the shore of Hog Island. The island is part of a chain of long strips of sandbars with rolling hills that protect Lennox Island and Malpeque Bay from the powerful St. Lawrence Gulf in the Atlantic Ocean. A deep concave in the side of what used to be the highest peak on Hog Island show the havoc of storm surges in the area. If these sandhills breach, the effects could be devastating for what is left of Lennox Island.

Canada is a nation mother to three coasts, boasting over 24,000 kilometres of coastline. The stretches of shore give ample evidence to observe the effects of climate change that have already begun to show – and to predict what is yet to come.

Extremely warm winters recorded in the Arctic matched with record amounts of snow – 70 cms in some regions – and rain in the Maritimes. Although some coastal areas are protected from the weather, such as Lennox Island and the northern coast of mainland PEI, they still face slow and inevitable change.

Other areas are sometimes left little to fight with, but everything to fight for. 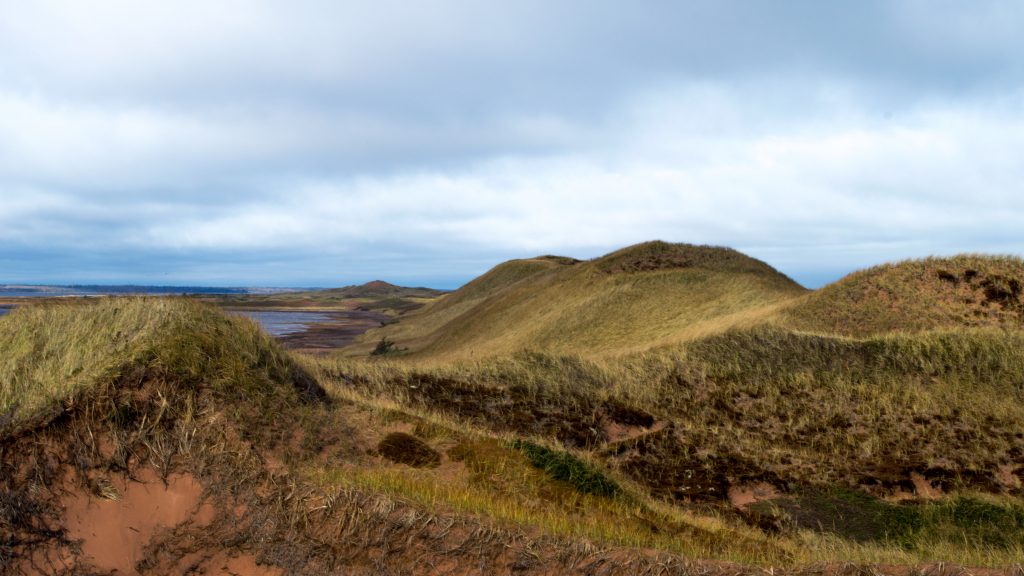 The sandhills of Hog Island provide the only little protection Lennox Island has from the Gulf of St. Lawrence.

Much like the Aboriginal Canadians spread across Canada, the people of Lennox Island are resilient, respectful, and share their stories of loss and determination as proof that throwing in the towel is something we don’t do.

Loss of this land is the loss of a home and identity for the people of Lennox Island. If forced to leave, they lose centuries of their history, of a way of life, and pieces of their culture to wash away with the shorelines. 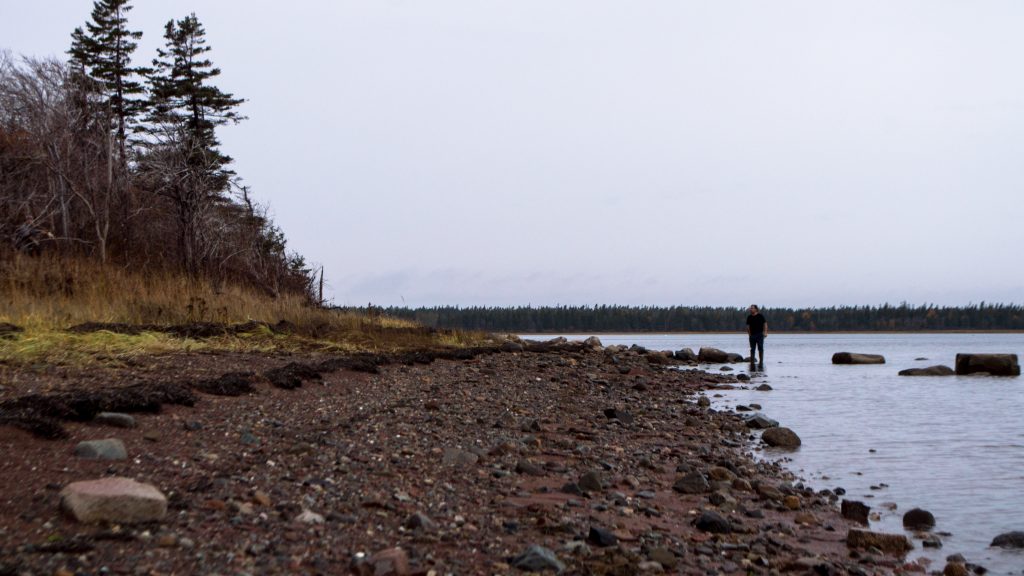 Cecil Banks stands on a rock he remembers sticking out of the side of the bank over a decade ago when he was a kid.

Most residents I spoke with during my two weekends on Lennox Island told me stories of connecting to their heritage on Lennox, and their intent to stay at home. The knowledge of the land, their burial grounds, the sacred grounds that carry history and a way of life will be lost, says Lennox Elder and drum-keeper, Gilbert Sark. 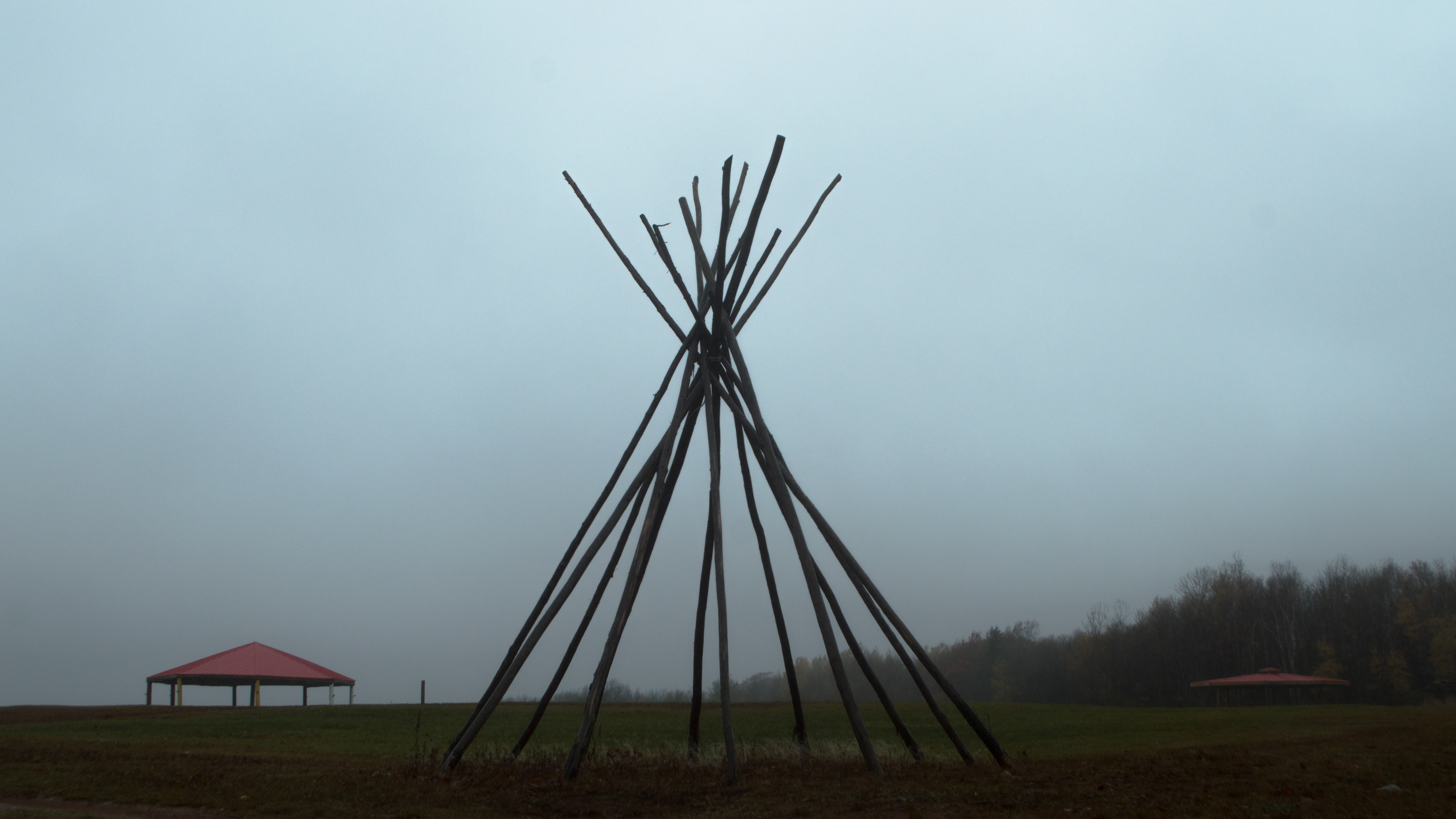 A wigwam structure stands tall among the Lennox Island powwow grounds. This land and the connection to the land for over 10,000 years is the beginning of the loss the Mi’kmaq of Lennox Island would experience from displacement.

The First Nations, Inuit and Métis of Canada have been subject to years of oppression since the colonization of Canada 150 years ago.  This history of Canada is polluted by the attempted (and almost successful) assimilation of indigenous peoples into “civilization.”

The Canadian Federal Government implemented a series of actions to meet this goal; creating the Gradual Civilization Act in 1857, encouraging Aboriginals to give up their status for monetary or land gain, and establishing a residential school system to purposefully separate Aboriginal children from their culture and families for successful indoctrination followed by the 60’s scoop.

This treatment of Aboriginals in Canada set a devastating precedent for years to come.

The impact of the unsuccessful campaign to un-indigenize Canadian Aboriginals has trickled through generations; the confusion of growing up away from their family structure, unable to speak their language, abused and raised to believe their culture was savage.

First Nations couldn’t relate to this world, but could no longer relate to the one they came from. A lost generation was born.

The devastation caused by the disruption of lifestyle and thrown into a world that was unknown has trickled down through generations of Canadian Aboriginals. Many reserves and land-claim territories still struggle with acquiring the right to self-determination, with Aboriginal peoples having to prove their status, and often left on the back burner of priorities; left with boil water advisories for years.

Aboriginal youth graduating at lower rates each year. The snow melting and ice “break-ups” occurring earlier and earlier, year by year, or simply given incentive to relocate.

Residents of Lennox Island First Nation Reserve are determined that the answer to pressing environmental concerns on First Nation communities are not to accept the offers of relocating to a “new” Lennox First Nation Reserve on the mainland with the shadows of colonialism lingering in the resolutions to disappearing indigenous land.

The Banks family, whom I stayed with during my visits to PEI, say Lennox is their home, they don’t want to move. This sentiment is shared among most Lennox Islanders. 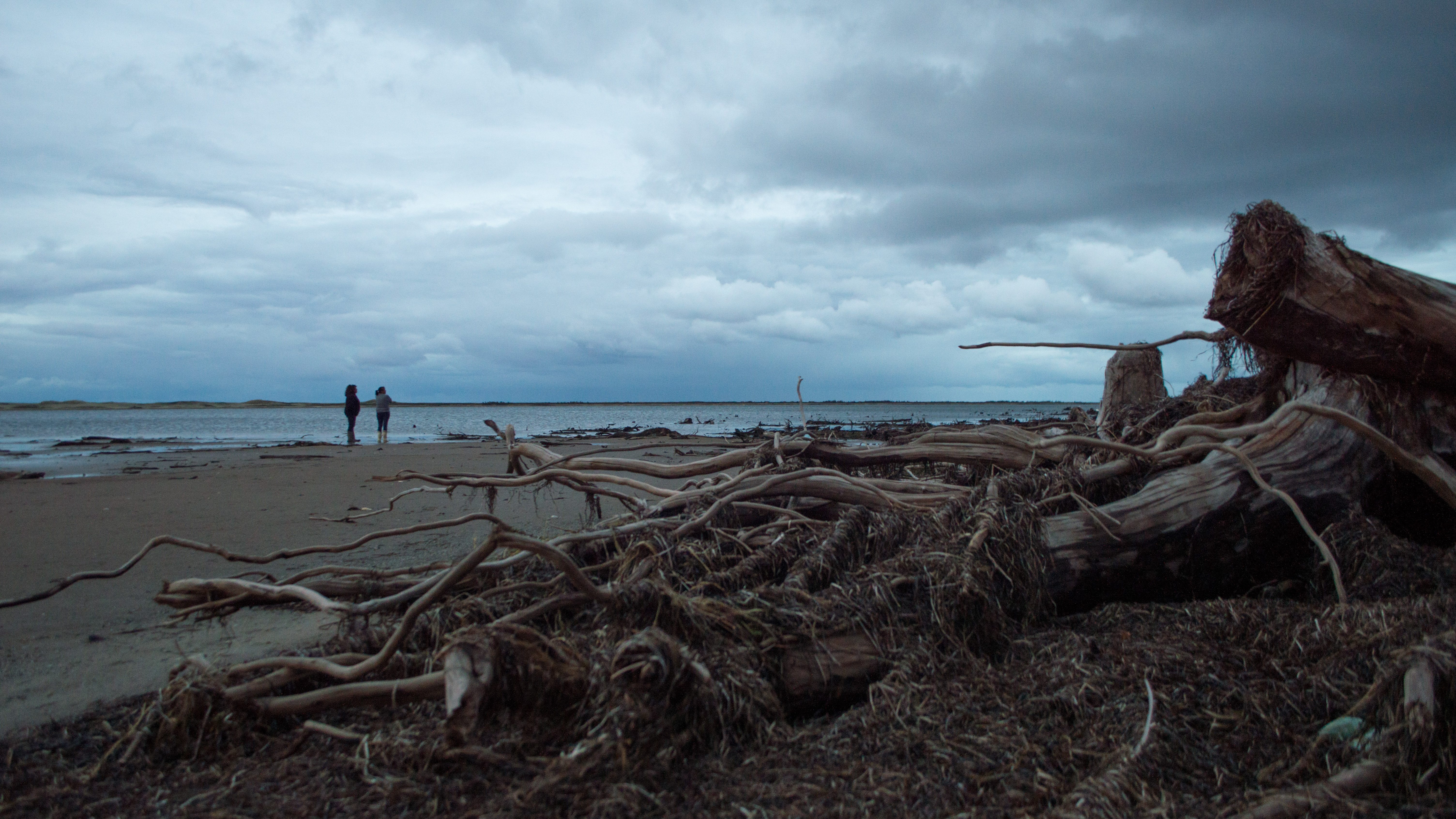 Janet Banks and her sister remember this shore as it was when they were little girls – when it was a forest and peat bog until being chopped down and years of weather eroded this section of Lennox Island’s back shore. At high-tide, calm waters submerge the graveyard of the long-ago forest.

Indigenous communities like Lennox sprinkle the coastal regions of Canada like the stars do the night sky – each unique, exuberant, and breathtakingly alive.

They share their culture proudly; my Haida Gwaii relatives on the Pacific Northwest receive their button blankets. The graduates in my community in the  Northwest Territories proudly tout their graduation stoles made of moose hide and intricate hand-beaded designs dancing down and up the V-pattern hanging off of their shoulders.

I watch my Mi’kmaq friends’ communities’ form pow-wows and invite everyone in the public to come and experience their culture; including potlucks, drumming, singing, dancing and learning of the Mi’kmaw history in Nova Scotia. 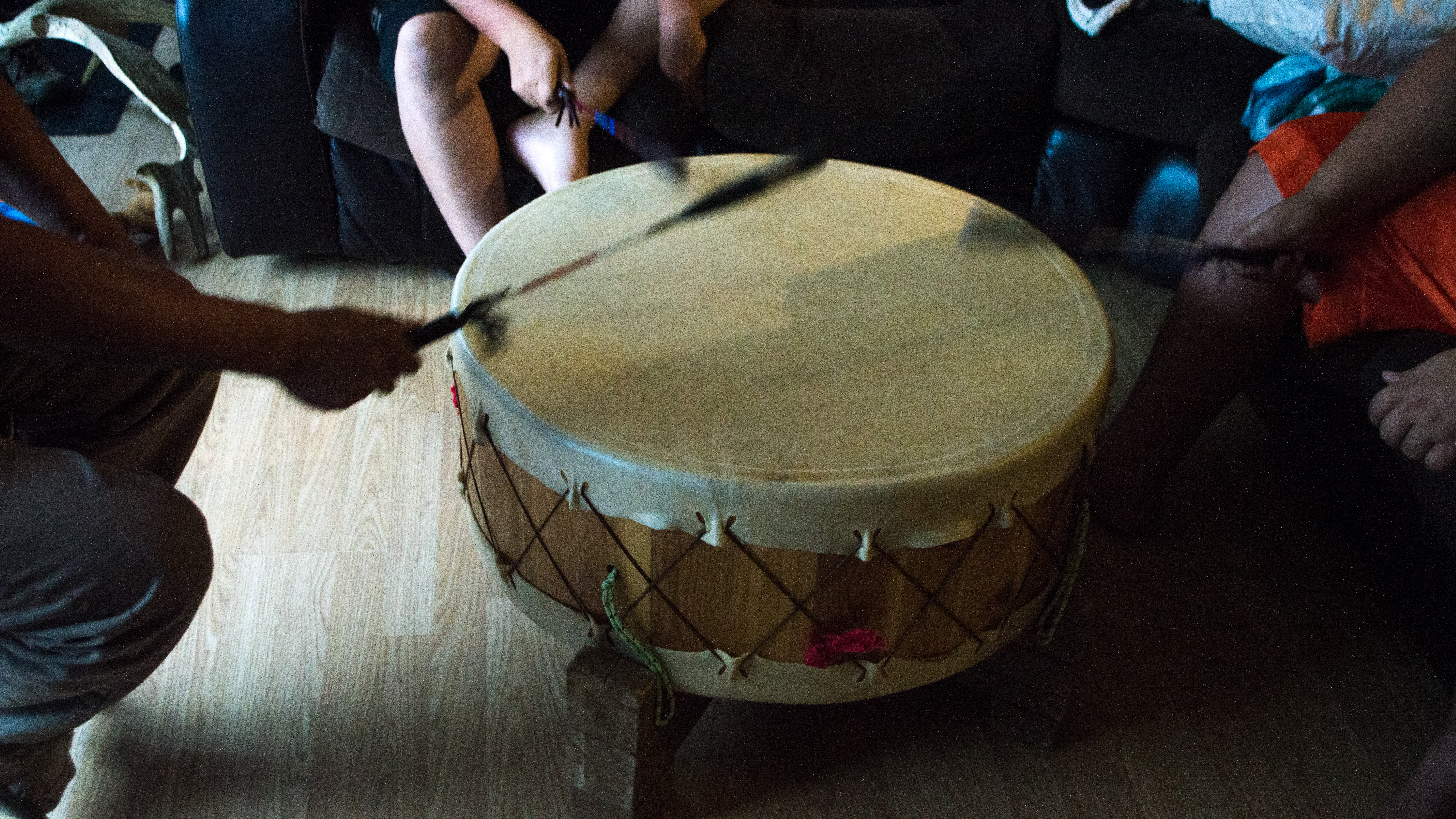 Deeply involved in Mi’kmaq traditions on the island, Hey Cuzzins, a local drum-group created by Lennox youth practice in the home of drum-keeper, maker and Elder, Gilbert Sark.

70 per cent of Canada’s population lives within its coastal regions. Along with the rich heritage and the invaluable historical ties many indigenous peoples of Canada have to the land, much of our economy is driven by coastal activities; offshore oil drilling activity, major shipping ports, fishing industries, etc.

Reported in Canada’s Marine Coasts in a Changing Climate is was reported that the “changing climate is increasingly affecting the rate and nature of change along Canada’s highly dynamic coasts, with widespread impacts on natural and human systems.” 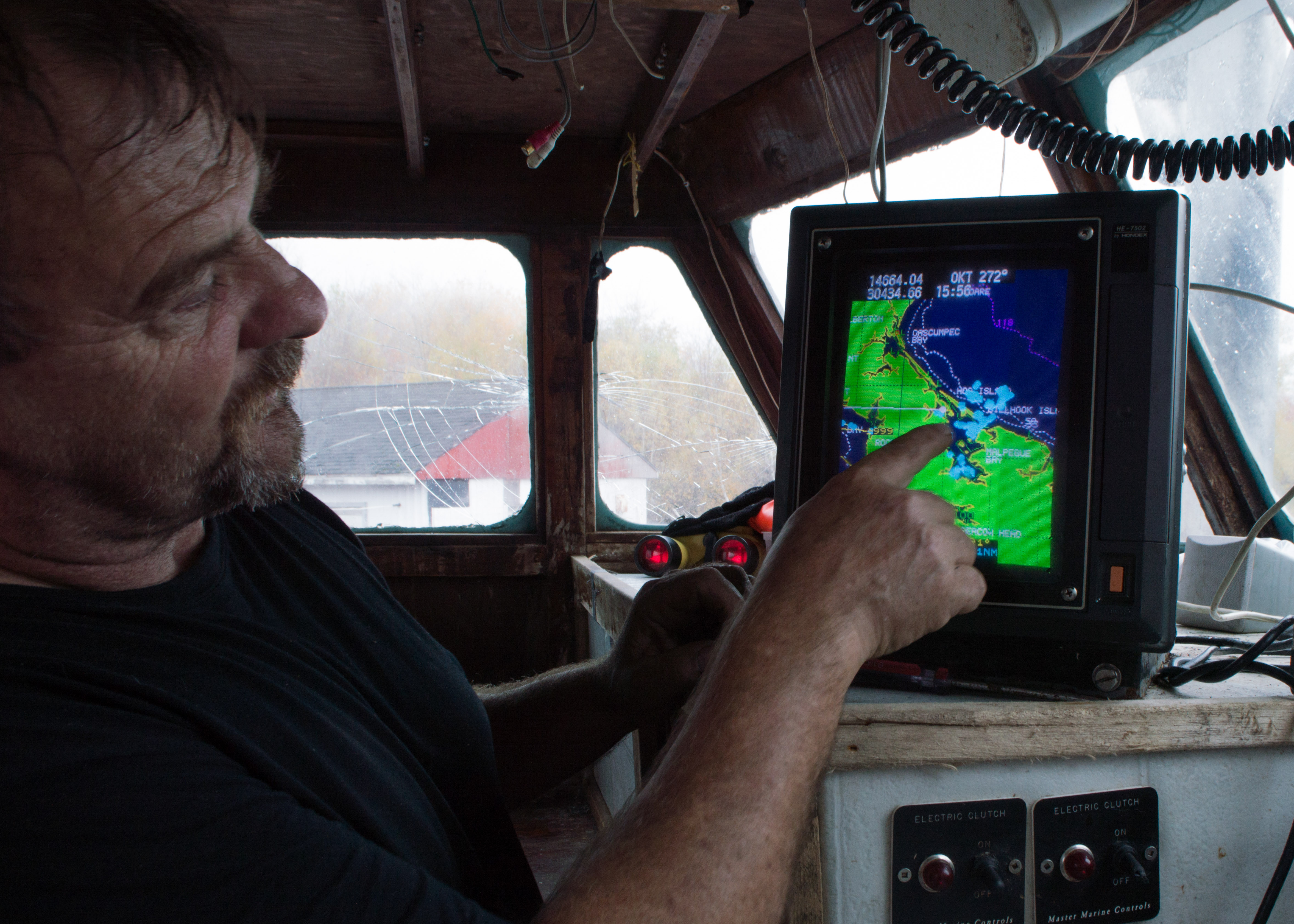 Cecil Banks shows blue points on a marine plotter in his fishing boat that show the “good spots” for trapping lobsters. This year, the lobster aren’t where they can usually be found but show up in areas where they wouldn’t normally be. The underwater landscape changes as drastically as above the water, affecting the lobster industry that Lennox depends on for food and income.

Canada is a coast-to-coast-to-coast country, that third ‘-to-coast’ often left off the end of the phrase – and out-of-sight is out-of-mind.

In December of 2015, Prime Minister Justin Trudeau addressed the Assembly of First Nations Special Chiefs Assembly and said, “… no relationship is more important to me and to Canada than the one with First Nations, the Métis Nation, and Inuit.”

On March 13 of this year, Lennox Island First Nation received $1.8 million for infrastructure and comprehensive community planning, including housing development and renovations, and supporting bridge repairs and island maintenance – like making sure it doesn’t wash away.