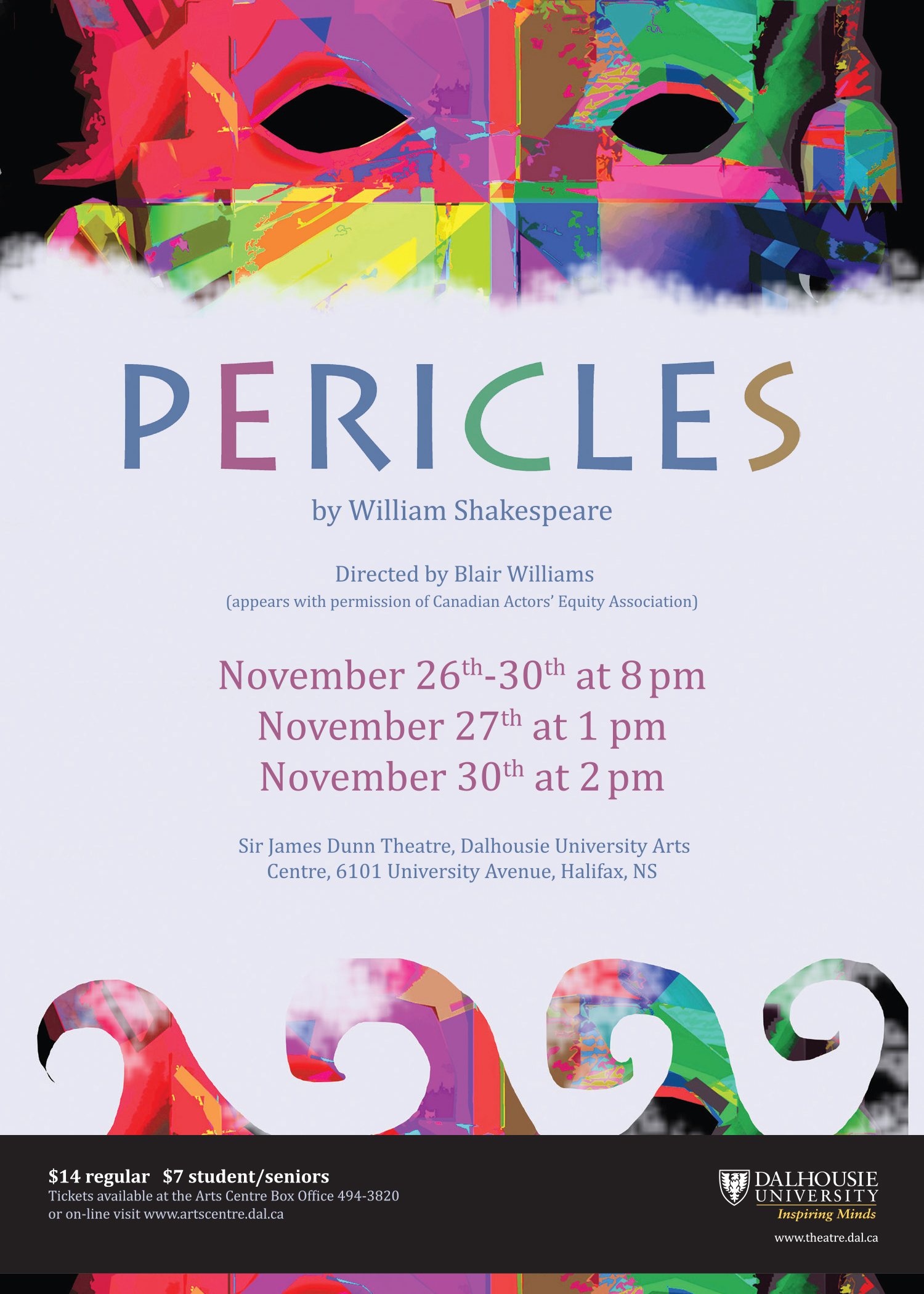 Dalhousie’s theater department will present Pericles,  its second production of the 2013-2014 season, on Wednesday, Nov. 26.

Pericles is a  magical adaptation of Ancient Greece, telling the epic tale of Prince Pericles’ journey across the Mediterranean Sea as he finds love and yearns to become a king. Pericles must overcome many obstacles such as storms, pirates, tyrant kings and tournaments. He loses his wealth, family and will to live as his daughter Marina tries to find her way back to him and reunite the family. Ultimately, Pericles is a tale of suffering and resolution.

“The character of Pericles is a great guy, who is innocent and goes through a journey where he learns more about the world and himself. He is honest and honorable, and this virtue is something that serves him well in the play,” says Jackson Forlow, who plays the title character.

“In almost every scene he starts in one state and by the end is in a very different one. So acting-wise, it is a lot of variety and challenge.”

Pericles will mark Blair Williams’s directing debut at Dalhousie. He has directed plays such as The President at the Shaw Festival, The Play’s the Thing at The Segal Centre in Montreal and Rope at the Vertigo Theatre in Calgary.

“It’s a huge, sprawling play that covers many geographical locations and is a psychological mountain climb for the characters, especially Pericles. The sprawling nature presents a challenge; you want to make sure each culture Pericles visits is different from the last culture he was in,” says Williams. “I’ve acted in Shakespeare plays before, and I wanted to take the opportunity to challenge myself and challenge [the actors].”

While credited as a Shakespearean play, the first act of Pericles was written by George Wilkins, a contemporary of William Shakespeare, before Shakespeare took over and finished what Wilkins had started. Despite this patchwork authorship, Pericles became a successful travel play, a romantic adventure that appealed to the masses.

Rehearsals have gone well, with the cast in high gear as opening night approaches. The excitement of doing a Shakespearean play is contagious, but what they are really looking forward to is using the poetic language to express the characters and their emotions.

“We had to be specific with what we were saying with every word. The beauty is found with the minimalism of Shakespeare, people saying the word to emote,” says Hillary Adams, who plays the Princess Thaisa. “It has been an amazing adventure and challenge for myself and my classmates, to be able to work with Shakespeare and Blair.”