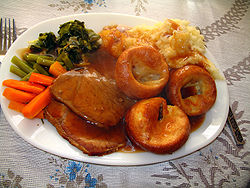 Or just impress them with your holiday cooking prowess

A common tradition around the holidays is getting family and friends together for a big fancy meal. Now that you’re out on your own and functioning as an independent adult (more or less), you may have decided that you want to cement this status by hosting a holiday meal. The problem? You don’t know how to cook.

The contents of this holiday meal vary widely by culture, but in our household, the fanciest meal was the Sunday Roast. While a large meal like this may look intimidating to a rookie chef, it’s actually not that hard. Getting the timing right is a bit of an art and definitely takes some practice, but the actual recipes are quite straightforward. Until recently, I was the type of person who couldn’t even make boiled eggs properly, so you can trust me on this one. My cooking skills have improved significantly since then, but this was one of the first “proper” meals I learned how to make–so don’t be intimidated!

For safety reasons, I’d recommend something like beef for your first-ever attempt at a roast. It’s a lot harder to get food poisoning from beef than it is from say, chicken. So, without further ado, a basic Sunday Roast for the absolute beginner:

A 3lb outside round roast is an easy, affordable place to start. This will feed around 4 people–you’ll have to increase the size if you’ve got a larger crowd. The instructions for this could not be simpler. Preheat your oven to 300 degrees F. Take the thawed, ideally room temperature roast, put it fatty side up in a roasting pan, and sprinkle or rub any seasonings you may want over the roast (you don’t need to add any, I usually just sprinkle a bit of salt and pepper over mine). If the roast is tied up in string, leave this on. Many recipes will tell you to put your roast on a wire rack in the roasting pan. This is good if you have one, but I don’t, and my roasts always turn out fine, so don’t panic if you just have a plain old pan. When the oven is preheated, put the roast in on a middle rack, and let it cook. At 300 degrees, you’ll want to allow about 20 minutes per pound for very rare beef– so in this case, the 3lb roast took about an hour to cook. You’ll need to increase the time if you want it well done, and it’s really best to have a meat thermometer, which will tell you how “done” your roast is. They’re cheap, really useful, and especially important if you’re cooking something like chicken, where you don’t want to chance possible undercooking.

Now, while your roast is cooking, you can prepare your veggies. If you’re going to do potatoes, it’s easiest to slice them into bite sized chunks (skins on), toss them in a bit of olive oil and your favourite herbs (rosemary is good) and then just throw them in with the roast for the last 30-40 minutes that they’re cooking (they can go right in the roast pan, or in their own). For demonstration purposes, we’re going to assume the other veggies you plan to use are corn, broccoli and carrots. Frozen corn literally takes about two minutes. Boil a cup of water, pour in two cups of corn, bring back to a boil, and you’re done. You’ll want to do this right before you’re ready to serve the rest of the food. We’re also going to assume the carrots and broccoli are fresh, in which case it’s simply a matter of slicing them up and putting them in a steamer (a pot with holes in the bottom that sits on top of another pot full of water which you then boil– for the true rookies out there). If you don’t have a steamer, you can put the veggies in a pot, cover them with water and bring it to a boil. They’ll be slightly less crisp, but still good. You don’t want to turn this on yet, as it doesn’t take long to cook.

Next is the Yorkshire puddings. The recipe for Yorkies is simple, though the execution sometimes takes a bit of practice to get right. To make the batter, simply mix 1 cup of milk, 1 cup of flour, a dash of salt, and 2 eggs with a whisk until smooth. Set this aside and let it warm up to room temperature (it should be about there by the time the roast comes out of the oven).

Now you wait until your roast is cooked! Once it comes out of the oven, immediately boost the oven temperature up to 400 degrees F for the Yorkshire puddings. Also, don’t carve the roast until it’s ready to go to the table, as it will get cold. Take out a muffin tin and pour a tiny bit of cooking oil into the bottom of each cup (it should be just enough to cover the bottom of the cup). Once the oven is preheated, put the muffin tin with the oil in for just a moment to make the oil hot. This is key, so don’t skip this step. Take it back out and distribute your Yorkie batter evenly into the 12 cups. Put it back in the oven and cook for 25 minutes. You might want to put a pan under the muffin tins as the oil may spill over the edge and make a mess of your oven. You also might want to open a window or turn on the hood fan (if you have one, which I don’t) because these can sometimes get a tiny bit smoky. Also, try to avoid opening the oven door while these are cooking, as they will lose their fluffiness if you do. Let these cook and move on to your veggies.

When the Yorkies have about 10 minutes left in the oven, put your steamer on the stove and turn it on to boil the water. You can also boil the water for your corn at this point. Once the water is boiling in both, let your steaming veggies sit at a rolling boil in one for a couple of minutes (the length is determined by how crispy you like them) and pour your corn into the other pot of boiling water. Once the corn has reached a boil again, take both off the heat. Pour the veggies into serving dishes (and drain any excess water from the corn), and at this point, your Yorkies should be just about ready to come out of the oven. Look through the oven window to be sure they’re done before you take them out; they should have a nice golden colour to them. Take them out and remove them from the pan (don’t burn yourself on the hot oil!).

And there you go, you did it! Next week, I’ll take you step-by-step through the process of making a pie, from scratch, so you can have dessert with your dinner.