The voice on the page

Corey Mombourquette is under the light at The Bus Stop Theatre.

“This next reader is probably my favourite local poet,” he says, and pauses. “Is that too grand of a statement?” 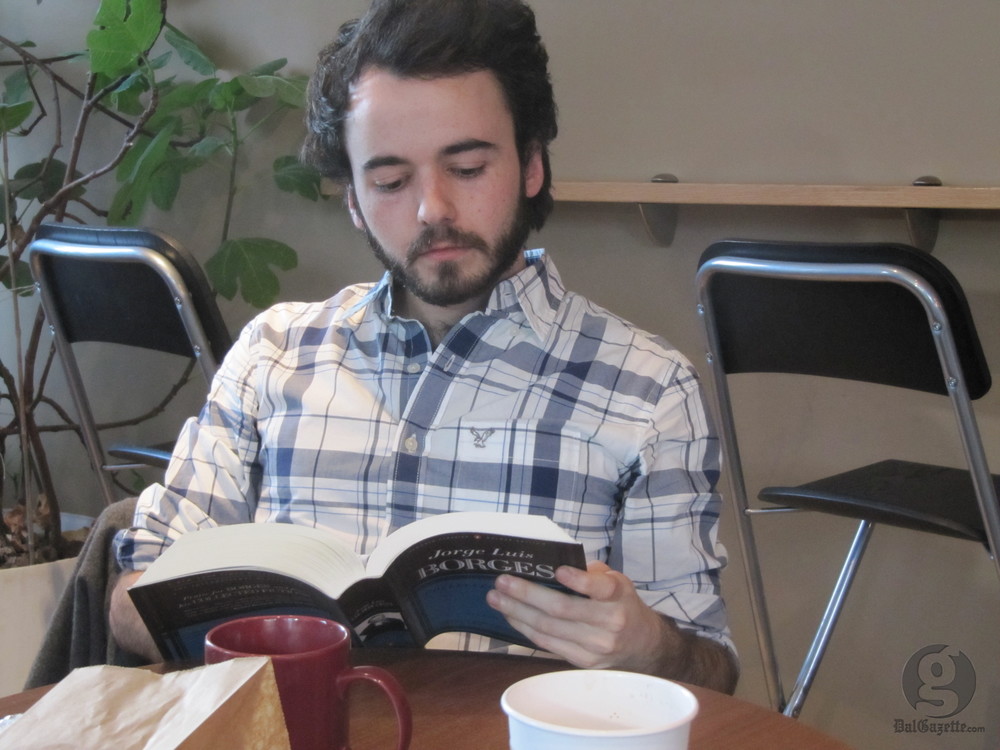 The rowdy right side of the crowd doesn’t think so, and he leans into the microphone to welcome Andrew Patterson, a local poet who has been writing from a cabin in the woods for some months. Mombourquette, who has admitted to having imbibed a little whisky, disappears backstage as Patterson responds to the compliment with a grin.

“A drunk man always speaks from a sober heart,” he says. Patterson pulls a poem printed on a single page and begins to read while local artist Neil Molloy slurs wide swaths of red paint across a canvas for a live painting in the other corner.

This is the Lilah Kemp reading series, a monthly gathering where local writers read their stuff, and it started with five people in a living room in 2010.

Mombourquette was a newly single 20-something living on the outskirts of Halifax when he decided he wanted to be a writer. But work on the thinly veiled autobiography of his first science fiction novel left him feeling isolated.

“That time was lot of bad things happening all at once: I got out of a bad relationship, I was doing too many drugs—it was just a bad year,” he says. But after a friend recommended the now-defunct Allan Street reading series, Mombourquette took to the chance to read his work publicly.

“It was such a cool atmosphere,” he says of the series hosted by Jenner Berger. People crammed into the apartment, sipping beers on the floor with laughter subsiding to a reverent hush when friends stood to read.

“[The first time I read] it was terrifying, but still to this day it was the best public reading I’ve ever done. People laughed at all the right spots and seemed to dig my ideas,” Mombourquette says. The compliments from published authors encouraged him to keep writing, but when the series ended, someone had to step up to fill the vacancy.

Mombourquette gave it a name: “Lilah Kemp is a character from a Timothy Findley novel. He’s a schizophrenic librarian who, when he reads books, characters come to life and interact with him. I chose the name because when you read something out loud it adds another layer of life to it,” he says.

As the series took off, Corey added different elements, like themes and musical guests, and became slowly comfortable in his role of MC.

“I was so nervous at the first one I did, I was shaking. It was a good place to start public speaking: cozy, slightly awkward,” he says. The host encourages unpublished writers to read alongside professional authors at the series.

Patterson, the poet, found affirmation in the events. “I think with the birth of this reading series came the sense that there is literary culture in Halifax on an accessible level for totally un-established readers like myself. Being involved with it gives one the sense that jumping into the next wrung of the writing world is possible,”

Chris Benjamin, the environmental columnist for The Coast, summed up his thoughts in an email:

“The art of writing can be so isolating, and the act of reading even published work publicly is a frightening risk. Lilah Kemp has given me a raucous, eager and warm crowd every time I’ve read there … By creating that space, Corey has shown that literature is not just stuffy high culture, but something that can bring people together and really connect them. And really what’s more valuable than that?”

Mombourquette thinks the series will go on hiatus after this season wraps up in June. “I don’t want to say that it’s ending, that these are the last ones, but it’s a good possibility, ” he says. But he encourages others to pick up the torch.

“I hope that people find inspiration in what I’ve done, in the same way that I found inspiration in Allan Street. Having an experience like that—where you do hit rock bottom, but then twisting it and using your energy and putting into something positive—that’s fucking great,” he says.

“Even if you’re a bad writer keep writing. Maybe don’t rely on it as a career; have a backup plan,” he laughs.

The Lilah Kemp Reading Series Anthology will be a self-published e-book released this summer with previously unpublished works from Maritime authors such as Ben Stephenson, Carol Bruneau, Andrew Patterson and Chris Benjamin.

Andrew Mills was Arts Editor of the Gazette for Volume 145.