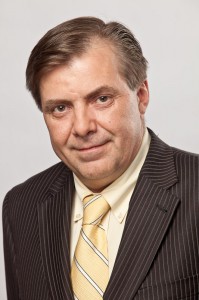 Alumni Spotlight is a series of interviews conducted with alumni by the Dalhousie Alumni Association.

Why did you decide to attend Dal?

SS: After spending four years in the Canadian Navy, I realized what I wanted to do. I already knew the school and area. I felt going to Dal was a great option.

Where did you live while you were at Dal?

SS: I lived off-campus in an apartment down south almost across from Fenwick. Then I moved to 1770 Robie Street in my Fraternity House – Phi Kappa Phi.

Where could you be found most often on campus while you were at Dal?

SS: Most often you could find me in the PUB at the SUB, especially during the wings and drinks specials!

Favourite place to study while at Dal?

What was your biggest distraction while you were at Dal?

SS: Halifax Night Life – there was always something to do. The Palace was my all-time favourite.

What was your favourite cafeteria food on campus?

SS: The chicken wings at the Pub – especially when they were on special.

Did you have a nickname at Dal?

SS: Because my name is Stuart, I went by Stew, but then my frat brothers gave me the nickname PID as in StuPid!

What is your favourite Dalhousie memory?

SS: Oh there are so many memories – but if I have to go with just one, I would say that volunteering to help out with Frosh week and being a leader for two years is one of my favourite memories. It was fun bringing students in and getting acclimatized – I’m still friends with some of those students today.

How did your Dal experience prepare you for your current role?

SS: It was great experience learning about the diversity of thought and culture.

What do you see as the best thing about being a Dal alum?

SS: The alumni association. I must say receiving the monthly newsletter allows me to keep in touch with the university and get updated about fellow alumni regarding the impact they are making in the world. It brings a sense of pride and accomplishment.

Do you have any words of wisdom for current Dal students – something you wish you had known when you were a student?

SS: Time management is a skill you will need to learn sooner than later. So much is going on around campus and you want to remain focused and not get caught up and distract yourself from completing your studies.