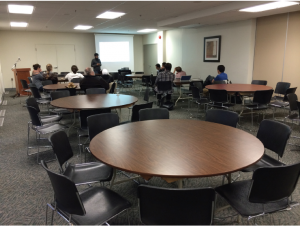 The DSU financial town had a total turnout of 12. (Photo by Jesse Ward)

The Dalhousie Student Union (DSU) announced at its financial town hall last week that it has a $11,151 budget deficit.

“An $11,000 deficit is not that much. I have confidence that I want to balance this budget,” said Rahman at the Sept. 25 town hall.

“The budget is being made in a conservative manner and our operations are not making a great amount of money, but are still doing well. So we are on the right track.”

Accommodating the deficit will only be possible if the DSU cuts down on expenses. Funds going towards advocacy groups are one of the major expenses in this year’s budget.

“When the budget was made in March, there was confusion about whether or not the DSU will be part of SNS and CASA,” Rahman said. “That’s why the number went up.”

Since the DSU is not a CASA member anymore, it plans to use part of that money for a new staff position in the advocacy office.

Another source of expenses is full-time and executive wages. The six per cent increase in this area is a result of the DSU policy to increase staff salary five per cent each year.

“With some people working at the DSU for 15 years, the increase accumulates,” Rahman said

. In response to students’ requests, Rahman says the DSU is considering improving its budget transparency by posting departmental budgets, including salaries, if there are no regulations against such an action. The board of operations will also be reviewing the staff salary structure.

According to Rahman, the revenues in this year’s budget are the same as last year, despite changes in revenue structure.

The DSU no longer receives money from Aramark since it did not renew their contract. Chartwells became the food provider in 2012. Rahman said this change is a price that must be paid for more choices and control over food-providing operations.

However, the DSU is reviewing its contract with Chartwells, and is also considering a self-operations food model for the near future.

Without money from Aramark or Dal (the university usually provides funding for some establishments on campus, but not this year) the DSU is mostly dependent on students for funding right now.

The student levy supports not only the operations budget, which funds things like the Grawood, but levied societies and projects, such as Tiger Patrol. The DSU decides the sum given to these services based on student satisfaction.

Rahman says a long-term goal for the DSU is to increase their funding from outside parties to decrease the student levy. Next year’s budget also improves opportunities personal and society grants.

For example, students can apply for the personal grant ($100 per year), which allows them to attend conferences, workshops, and other events that help them in their academic and extra-curricular activities.

The DSU also introduced the O-Week bursary this year, giving full bursaries to 11 students and partial bursaries to seven. The DSU is also discussing the emergency bursary program. The DSU is now reaching out to students for feedback and suggestions.

“My next goal when making the budget for the winter is to concentrate on working in focus groups with different students and societies,” says Rahman. “And there will be a town hall where students can give their opinions about the budget.”