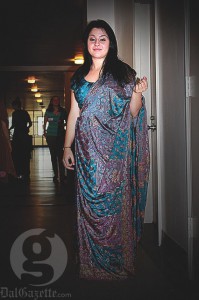 The International Development Education and Awareness Society (IDEAS) at Dalhousie is putting culture behind fashion. From Indian saris to Afro-peruvian dance outfits to Japanese Kimonos, the IDEAS fashion show will bring an entirely new dimension to the catwalk.

The society is organizing a fashion show that uses clothes from six continents. The event is called Fashion without Borders, and is being organized by IDEAS external co-ordinator, Andrea Landriault.

Landriault got the idea to put together a cultural fashion show when she was working with international students at the University of Alberta.

“I thought it would be a neat thing to do. It’s kind of been playing in the back of my mind for a few years,” says Landriault.

Landriault brought the idea with her when she transferred to Dal last year. She says this will be Dal’s first Fashion without Borders event and it has already brought a host of challenges with it.

“Getting people going sometimes has been a little hard because people have concerns … You end up sending pages of documents saying this is our treatment protocol for the clothes, this is the mandate of the event, this is all the people involved. You end up sending these huge packages of information that they don’t read because it looks so big,” says Landriault.

However, after emailing almost every committee and organization affiliated with Dalhousie, Landriault says people pulled through.

Her networking resulted in multiple outfits from Europe, Asia, the Middle East, Latin and Central America, and North America.

“International development pairs so well with everything. It helps to know a lot of people in the Halifax and Dal communities,” says Landriault.

She is expecting hundreds of people to attend the event.

Paige Smith is a second-year theatre student at Dal and a volunteer on behalf of Invisible Children. She is one of 28 models in the fashion show.

Her involvement in the event started at the fitting session Nov. 5, where costume co-ordinators organized the model’s outfits.

Smith says it will be fun to see what different cultures wear.

“I hope to get information out about the different cultures, and about our society, and everybody’s society, to raise awareness that we’re all out there and you can join or you can help out by coming to it,” says Smith.

Event-goers have the option of donating the proceeds from their ticket to one of four charities: Amnesty International, which supports issues of global justice; Invisible Children, a protection and awareness campaign for child soldiers;

Giving Voice to Hope, a social capital project for refugee musicians of Buduburam; or World University Service of Canada, which allows refugees to obtain post-secondary education in Canada.

Fashion without Borders will be taking place on Nov. 19 in the Grawood from 7 to 10 p.m.