WARNING: Graphic and vulgar language used in this article and photos

The Killam Memorial Library provides services used by a huge amount of Dalhousie students, faculty and staff, as well as the community at large. With over a million print books in circulation, a confrontation with the Killam ‘stacks’ can be intimidating. Where should you start reading?

If you begin with the library walls, you might have some questions.

While some desks, walls and bathrooms of the third and fourth floors are virtually untouched by graffiti, others are saturated with it—the content ranging from uplifting to hateful.

The Dalhousie Gazette inadvertently started a complaint process about the graffiti with Dalhousie Security Services when questioning them.

“Up until your comment, we had never had a report about it,” says Jacob MacIsaac, community security coordinator with security services, “which is crazy.”

MacIsaac says that after he found out about the graffiti, he spent a couple hours in the Killam, poring over the workstations and stacks on the third and fourth floors.

“Going up there was completely overwhelming, today,” says MacIsaac, “because I thought: the only way you can do this is rip out all of these desks, and literally start with a blank slate.”

While the second floor’s workstations are equipped with newer tables, the third and fourth floors have had some of the same wooden desks for years – MacIsaac says the graffiti may be at least 25 years in the making. 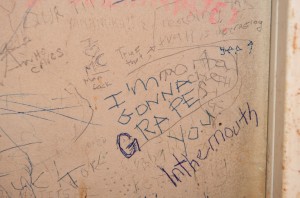 MacIsaac says people will always doodle in libraries, and that 95 per cent of the graffiti he saw was “bubblegum graffiti”—innocent messages caused by boredom and a lack of impulse control.

This would include the numerous hearts drawn containing initials and messages like “six billion people, six billion souls, sometimes all you need is one.”

Much of the graffiti currently in the library is romantic, sexual, hopeful or confessional in nature. Complaints about tests and assignments are popular and there are more than a few ironic musings on the acts of reading and writing graffiti.

“Bubblegum graffiti, because it’s so impulsive, and because there’s so many people that think it’s not such a big deal, is one of the hardest types to combat,” says MacIsaac.

He says this kind of graffiti “almost gives permission” when someone else sees it—another person might sit down at the site of the original graffiti and decide to have a conversation.

“And then some of it goes downhill, it becomes derogatory or it becomes off-colour very quickly.”

MacIsaac says that anything vulgar or obscene will have to be removed immediately.

Graffiti inspires more graffiti when it’s left up for more than a day. Conversations have developed on many surfaces in the Killam, some of them seriously offensive.

“F*** Ontario Kids Are Gay,” someone wrote on a desk before “Gay” was scratched out and “Supercool in my books” was written next to it.

Above a verse penned on a wall from the Gospel of Matthew, someone anonymously suggested the graffiti’s author be castrated.

A heart drawn on a wall in red pen contains the words “Loaded Ladle,” arrows pointing to the heart stem from the words “Fresh, Ethical, Local, Vegan, Delicious”But a cartoon cowboy is defecating on the heart, which has since been crossed out with the message “F*** You” next to it. A message below an arrow pointing to the heart reads, “segregation ostracizes you dumb c***.”

Where someone wrote “Obama is a n*****” in large letters on a hallway wall, the last word of this message has been scribbled out. An annotation has been added, “Graduated from SMU.” At some point “Obama is a Human” was added below, the prefix “sub” was placed before human, and later crossed out.

That same wall space has four large swastikas and the words “I hate homosexuals,” “Burn in hell,” Next to “Keep The F** in the Bag!!” in this area, someone added “or the closet.”

Some messages are just threats— “I’m gonna rape you,” “I’m the night watcher.”

While there are plenty of sexual messages targeted at no one in particular, some people move beyond writing their current desires to putting up phone numbers advertising sex.

The Gazette called five of these numbers to see if anyone had faced harassment from having their digits advertised.

Only one person answered, a student at Saint Mary’s University.

“I think that’s so horrible,” she says of her number being written on a wall, though she has not received any calls because of the graffiti. She says that now that she knows this, she thinks she should change her phone number.

And while the women’s and gender-neutral bathrooms of the Killam are nearly free of graffiti, some surfaces in the building’s men’s rooms are practically hieroglyphic.

Where “F**GS” is carved into a bathroom door, it has been crossed out, with “No hate” carved next to it.

In the same bathroom, you can go to a stall where a large drawing of a man has been defaced to look like Adolf Hitler. “Wash yo’ hands!” was all his speech bubble once said – now, below that, “of the Jews” has been added.

Reach for toilet paper—under the dispenser, “kill n*****s” is written in tiny print next to a swastika.

So why had this graffiti gone unreported, some of it for years? 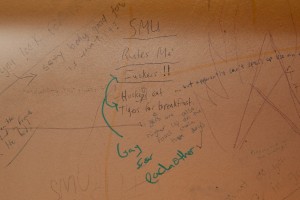 Graffiti is often added onto by others (Photo by Chris Parent)

“I’m not even sure, because I would report it, especially if it is that hateful,” says Joyline Makani, head of the Killam Library. “I think it might be, too, as administrators that we might not have told [students] who to report to.”

“It’s depressingly common and mainstream and accepted, unfortunately,” says Laura Ovens, women’s rep on the Dalhousie Student Union. “At this point, probably, it might not have occurred to anyone that anyone would do anything about it if they did report it.”

MacIsaac says he did a presentation in the past to about 300 members of facilities management, where staff were encouraged to report graffiti.

He says Dalhousie doesn’t have a “culture of reporting,” but that security services always encourages reporting graffiti and suspicious behaviour. Dalhousie Security maintains a Twitter account where reporting of graffiti is promoted.

“We need to really start this conversation, ‘Hey, let’s take care of each other, report things’, ” says MacIsaac. “You don’t have to wait for something really bad.”

Makani says that though ignorance is not an excuse, some Canadians who have been here for a long time might take for granted that you should report graffiti, and not all students may be aware that it’s a crime.

She says she’s in support of an anti-graffiti campaign or a program of some kind to be started at Dal.

“It’s always important that we have an anti-graffiti kind of awareness, that we educate our community that this is not good, and sometimes it’s a hate crime,” says Makani.

In an email to the Gazette Lisa Delong, the office’s HREA, wrote “In the last ~1.5 years, we have had two such incidents.”

If vulgar or obscene graffiti can’t be taken down, MacIsaac says facilities management may just paint over offending messages, even if it doesn’t look pretty.

Exterior maintenance at Dalhousie is paid for from a facilities management budget.

MacIsaac points out there are over 110 buildings on 75 acres of campus for security staff to look after, and graffiti is not their only gig.

Facilities management has a response strategy regarding graffiti, but they only patrol exteriors. The graffiti removal company Goodbye Graffiti is also contracted to proactively go on graffiti-hunting tours of Dalhousie’s exterior.

MacIsaac says Dalhousie spends somewhere between $50,000 to $60,000 a year on graffiti removal.

“It’s being spent to keep campus clean, and it’s stuff you never, ever see,” says MacIsaac.

But maintenance done to the interiors tends to come from the budget of the faculty or the group that runs the building.

MacIsaac says the one-off costs that go towards covering up really offensive messages in the library could be managed by facilities management, but it would be on the Killam’s books to find the money for interior graffiti cleanup or replacing any tables.

A conversation would have to be held as to whether or not graffiti cleanup in the Killam is where the library’s money should be directed. Dalhousie Libraries have already suffered a 3.5 per cent cut to their budget this year.

In the meantime, students are urged to report any graffiti to Security Services.

A collection of photos from the Killam 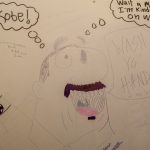 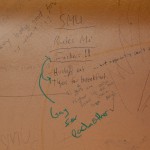 Graffiti is often added onto by others (Photo by Chris Parent) 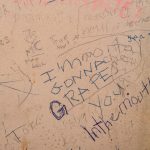 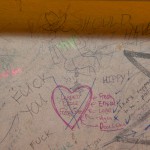 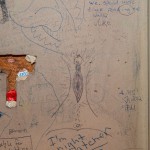