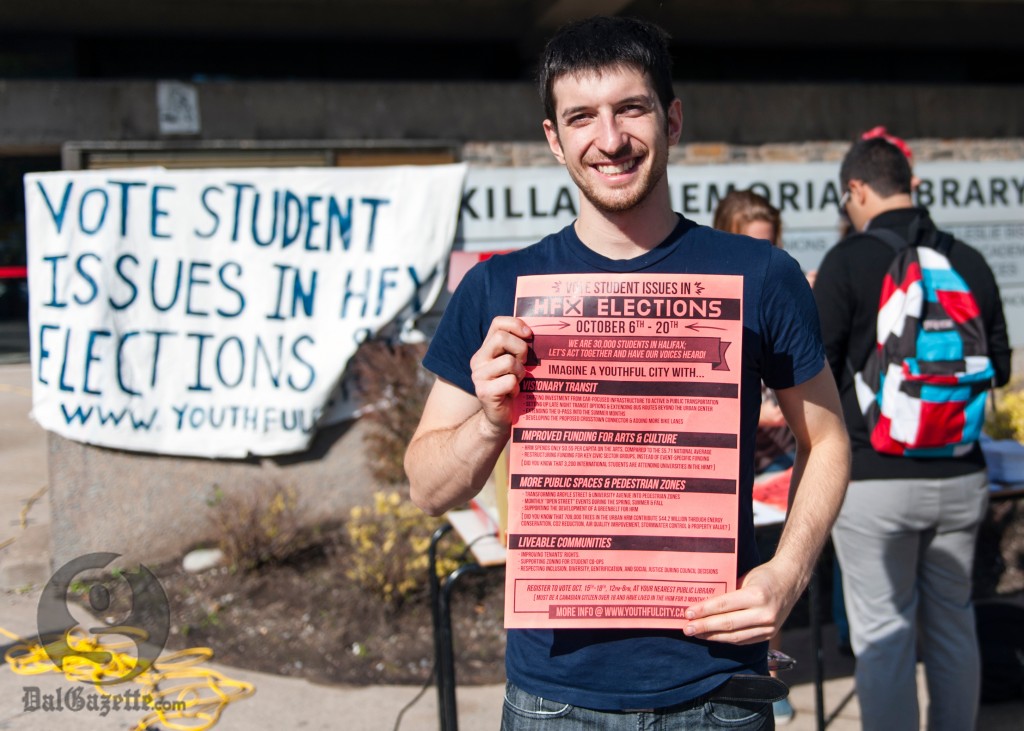 Matt Glynn, seen here outside the Killam, has been campaigning all across Halifax. (Photo by Chris Parent)

With many students able to vote for the first time, Dalhousie has been increasingly involved in Halifax politics, from candidate debates in the SUB, to voting information sessions.

The Metro Student Community Coalition (MSCC), an advocacy group representing the Dal, University of King’s College, Saint Mary’s University, Nova Scotia College of Art and Design and Mount Saint Vincent University student unions, is one of the organizations behind these events.

Matt Glynn, the coordinator of the MSCC, emphasizes the importance of the student community in the wider political arena. He highlighted how, in the last municipal elections, just over 36 per cent of eligible voters voted, and the 30,000 Halifax students eligible to vote this year can have a lot of influence.

“Students could have their voice heard,” he says. “We shouldn’t be a marginalized community”.

In reflecting on the debates held in the Dalhousie Student Union Building (SUB) on Oct. 1 and 2 Glynn felt that although the turnout was good, many of the student issues were pushed to the sideline. Although the MSCC had a say in setting the agenda for the debates, much of the focus was on tax reform and urban sprawl. Such sentiments were shared by students.

“I feel like last week’s debate could have been more pertinent to the student body,” says Jennifer Yakamovich, a second-year international development studies major at Dal. “I’d like to have seen more time given to questions, like from students and the audience.”

The MSCC also organized the booths in the SUB that gave report cards to students, providing them with information about the candidates. “I think being informed is important before voting,” Yakamovich says, “Sometimes I think a person’s voting decision could be kind of narrow or careless, or based on a single predisposition.”

The MSCC hopes the legacy of this election will be political as well as social. One initiative they hope will promote good relations between the student community and the wider HRM is block parties, open house events at which students, professors and their neighbours share food, listen to music and discuss what they would like to see change in their community. The first set of block parties took place between Oct. 8 and 14 and there will likely be more to follow later in the year. Another event organized by the committee in September was Spokes Out, a massive community bike ride aimed at promoting alternative forms of transit in the city.

“Opportunities for student engagement in the community are through word of mouth, meeting the right people at the right time, having the right conversation.” says Yakamovich. “Conversations are important.”

One problem facing the MSCC is the transitory nature of the student population. Of Dal’s 17,000 students, only half of them are permanent residents in Nova Scotia, and this number looks set to decline even further over the next few years. Glynn accepts the problem.

“We have great educational institutions, but government and local community need to work to maintain that. It’s being lost to economic powerhouses abroad and in places like Alberta,” he says.

However, Glynn feels that the opportunity for political engagement now being given to students from outside of the province could help to create more permanent ties between them and their community: