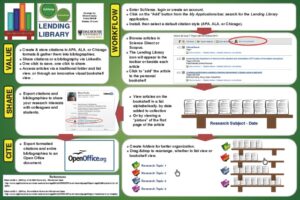 Dalhousie students had the opportunity to pitch their own web creations to an internationally-based publisher Oct. 25 at the Elsevier WebApp Concept Design Competition.

Anatoliy Gruzd, a professor of library and information science and the organizer of the event, says he was surprised at how many faculties were represented.

“One way to evaluate success is the variety of ideas and variety of points of view,” he says. “That was one of the goals — to include as many schools as possible. That’s why we needed experts in different fields.”

Some groups focused on integration of social media, while others created a design that brought the most geographical relevant information up first or helped to create an online bibliography.

“We knew we’d get a lot of involvement from the MLIS students since Anatoliy’s a professor in our faculty,” says student co-ordinator Melissa Anez. “But I see a lot of different faculties represented out here.”

The seven judges, who divided the 19 entries between themselves, included four Dal profs, two from other universities and the producer of the designs.

“We want to improve the way people search for information,” says Gruzd. “It’s not just about records. It’s also about converging other information and thought processes.”
Elinor Crosby, a second-year graduate student in library and information science, created a “Lending Library” design with two other students.

“The most effective way to write and work on a research paper is to have all your articles printed out and scattered in front of you on your desk, right? Well, we wanted to capture that on the computer,” she says.

E-commerce student Jude Abbey says his idea is based around the idea of bringing people and databases together into one hub of social media.

“I just got here and I’m looking around and I think mine is really simple. I think we have the most plain one,” he says of his collaboration with fellow student Victor Hireh. “They’re all intense. We’re keeping it simple,” Abbey says.

Presentations were judged on originality, feasibility, usability and suitability. “You can come up with a great idea, but if it takes a year to put into place or it’s not useable there’s no point,” says Gruzd.

Winners were announced online Nov. 1. Three groups will have their designs produced. “It’s a multiple step process,” says Gruzd, “and some students may take it further if they wish.”

Editor’s Note: And the winners are…! Congratulations everyone.