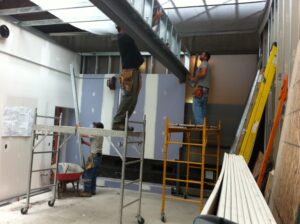 Construction at the Killam entrance. Photo by Asha Katz.

On Aug. 23, the Dalhousie Libraries blog announced that construction was to start in the Killam Library the following day. The central purpose of the construction, which is now well underway, is the installation of a Subway outlet in place of the atrium.

The post was met with comments saying the construction would have a negative effect on “the “library atmosphere,” “noise and smells” and Fairn’s original vision for the building in 1966.

Library staff members are adamant in communicating that this is not a library initiative; the Subway construction is a Dal Food Services project. Tina Usmiani, the communications manager of the Killam, says the decision was delivered to university librarian Bill Maes near the start of the summer and was vigorously protested.

The current construction is scheduled to finish by Oct. 11 and will be directly followed by an upgrade to the Library Bistro and Second Cup service.

Usmiani is responsible for writing and posting the blog for the Killam. She’s been at the frontlines of delivering information to the public about the construction, and also receiving their feedback.

“[The atrium] was a very popular workspace,” says Usmiani. “We used to get a lot of comments about how people loved the sound of the running water, so it’s a shame to lose that, but there are lots of students who will be very happy, which you can’t discredit.”

With a continuously growing student population, Usmiani says food services are an issue on campus and it’s important that they are able to keep up with student intake.

According to a Dal News interview earlier this month with Derrick Hines, director of food services at Dal, bringing a Subway to the campus has been a plan for many years. The initiative is a response to student requests from a food survey that took place last year. Despite this, there are those who do not seem to think the change will be an improvement.

“Apart from ruining the look of Killam Library when you first walk in, and the food smells that the Subway will bring, it’s also going to create massive lines that will make the space totally unusable as a study area,” says Megan Gelmon, a fourth-year Dal student. She has always appreciated that the seating area around the atrium offers students working in groups the advantage of a library environment where you can also discuss work.

According to library staff, the construction itself has not been overly disruptive. Dust and debris have been contained within the site, and the majority of the noisy work has been outside of the library’s open hours.

Those who would like to voice their thoughts on the project are encouraged to do so at the Killam’s “Comments Compliments Complaints” board in the entrance.