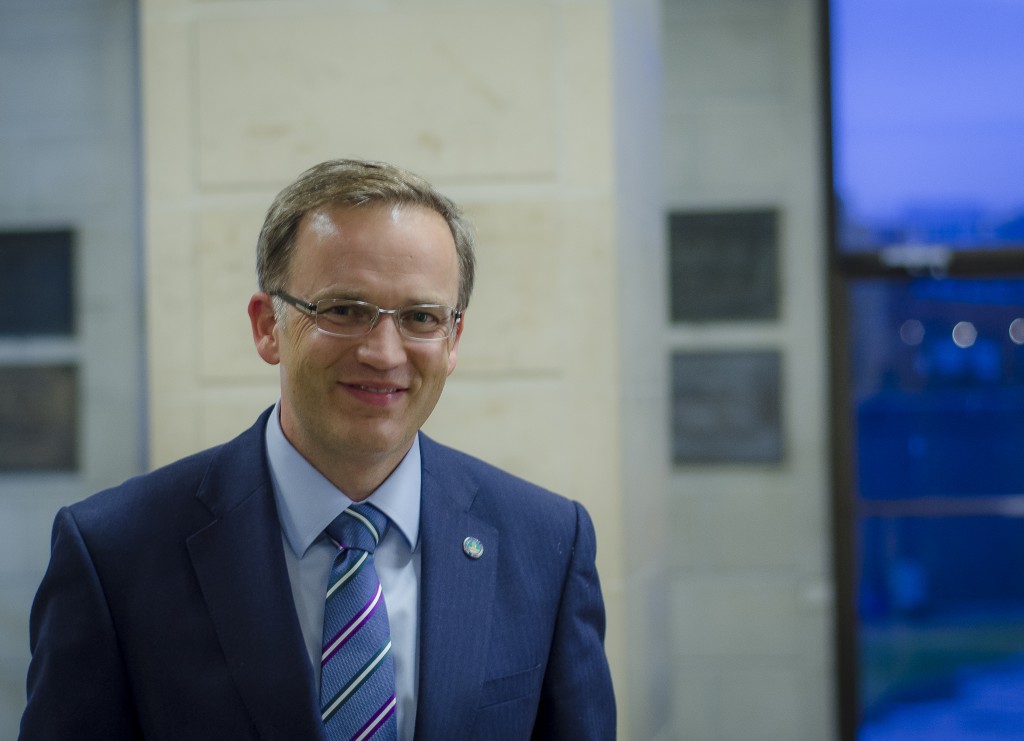 Dalhousie has found its new president.

Richard Florizone, currently vice president of finance and resources at the University of Saskatchewan, will take up the post on July 1, 2013.

“The university is fantastic. It’s one of Canada’s greatest universities,” says Florizone.

“Everyone’s been really warm and welcoming. It’s a great honour—and a privilege and pleasure—to be here.”

Taking over from current president Tom Traves, he will be Dal’s 11th president, and the first new president in over 17 years.

Currently on secondment at the World Bank, advising on public-private partnerships, Florizone holds a master’s degree from the University of Saskatchewan, and a PhD in Physics from MIT. He’s worked at the Boston Consulting Group and Bombardier, in addition to holding an administrative position at Cambridge.

Though his official biography says he held “teaching and research assistantships” at MIT, the Gazette has not been able to find any indication he has ever taught at the faculty level.

The 14 members of the committee came to a unanimous decision about two weeks ago, says Chris Saulnier, former Dal Student Union (DSU) president and the undergraduate representative on the presidential search committee.

“Dr. Florizone really did a good job of impressing the different members of the committee, no matter which segment of the university population we were representing,” says Saulier. “It is a very unique way to come into the president role, but he is the kind of candidate we want as president at Dalhousie.”

“We felt that he was clearly the best choice.”

But not everyone is pleased with how the decision was made. In a statement provided to the Gazette, Dal Faculty Association (DFA) president David Mensink says that the DFA is concerned by the absence of the customary consultation with the larger university community.

“To appoint a president without consultation shows a corporate, top-down managerial approach, rather than a collaborative, collegial approach,” says Mensink.

“In addition, Dr. Florizone has a lot of corporate and financial experience and less academic experience in teaching and research as one might like to see in a university president.”

However, Florizone emphasizes the importance of his knowledge of the inner workings of universities in making him suited for the position.

“I think a president needs to be bring a knowledge, and an ability to build partnerships in the external environment,” he says. “A central element of the job is trying to secure the resources to enable faculty, staff and students to thrive.”

He has been involved in a number of capital campaigns, including Cambridge’s 800th anniversary campaign, which reached its goal of 1 billion pounds 2 years ahead of schedule.

Florizone spent Nov. 8, the day the Dal community learned about the committee’s decision, meeting with the members of Dal and the broader Nova Scotia community including mayor Mike Savage and Nova Scotia premier Darrell Dexter.

“It’s recognition of the importance of Dalhousie: this is a very important national university and important to the region,” says Florizone.

JD Hutton is a board member of NSPIRG (Nova Scotia Public Interest Research Group), a group opposed to the corporatisation of university. Hutton says that replacing public funds with corporate donors can affect content in the classroom.

“We know this man has worked for things like the Boston Consulting Group, which Mitt Romney came out of, and according to The Chronicle Herald he is an expert in private-public partnerships. And so from that angle we have our concerns,” says Hutton.

“His experience is in the private sector, and that will certainly influence of operating at Dalhousie—it’s pretty hard for it not to,” he says.

“But we still need to give him a chance. “

Before heading back to Washington D.C. to finish his work at the World Bank, Florizone met with the Dal Student Union.

“Some of the greatest things I worked on I achieved by working with students,” says Florizone, citing his work on student housing in Saskatchewan.

“Don’t get me wrong,” says Florizone, “there will always be times when the students’ union and the administration differ on topics, but that’s always going to happen on things like tuition. But nevertheless, if there are places where we can find common ground, we can really achieve some great stuff.”

Like most North American universities, Dal will face a number of challenges  during his tenure as president, says Florizone.

“There’s a lot of focus, across North America, on controlling costs: administratively, and academically,” says Florizone. “It’s a little bit different here, but only in the sense that the funding situation in Nova Scotia is perhaps a little tougher than some jurisdictions. But it’s a lot better than others.”

Florizone is planning for “100 days of listening” when he takes office in July, to get a better sense of the challenges and ambitions of the community.

He, and his wife and kids will be moving from Washington to Halifax around May.

“I’m honoured by this, and I’m excited just to roll up my sleeves and meet more people at Dal and in the Halifax community, and to get working,” says Florizone.