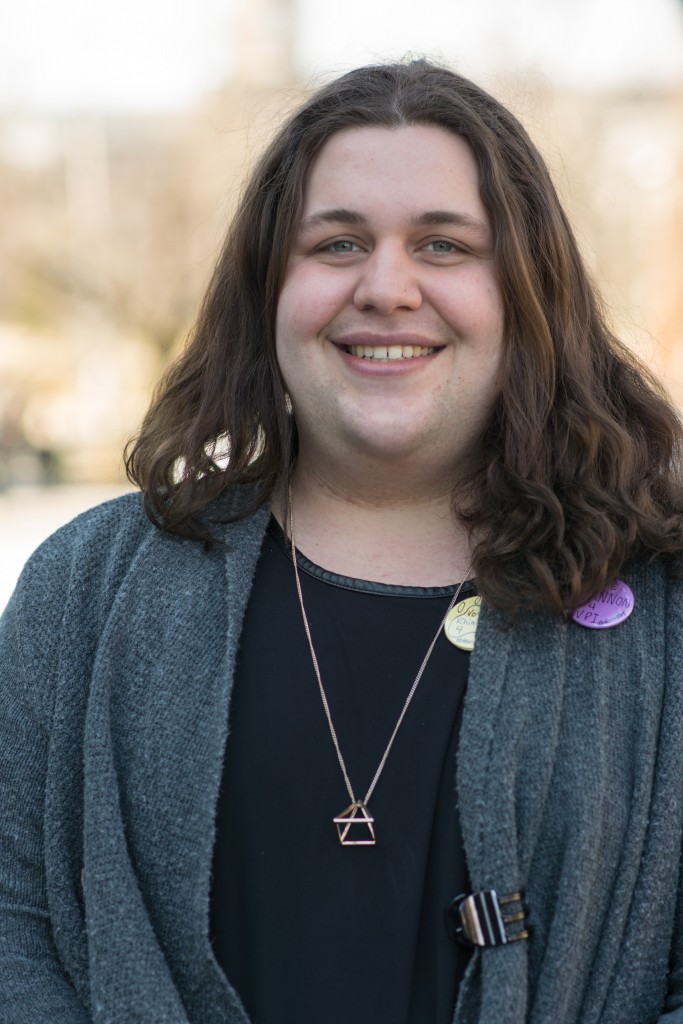 Program: Completed a Bachelor of Arts Double Major in Psychology and Gender Studies in 2014, currently working on a Bachelor of Social Work.

Relevant experience: In my first couple of years at Dal, I joined a fraternity and was pretty active with them on their executive. In 2010, I started at the DSU working as event staff. Then I took a year off from school and when I came back, I started to get more involved in social justice. I joined DalOUT as the public relations manager, and that’s how I got involved in queer, trans and feminist organizing in Halifax. Over the last four years, I’ve spent three years on the DalOUT executive: I was public relations manager and then vice-president, took a year off and now I’m the DSU rep. Through that, I sit on DSU council as the LGBTQ rep, and through that I sit on the Grants Committee. Two and a half years ago, I started working at the Student Union Building at the information desk. I’ve been a board member of South House for two years now; last year I was the chair of the Board, and I volunteered a bit before then. As well, 2012-2014, I volunteered at the DSU Food Bank. I was also on the Shinerama committee. I’ve been an O-Week leader twice; I was on the O-Week committee this year. I’m the Vice-President of the Social Work Student Group right now. I’ve also had minor experience with smaller societies like the Dal Diabetes Society and the Dalhousie Parkinson’s society. An easier breakdown of my experience can be found on my website.

Why are you running for this position?

I’m running for this position because I really believe in students, I really believe in community and in harnessing the power of students and community into collective action. I think that a lot of people on this campus are doing really great work, but we often only work in silos. I want to bring people together so that we’re working on these issues together to increase everyone’s capacity. I’ve been here for a number of years; I really believe in this place and in our Student Union, specifically. I want to take that to the next level.

The first would be to have different types of society round tables: for example, levied societies, faculty societies and interest societies, and get them communicating on those levels.

The second would be to get together like-minded societies who are doing similar work but maybe aren’t reaching out to each other in the best way possible. The example that I give for this would be getting together Get Real, DalOUT, South House and OUTlaw. Those four groups can have a semi-regular space to work together, share what they’re working on and see what they can do to help each other out.

What will you do to enhance the student experience of marginalized groups on campus?

Through the last couple of years that’s been one of my big interests, as well through my schooling. A lot of my academic and personal life has been involved in fighting for equity, fighting for social justice, fighting for accessibility. The DSU has been doing well on this in the past while; in the past year we’ve had a land acknowledgement that we use at the beginning of events and at council. There was an equity policy and an equity hiring policy put into place. I think it’s just about continuing those steps and making sure that there is active and meaningful representation in all of the governance and outreach that we do.

I think that an important thing to consider when trying to engage marginalized students is that giving someone a seat at a table, and saying that “we have a queer student on this committee,” for example, isn’t enough. If you want to meaningfully engage people from diverse groups or backgrounds you have to centre your work around them so that they want to be doing that work. If you want to work on queer issues, you have to do something that makes queer people want to join in and be a part of that work. That way, people are engaged in a meaningful way that centres them for who they are.

How would you improve this year’s communications with students?

One thing I want to do is prioritize communicating with students in a way that reflects that students shouldn’t have to seek out information to know what’s going on in the DSU. I want to improve the DSU Dispatches that get sent out, I want to be more open on social media and I just want students to be able to engage with what’s going on in the DSU on a day to day basis. I know that every two weeks the executives give a report on what they’ve been working on—but why can’t that just go out to general membership? There are lines in not overflows of information, but there could definitely be a balance in letting students know what’s going on.

How Twitter-savvy are you?

I’m pretty Twitter-savvy. I have 446 followers. I think I’m better on Instagram, though.

What do you think of Kaitlynne’s performance this year?
I think Kaitlynne did a really good job. I’ve worked with her in a couple of capacities, doing a lot of society work I worked with her from that perspective. She was always very helpful, receptive and open. I really liked the way that over the last semester she’s been working with the Loaded Ladle to get more food on Sexton Campus, I appreciate that. I like that she used her commissioner position to do research for students, and to give students jobs. I think she’s done a really good job this year, and if I get this role I hope to build on that. I’ve had many conversations with her throughout the year about what she does.