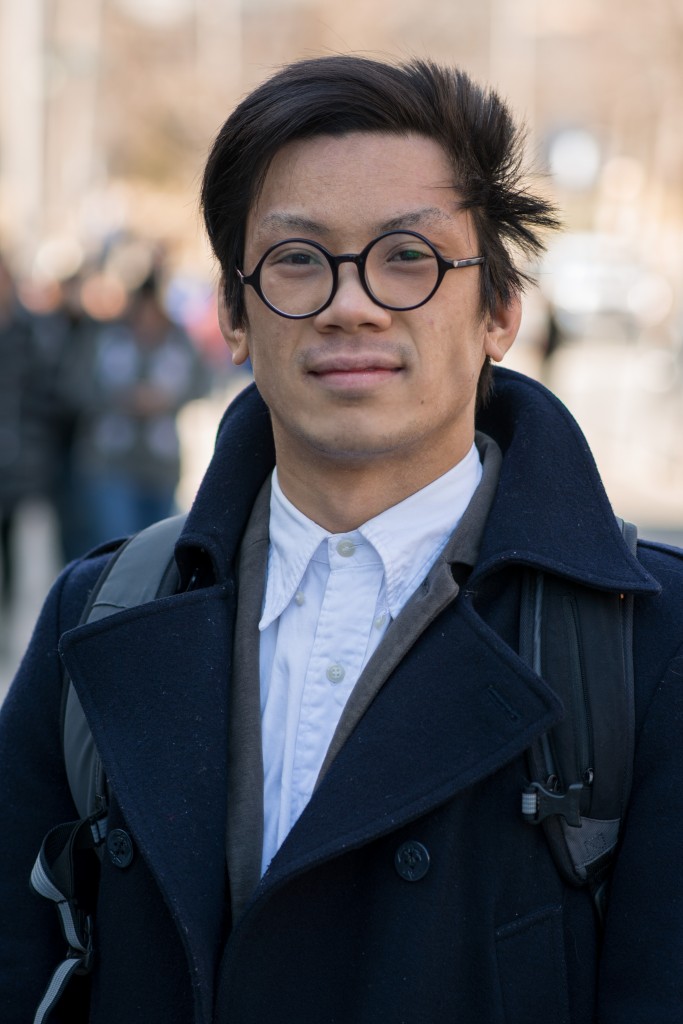 Relevant experience: I’ve been an O-week leader once, I’ve been on the O-week committee twice, I’ve been a Student Life leader, I am the president of the Dal Breaking Society, I was asked to be a student panel speak on a health promotion panel, “Unboxing the Man” (we talked about feminism, gender).

What should be the main priority of the Vice President Student Life next year?

This is obviously a tricky question. We just had our debate and one of the big things is that we’re here to support the students. I think we all agree that we want to engage the students because we represent them, but the way that we approach that is one of the critical issues, as well. From a health promotion lens, you take a population perspective: we have—what, 19,000 students?—a lot of these events are barely hitting the hundreds, so it’s barely the tenth of whatever the population is. I think one of the main things that I think the VPSL should tackle is accessibility. Are we really making it accessible for Sexton students? Are we really making it accessible for the Truro, the DASA, their association? Are we really looking at all the specialities rather than, oh, this is what the Studley campus has, and we kind of talk to the Carleton campus. But are we really encapsulating all these things? Are we getting all the marginalized groups, like the LBTQ+ voice, are we getting the international students’ voice? I think the past VPSLs have done an incredible job, but I think that is more room for improvement for accessibility. For us to really represent them [students], we have to identify their issues and we can’t just assume their issues. The accessibility reverts to engagement, and we really have to hear from them, but to do that, we have to make it more accessible. That could be take on by a wide range of program or initiatives, but I think that’s the main I think that the VPSL has to focus on.

If you had to pick a student event to remove from the social calendar, what would it be?

I’m really struggling with this hypothetical, like why do we have to remove a social event? Is it a lack of funding?…I would take a more comprehensive approach to it because I am supposed to represent the students, I shouldn’t pick for them—that would be paternalistic, in a way. I would ideally do is, absolutely we could take away an event if our funding was lacking, but in respect to what the students want, they should be able to decide what they want the most, and we should keep those.

What do you like to do on the weekends?

If the weather is nice, I like to go on a hike. We went to the Truro campus for the debate, and there weren’t any really good hiking trails nearby, but it was gorgeous out. I like to do a variety of things. The main thing is I like to break dance. I like to hang out with my friends, maybe play some board games. It really depends on what the friend group is up to. Generally, we just like to talk, we’ll sit around, maybe see a movie. The Deadpool movie was hilarious—it was a little vulgar, but it was entertaining. For the most part, it can range from anything. Because it’s the academic year, I’m teaching break dance at Maritime Conservatory and Halifax Dance, I’m usually teaching four or five classes on the Saturday, I like to play it chill and have a regular board game night or a movie night with my friends. It can always change. The main thing that always sticks in there is that I’m always dancing, I’m always like, hey, to my Dal Breaking Society or my crew, do you guys wanna go hang out do you guys wanna go practice? Those are generally my weekends.

Have you ever been kicked out of a bar?

I’m wondering why this is relevant. I’d rather not answer that at all because there’s a lot of stigma around that.

What is your top band that you’d want to bring to Dal Fest?

I’m more into funk and soul. I’d love to bring Busty and the Bass back. The Mellotones are good, but I’ve heard they’re a little pricey. Is this a hypothetical, like any band? [Yes.] Oh, dang! This is a hard one. Maybe the Red Hot Chili Peppers or the Black Keys or John Gold. Like top three? I’d have to say I’m on a Black Keys sort of vibe, so Black Keys.

How will you make O-week and Dal campus more inclusive?

My main platform is to engage the students and move forward after doing so. This goes back to the health promotion lens: we don’t wanna be paternalistic and we don’t wanna identify the wrong barriers or facilitators. We want to hear the voices from those marginalized groups, if it’s LGBTQ, if it’s the international students, if it’s the Sexton students, if it’s the architecture students, or if it’s some group that’s having trouble voicing them, we have to try and account for that and hear what they have to say that might be a perceived barrier or issue. So if they’re saying, Sexton doesn’t get considered most of the time anyway, or all the services are in English, or all the washrooms are identified as the dichotomous, like boy or girl, we have to identify those issues and say, we should just change the signs, like washrooms are just washrooms. Also what their suggestions are, and some of them might be tangible and very good ideas and things we might not think about. We have all these incredible resources and all these incredible thinkers at our disposal in the Student Union. It comes back to that classic saying: two heads are better than one—and if you have 19,000 heads, all you have to do at that point is find a good, structured way for everyone to share their ideas.

What did you think of Kathleen’s performance this year?

I think Kathleen did an incredible job. I think that she’s human, but given that, a lot of the initiatives she took on were very well done. I think there are a few things that could be improved, but that’s with any VPSL. Danny Shanahan [VPSL 2013/14, 2014-15] had his strengths and weakness and Kathleen had her strengths and weaknesses—and I’ll certainly have my strengths and weaknesses well. I don’t know what the main issues are with the student body at this point, other than having a low voter turnout. And I don’t know if it was due to Danny or Kathleen, but the voter rate went from 11 per cent to 17 per cent last year. The main idea is to get to 30 per cent this year—which is amazing! It’s a little ambitious, but I’m willing to strive for it. I think there should be a more equitable approach to reach out to all the societies and all the resources we have at Dal. It’s a trade-off at certain points, where you try and create new events or resources. We have the open space at LeMarchant Place, and you can go talk to someone there if you’re anxious or stressed and they can refer you, and we have all the health services there. We have all these new services there and it’s incredible, but are they really accessible? They’re available, but they’re not accessible. It comes back to the analogy that you’re in the Superstore. I’m 5’9, I’m not terribly tall, so if there’s something on the top shelf that I really want, it’s gonna be hard for me to get it—it’s there! but it’s gonna be hard for me to get it. When it’s on the top shelf, it depends on who you are: it might be the societies, it might be the resources, it might be academic counselling. I think that the past VPSLs have done incredible work, and we can move forward from there.