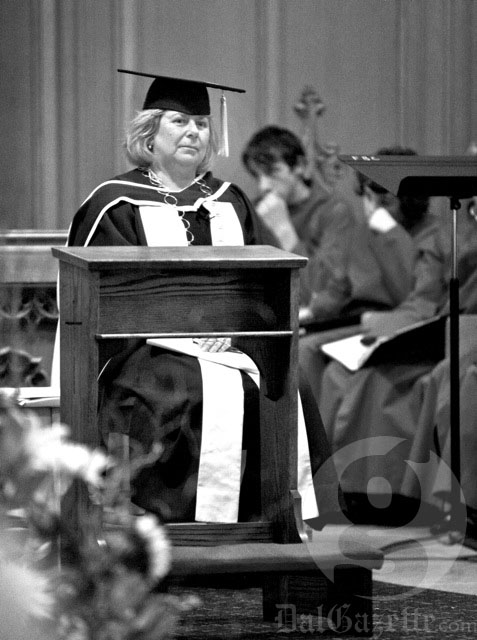 Leavitt at the installation ceremony. Photo by Pau Balite.

The new president of the University of King’s College was formally installed Oct. 21 in a ceremony that, regardless of the pomp and circumstance, was not without its laughs.

Anne Leavitt took on the role of president Aug. 1, but last Friday at First Baptist Church she spoke the Latin, signed the oath and wore the ceremonial robes and chain for the first time at a ceremony with approximately 150 people in attendance.

The garb, however, made for a bit of a nuisance as she made her speech. “Excuse me, this is a bit – well, probably not a word I should say for it in public, but it’s unpleasant,” she said as she fidgeted with the ceremonial chain draped over her neck.

The full King’s faculty was present and robed as well, as was Nova Scotia’s Lieutenant Governor Mayann Francis and representatives from other Canadian universities. “The president of the University of King’s College is in very fine company indeed,” said Leavitt in her installation address.

Leavitt peppered her talk with quips, succeeding in getting a laugh out of the largely academic audience. She followed advice from a friend, she said: “Think of yourself as the body at an Irish wake… They need you to have the party, but no one expects you to say very much.”

Despite the celebration in the air, Leavitt’s speech also dealt with the issues King’s will be facing over the course of her four-year presidency.

“Over its long, long history, King’s has faced down many serious challenges, and I should say most of them were financial,” she said. “Like all universities in Canada it is headed again, I am sad to say, into some financial stormy waters.”

The chancellor of the evening, The Honourable Micheal Arthur Meighen, Q.C., also spoke gravely of the university’s problems. He said over the summer King’s spent $2 million on getting the university’s fire safety up to code and the President’s Lodge is uninhabitable now as the wiring, among other things, are being replaced. The student theatre and the chapel are also in need of an upgrade.

“And all this in a climate of declining government funding, tuition freezes, and global financial insecurity,” he said. “We might well wonder how King’s will survive.”

But he also expressed hope for the university’s future. “King’s is larger than the quad,” he said. “We are the brave carriers of the torch that brought us all here.”

Leavitt echoed the sentiment. “I believe it to be the jewel in the crown of Canadian higher education,” she said. “And my 10 or so weeks here have convinced me that that is correct.”

“It’s so true,” he said of the important role Barker played among students. “But (Leavitt) is not going to be afraid of making some tough decisions — not that President Barker was, but obviously she’s going to confront some of the financial stuff head-on in a way that past president, Barker, because he was leaving, couldn’t,” he said.

“Obviously she hasn’t been on the job for very long. I think we, for the most part, have just been really excited about seeing what kind of leadership she demonstrates.”