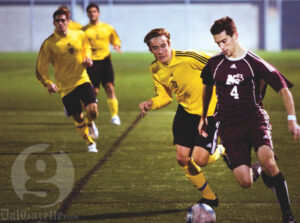 The Tigers brought matters into their own hands this past weekend, silencing two visitors.

Dal’s Phil Parsons attempted to not just silence Saint Mary’s on Oct. 21 but their small, yet vocal, supporters, too. The rookie drew scorn from the opposing side when he ran toward the SMU fans, raising his finger to shush the crowd after he scored. His goal would stand as the only tally in the Tigers’ 1 – 0 win. Two days later, Dal continued rolling, quieting Memorial’s dwindling playoff dreams in a 2 – 1 triumph.

The two victories at Wickwire Field propelled the men’s soccer Tigers, 6-3-2, to third in the AUS with 20 points after the weekend. Dal is sandwiched between St. FX’s 21 points and the 19 of UPEI. The Tigers clinched a playoff spot after the weekend.

Parsons may have welcomed a target on his back, not only for scoring the Oct. 21 match’s only tally in the 11th minute, but his animated shush gesture afterwards. He says he has no regrets.

“I know a bunch of them in the crowd because we play club soccer over the summer and I just had to, you know, rile them up,” said Parsons. “It’s only fair.”

And, really, he probably didn’t care about his taunt minutes after the game. His team, after all, displayed a tremendous defensive effort in the second half, holding the 1 – 0 edge until the final buzzer.

“When you’ve got Ben Ur in goal, he’ll stop most everything, so if we can limit the number of times a team can get a good look and a shot away than we stand a good chance at winning.”

Parsons’ eventual winner was a rocket. As the ball trickled out of the box on a Tigers offensive chance, Parsons went back to grab it, twisting quickly to heave a 20 yard kick above Adam Miller’s outstretched hands.

The Huskies bombarded Ur in the second half to try and even the rivalry match. SMU outclassed the Tigers, making it a surprise the home side only needed one goal to secure the win. Ur saved eight shots in the half; Miller only had to turn aside two.

Saint Mary’s Jhonattan Cordoba had a number of quality scoring chances. He believes the Tigers stole the game.

“We dominated the second half completely. They barely had one or two touches,” he said. “Don’t get me wrong, [Parsons had] an amazing goal, but after that, what did Dal do? They didn’t do anything. We were all over them; we were just unlucky. We didn’t score.”

The match was the Huskies’ first defeat of the season. SMU did, however, lose again the following day to Mount Allison. The Huskies, 3-2-5, are tied with Moncton for fifth place with 14 points.

In comparison to Friday night’s game, the succeeding Dalhousie and Memorial game on Sunday had a lot to live up to.

It won’t be remembered as a thrilling affair, but it will be recognized as another blow to the Seahawks’ playoff dreams. The Tigers claimed the 2 – 1 victory courtesy of two scores from Julian Perrotta in the 17th and 59th minute.

The game was knotted at one apiece after the first half until Seahawks goalie Michael Bartellas was called for taking out James Nearing’s legs on a rush to the net, awarding Dal the penalty shot. Bartellas would deny the chance, but Perrotta, along with other Memorial defenders, chased after the rebound and the ball bounced off the fourth-year and into the net.

It’s a call which drew ire from Memorial’s Steven Delong. He had three shots on net.

“The penalty shot they gave was suspect. You know, when you lose a game because of something like that, which wasn’t for sure a penalty – probably wasn’t – and then we lose a game like that? A tie would have been fair.”

Memorial is two points behind Saint Mary’s and Moncton for the final playoff berth. The top six teams qualify for the AUS championships. This weekend the Seahawks will play Moncton twice to end the regular season.

The Tigers conclude their season Sunday, Oct. 30 at 3:15 p.m. against the winless Acadia Axemen.