No longer idle at Dal 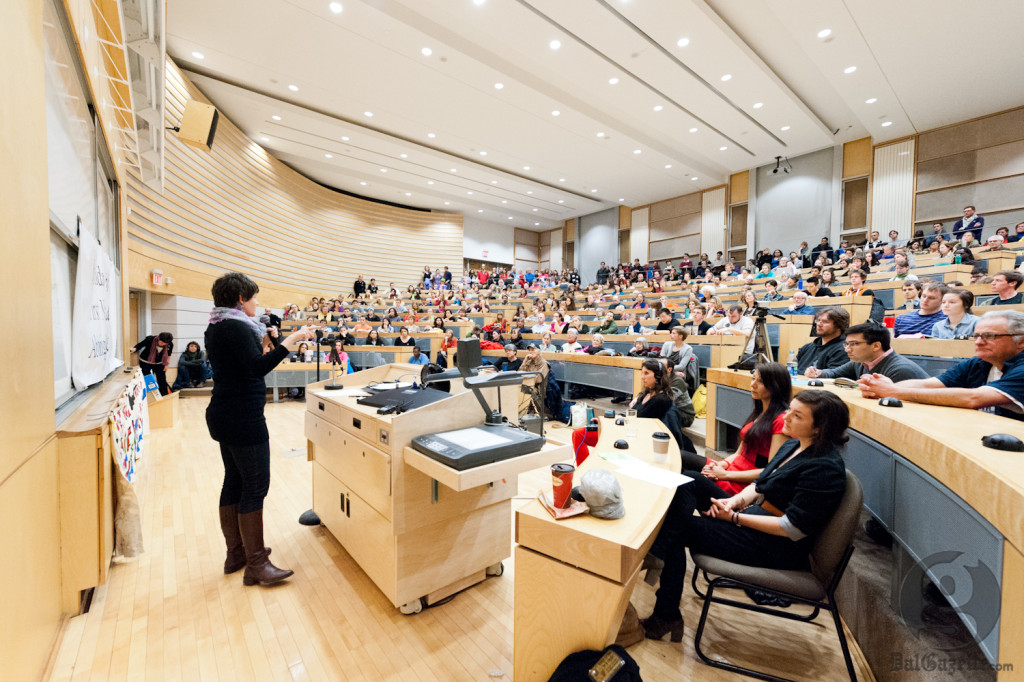 The auditorium was bursting with people. Well over 400 sat between chairs, on the floor, and against walls, all in solidarity with the Idle No More movement.

But the room was silent, save one voice. Tayla Paul spoke about her struggles as an Aboriginal woman.

For five years, she scoured garbage for food and walked miles every day with nowhere to go. Homeless in Toronto and Halifax, she spent her teenage years warding off predators and fighting for survival. It’s a brutal image, but she says it’s all too common for First Nations women.

The Idle No More ‘teach in,’ held at Dalhousie on Jan. 10, aimed to raise awareness on the challenges facing First Nations people and communities. Attendees included Halifax MP Megan Leslie and many members of the Dal community.

For Paul, the deluge of awareness about First Nations issues through Idle No More is long overdue.

Paul is a third-generation residential school survivor from Pictou born into a bi-racial family. It’s difficult to unravel the personal and communal plights of First Nations people, says Paul; her first experience with racism came from an unlikely place.

“It was in my own family where I first realized racial discrimination happened. I realized my white family was treated better than my Native family … by my mother.”

Sébastian Labelle runs Solidarity Halifax. He helped organize the event with Idle No More. He says the grassroots Halifax political scene is abuzz about Idle No More, but the community is confused about the ever-changing story.

“We had the feeling that this was a very important cause,” says Labelle. “The appropriate and needed next step was to share information and educate the broader public about the context of the struggle, the context from which Idle No More emerges.”

The Idle No More movement grew out of longstanding issues between the federal government and First Nations, but is specifically targeting bills C-38 and C-45. Both bills involve the constitutional rights of consultation between First Nations and the federal government. Some Aboriginal communities see these budget implementation bills as a final straw in already fraught intergovernmental relations.

Although the national movement has become mired in controversy and occasional confusion, Halifax seems supportive.

But for some Dal students, the teach-in was quite literally a class. For Marguerite Holland, attendance was mandatory. Her second-year Canadian studies class trickled into the right side of the auditorium and took careful notes during the presentations, a notable juxtaposition to the rest of the crowd.

“Environmentalism is kind of my thing, so it was cool to learn more about it,” Holland said. “I had heard of the bill C-45 but I didn’t know that it was affecting Aboriginals so much. So I learned about the background of Idle No More and I learned about what the effects of the omnibus bills will be.”