By Rebecca Dingwell and Lane Harrison

Peter MacKinnon hasn’t been on Dalhousie University campus for long, but controversy is already stirring. 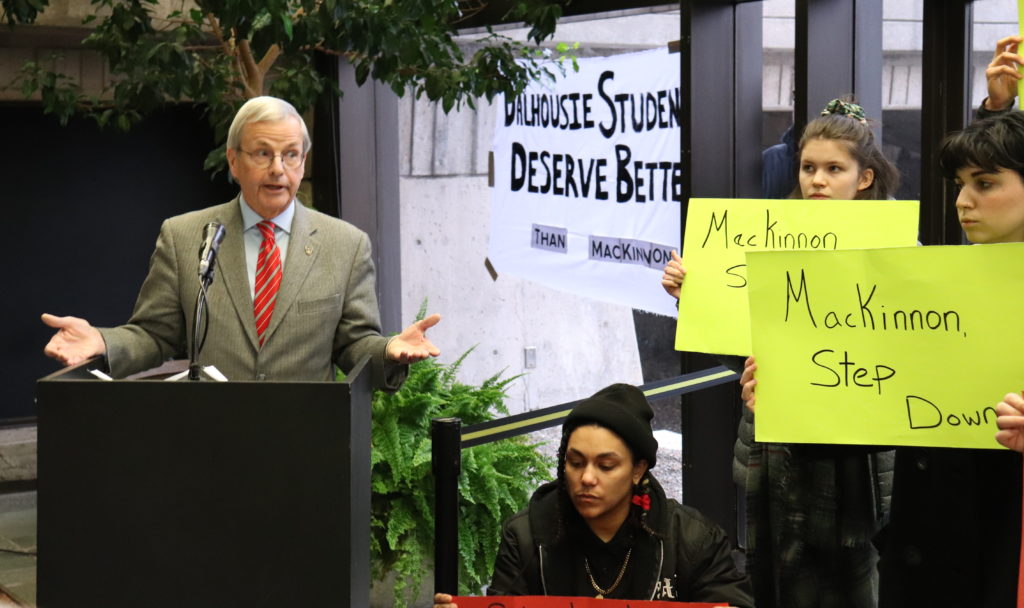 On Jan. 21, Dalhousie’s new interim president arrived at the Arts Centre, for his Studley campus welcome event. A group of silent protesters was waiting for him with a list of demands for the school, the first being MacKinnon’s immediate removal.

The protests stemmed from several excerpts of MacKinnon’s writing in his latest book, University Commons Divided: Exploring Debate and Dissent on Campus, which bemoans political correctness and references what MacKinnon sees as high-profile examples of “battles over freedom of expression.”

“When Dalhousie first announced that Mackinnon would be hired as the interim president, a lot of us started to research and we found his book,” said Isa Wright, a social work student at Dalhousie, and the National Queer Representative for the Canadian Federation of Students. “We were really concerned when we read those chapters.”

Along with Lianne Xiao, president of the King’s Student Union, Wright published the press release outlining the reasoning and demands of the protesters.

Students are taking issue with MacKinnon’s defence of Jordan Peterson and his choice to decline student’s requests to use their proper non-binary pronouns, as MacKinnon writes, “this is not a matter on which he can be told what to do.”

Students are also concerned with MacKinnon’s implication that blackface on Halloween is an issue of freedom of expression, writing that “these were Halloween parties … so describing them [as racism/bigotry] risks diminishing real problems of intolerance.” Additionally, MacKinnon critiques Dalhousie’s handling of the 2015 Dentistry scandal.

The full page of quotes pulled from MacKinnon’s book can be viewed here.

Freedom of expression is also an “indispensable condition” of the university “commons.” I define this as the space for the debate, discussion and collaboration that are both inherent in, and essential to, the idea of the university.

This commons has been tested so often in recent years that it is not hyperbole to describe it as a contemporary battleground over its boundaries. – Excerpt from article written by MacKinnon, titled ‘Freedom of expression is under attack at our universities’ published by The Conversation.

The protesters waited until the smudge, prayer and event introduction was over before beginning their silent protest: holding bristol board signs with their demands on them, as well as comments against MacKinnon’s problematic views and the University’s lack of transparency in appointing him. 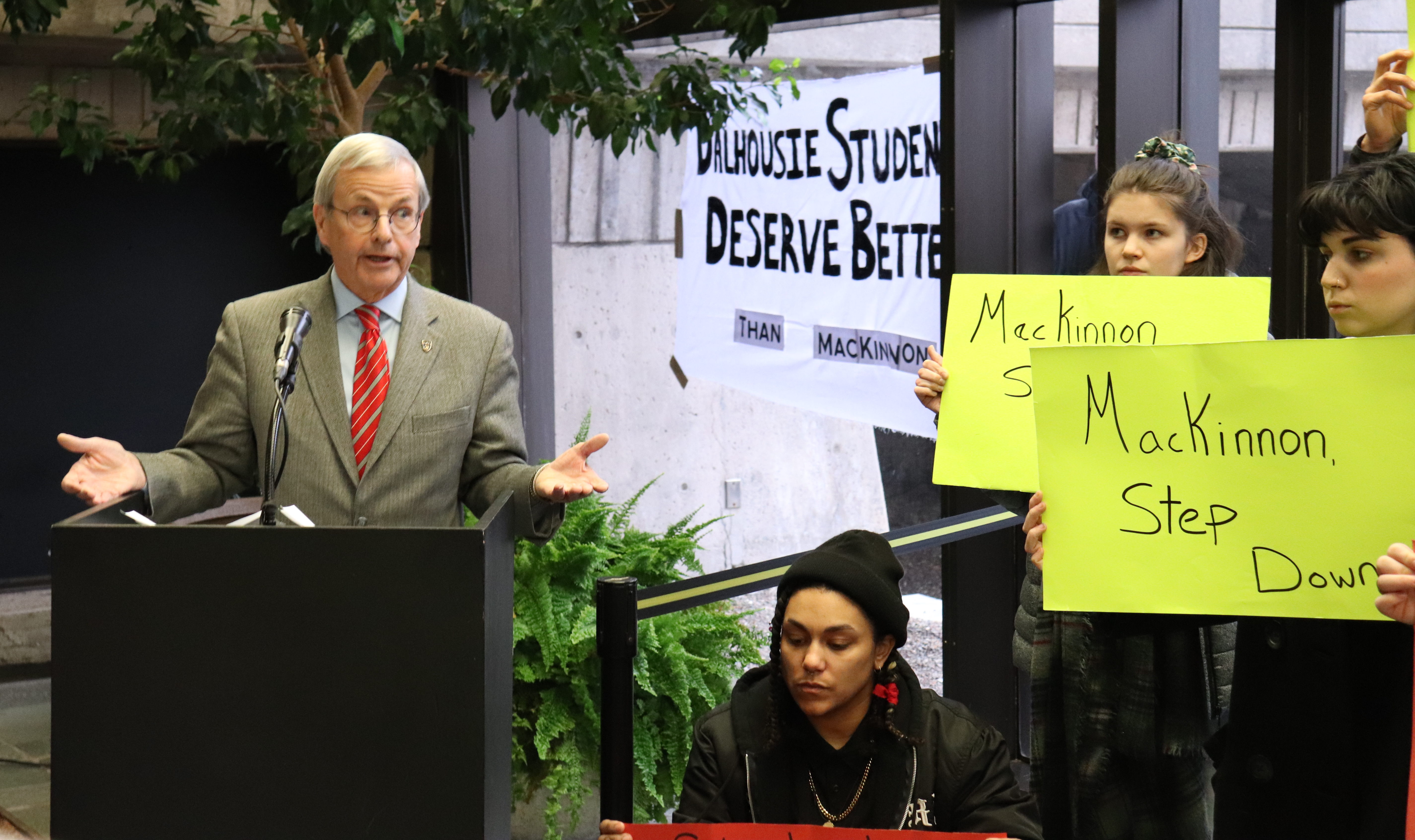 MacKinnon speaks while the student protesters silently hold their signs. “Students call for the immediate removal of Peter MacKinnon,” reads one. 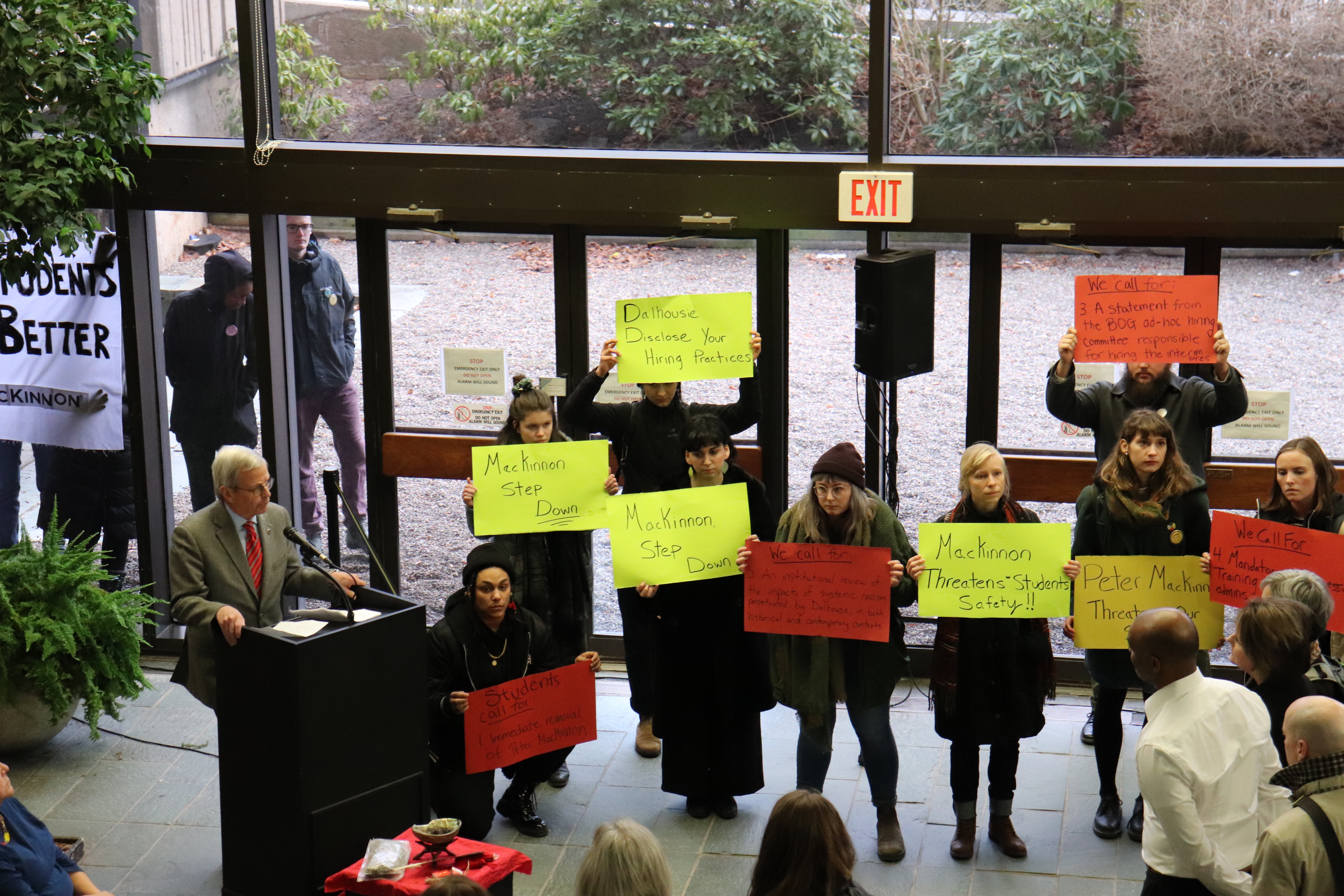 Protesters stood with their signs inside and outside the building during MacKinnon’s speech. 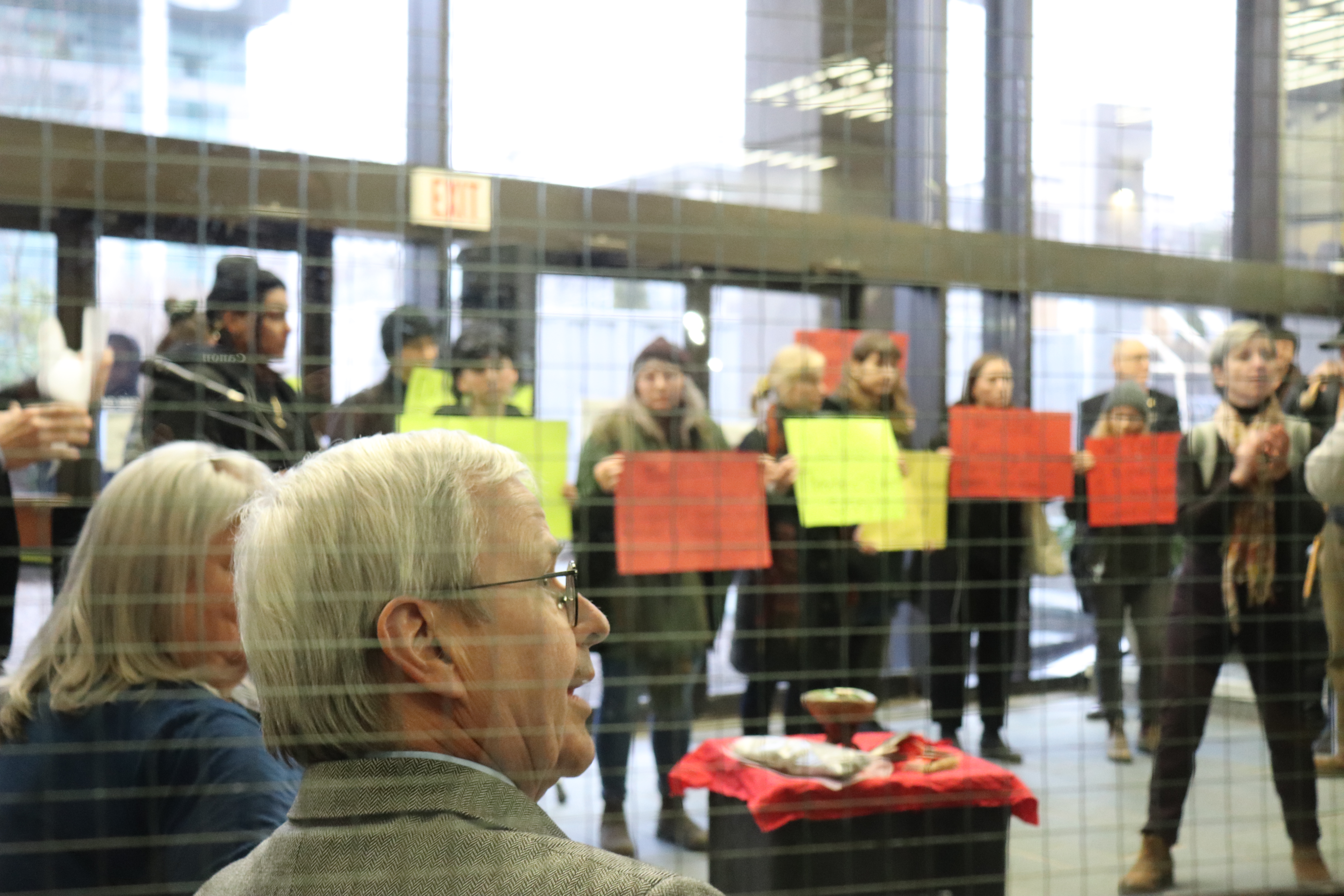 Pictured above, MacKinnon sits down after his speech. On Jan. 28, MacKinnon gave a statement to the Dal Senate (which he later emailed out to the student body) about “concerns” with his book University Commons Divided.s 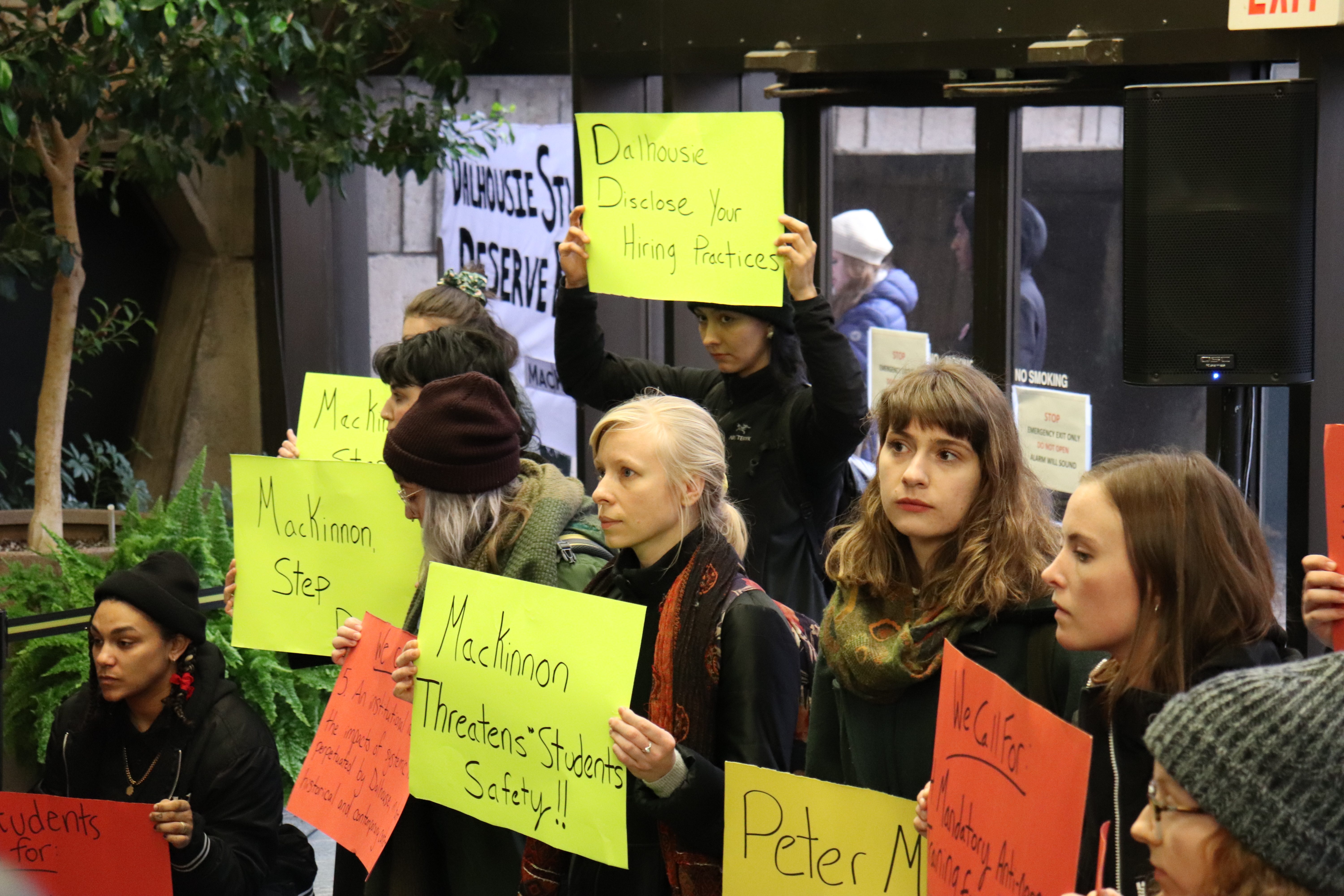 On the signs read their protests of the interim president, their problems with him and demands for the university. “MacKinnon Step Down,” Dalhousie Disclose your Hiring Practices” and “MacKinnon Threatens Students Safety!!” read some of the signs. 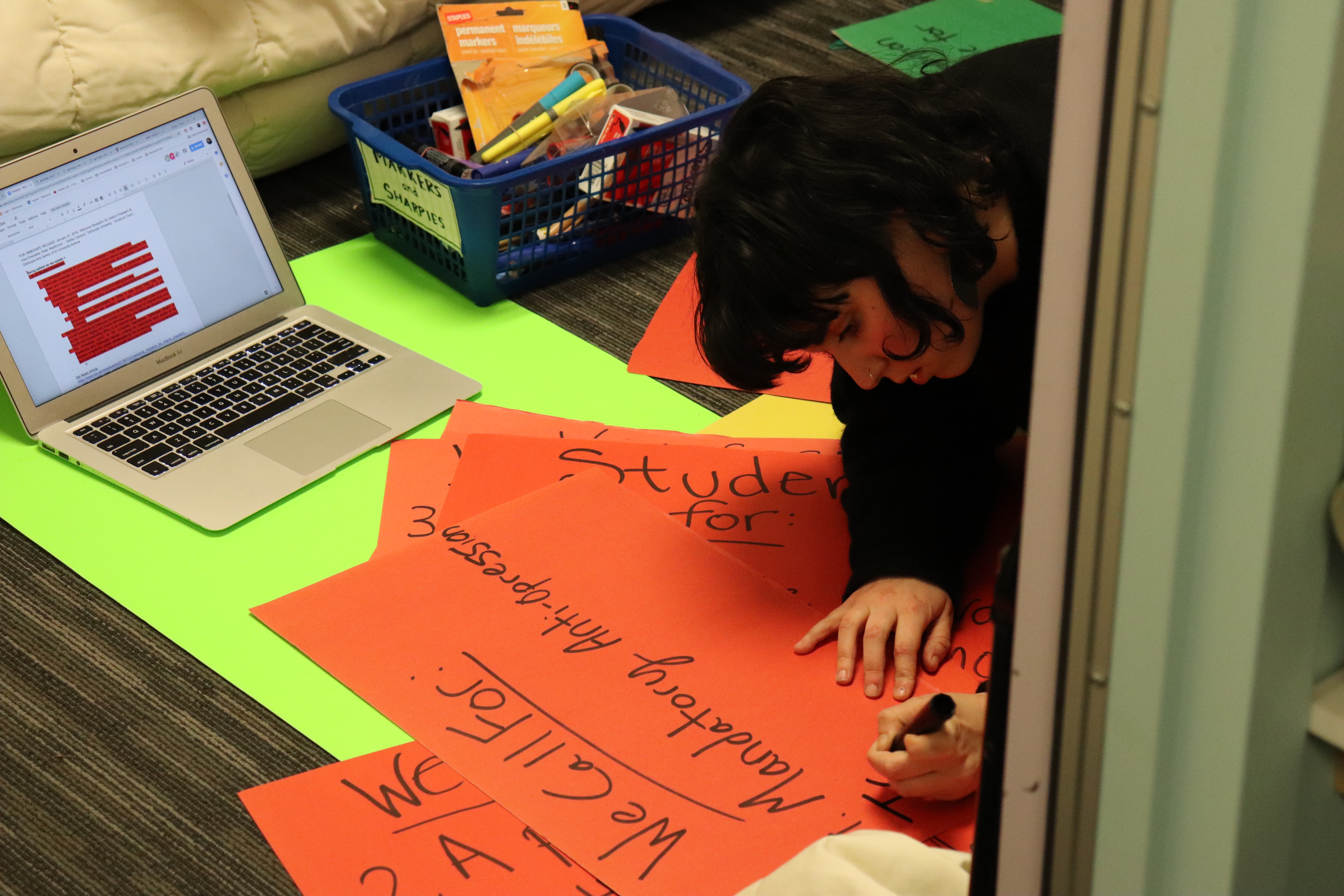 University of Kings College student, Pheobe Lamb, makes signs at the NSPPIRG office before the protest. 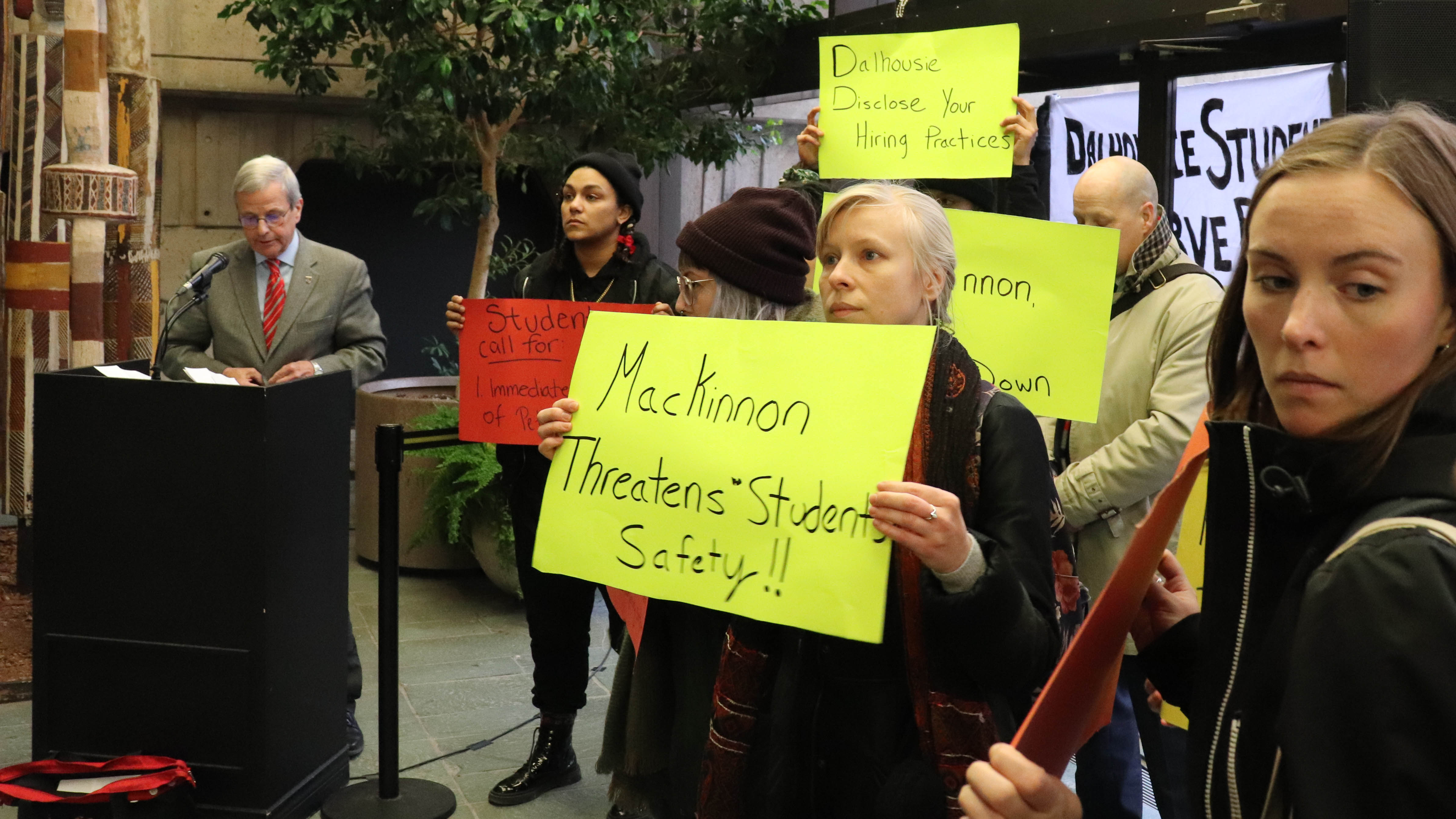 MacKinnon gives his speech at the Jan. 21 Studley campus welcome reception while students stang alongside him, protesting his interim presidency at Dalhousie University.

The demands begin with a call for the immediate removal of Peter MacKinnon as interim president. They continue with the request of a public apology from Dalhousie and the Dalhousie Student Union for the direct and indirect harm caused to students through the hiring of MacKinnon as well as a statement of recognition from the Dalhousie Board of Governors Ad-Hoc Committee who hired MacKinnon and that that a new Committee is created to better represent the “diverse needs and inclusive vision of the University.” 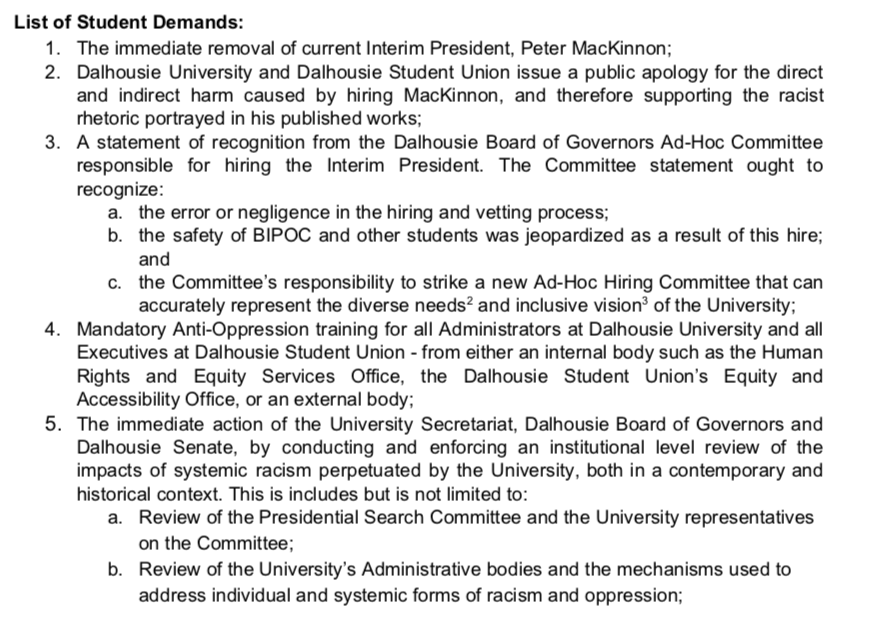 “Peter MacKinnon, as Interim President, is a concern of safety for Black, Indigenous, and students of colour across our campuses,” reads the release from the student protesters.

According to Wright, the protesters haven’t heard much from the school in response to these demands.

“We have had some small offers to meet and Peter Mackinnon did send out an email to students yesterday,” said Wright, “but no amount of meetings will fix the mistakes and the damage done by the lack of consultation with student and faculty, so are demands are clear and until they’re met we will not stop calling for his removal.”

On Jan. 28, MacKinnon emailed out a statement he read aloud during that day’s Dal Senate meeting, reading in short:

Many of the issues I wrote about are contemporary and contentious. Some are discussed in depth; others are mentioned for limited illustrative purposes. I wrote about them for purposes of discussion. I welcome that discussion, and I appreciate the perspectives that have already been shared with me.

The book is about many subjects: university governance, crisis management, academic freedom, freedom of expression, religious freedom and discrimination, and other topics. While I stand by my discussion on these topics, I wish to comment on one matter that has raised concern. I have been interpreted by some as condoning blackface. I do not condone blackface; and I did not condone blackface in the book. I regret any interpretation to the contrary, and the distress it has caused.

Wright said the statement “seemed very insincere,” and it doesn’t change the protesters’ messaging or goal. “The email and his statement do very little to address our concerns and they do nothing to ensure the safety of marginalized students on this campus.”

Khan wrote an opinion piece in the Jan. 31 issue of The Coast: “I’m tired of hearing cis white men uphold their supremacist ideologies by connecting them to freedom of speech,” it reads. “It is not OK, nor is it fair, that people are remaining complicit in upholding these ideologies. This freedom of speech debate isn’t so free.”

While Wright and Xiao plan to host an open forum later this year to allow students to share their experiences and engage with MacKinnon, who has accepted their invitation to attend, they remain steadfast in pursuit of their main demand.

“We will not stop calling for his removal until Dal does decide to remove him or he steps down. We will continue to ask for public accountability from the university.”

Dal spokesperson Brian Leadbetter said MacKinnon was not available for an interview this past week, being “out of the office on university business.”